Red means go for Auckland from Friday as the country enters the traffic light system and a new era in its Covid-19 response.

Most of the rest of the country - aside from parts of Northland, Bay of Plenty and the East Cape - will also be enjoying a return to certain freedoms, with gathering limits lifted for the vaccinated in orange regions.

But while the Covid-19 Protection Framework, coming into force from 11.59pm on Thursday, loosens restrictions for some, it's the opposite for the unvaccinated and regions with low vaccination rates.

Meanwhile iwi members in Northland are planning to block holidaymakers hoping to head there over the Christmas break when Auckland's borders are expected to open on December 15.

A hapū in the Bay of Islands has reportedly sent an email to Prime Minister Jacinda Ardern, police, the local council and district health board saying they are looking at putting up a border of their own around Waitangi and Paihia next month.

The iwi is expected to meet to discuss more about the move today, TVNZ's Breakfast show reported.

It was a direct move to help keep the Covid-19 virus out of the area.

However not everyone supports the idea - with former MP Shane Jones telling Breakfast this was a "misguided publicity stunt".

What will traffic light system mean for music festivals?

Gisborne-based Rhythm and Vines is under increasing pressure to cancel, with iwi and the wider community concerned about the influx of 20,000 punters, many travelling from Auckland.

With Tairāwhiti at the red setting currently with its 100-person limit, even while using the vaccination passes the festival would not be able to go ahead.

And despite high vaccination rates in Auckland, with the city still the centre of the outbreak, and currently-plateauing case numbers expected to rise again once restrictions are relaxed, the region was likely to spend much - if not all - of the summer in red.

ACT and the National Party have criticised the announcement, with even highly-vaccinated areas like Wellington and parts of the South Island without any cases still moving into orange, and with no certainty about when - if ever - they could go green.

"What we need is clarity and consistency," ACT leader David Seymour said. "Why are some areas that have no, or very low rates, of Covid red? Is it to force up vaccination rates? Why, when Auckland has high vaccination rates, is it in red? Why isn't the South Island green?"

The rest of the North Island and South Island will move to orange.

Auckland was in red as the epicentre of the current outbreak, while other regions were in red because of their vaccination rates and vulnerable populations, Ardern said.

"Red provides extra protections against Covid-19, such as requiring both vaccine passes and some capacity limits in the most-high risk settings – that's because if someone has Covid-19, the virus will find it harder to spread among fewer people who are at a distance.

"As we see what happens to cases and vaccination levels we can look to move regions down to orange over time, where there are no gathering limits for those who are using vaccine passes." Under all traffic light settings, events, restaurants, bars, gyms and hairdressers are expected to be able to remain open.

That is, provided they use a vaccine pass to ensure only vaccinated people are using their services.

Only under the red setting do events and gyms become limited as they have to restrict the number of people in attendance to 100 or fewer, while hairdressers also have to maintain stricter public health measures.

For those not using vaccine passes, close-proximity businesses - such as hairdressers - are not able to operate. In gatherings that are allowed, numbers are limited to 25.

Ardern said no areas were at green as we needed to wait for vaccination rates to rise nationwide and allow the new framework to bed in.

Settings would be reviewed every two weeks.

"We have been cautious with this initial designation of traffic lights as the new framework beds in." 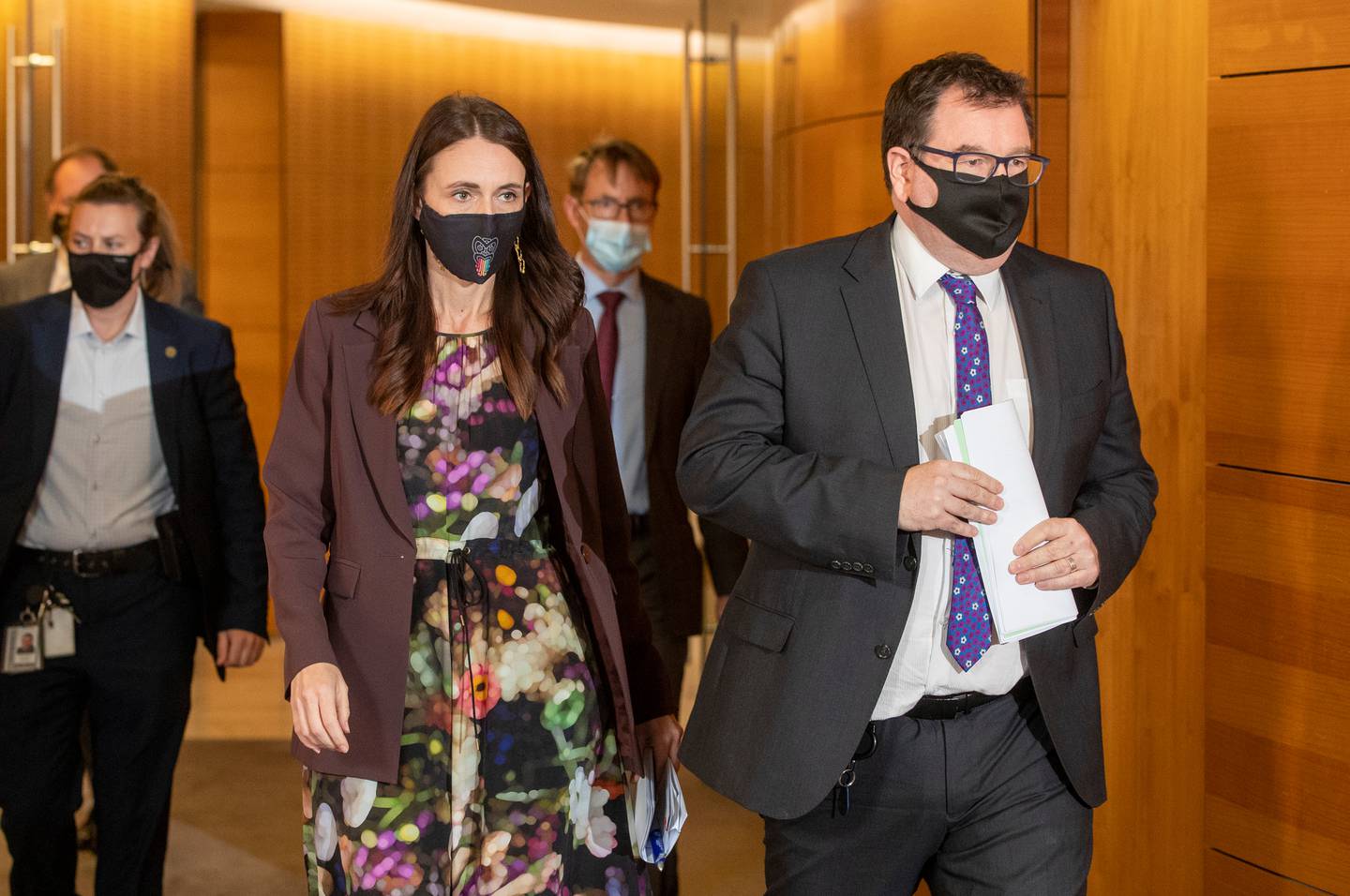 Factors considered when setting the colours in each region include vaccination, the state of the health system, testing, contact tracing and case management capacity, as well as the rate and effect of Covid-19 transmission.

Just over 92 per cent of the country's eligible population aged 12 and over have had at least one dose, and 85 per cent are now fully vaccinated.

Of the total population, this equates to 78 and 72 per cent respectively.

There still exist vast inequities, however, largely correlating with access issues and deprivation levels, but also due to the way the vaccine rollout was structured to prioritise older age groups.

Māori, who make up a much younger population overall, are at 82 per cent first dose and 68 per cent two doses in the eligible populations.

At a total population level this drops to just 61 per cent first dose, and 50 per cent second dose (due to a known 7 per cent health data undercount, this could be even lower).

Te Pūnaha Matatini Covid modeller Professor Michael Plank said in moving to the new system we must not lose sight of these "big gaps in our vaccine coverage".

"The virus will find and exploit these gaps so we must redouble our efforts to fill them."

The move to red in Auckland seemed "reasonable" given good vaccination rates, the fact that cases have levelled off and hospitalisations remain at manageable levels, he said.

Ardern, in addressing the Omicron variant, said New Zealand did not have the new variant but it was a reminder why strong, ongoing pandemic responses were needed.

Finance Minister Grant Robertson announced one-off payments of up to $24,000 in Government support as businesses moved into the new traffic light system.

Robertson said $6 billion had been spent in support payments since August.

Meanwhile, a report released into the deaths of two Auckland Covid patients' in home isolation found they were "potentially preventable".

The independent review panel concluded: "The panel also considered both deaths were potentially preventable and there were missed opportunities contributing to the outcome."

Director general of health Dr Ashley Bloomfield said improvements had already been made.

Health minister Andrew Little said some areas moving to red had lower vaccination numbers and were areas were where they expected people to travel to in numbers during summer so they needed to have restrictions in place to stop the crowding.

Little said the vaccination numbers in Tairawhiti needed to go up especially for Māori.

"There's a lot of concern in the community at the moment about Rhythm and Vines anyway because people are terrified of a whole horde of people, a lot of them from Auckland coming down and crowding out a reasonably confined space.

The health system was coping at the moment and would continue to cope.

Even moving to the orange traffic light only vaccinated people would be able to attend the event.

He said the organisers knew the conditions and it was their call whether to cancel it.
Little said if you were hosting gatherings and you trusted that the people were vaccinated then that would be enough.

"If these are people you know - family members, close friends - you trust them when they tell you they've been vaccinated, you accept that then that's going to be acceptable."

Anyone else, you should be scanning their vaccine pass, he told Newstalk ZB.

If there was an outbreak and it was traced back to your party then questions would be asked and there could be an infringement if you've breached that rule. He said it "feels a bit weird", but it was about ensuring everybody was safe from infection, he said.

When asked if people could hug at a bar on Friday when Auckland moved to the red traffic light, Little said people should use their judgement and if it was someone you hadn't seen for a long time then it might be worth still keeping your distance and doing a "virtual hug".

"There are ways of showing affection to people who you like and haven't seen for a while that doesn't involve close contact."

"This thing is still around and there will be some people who will not want to be hugged, they just want to take care of themselves too and they just don't know where people have been."

Sharing a taxi with other people was okay if you were wearing masks and spaced. Masks were going to come off if you were having a cup of tea or it would be "a very soggy mess", but just keep a little distance if you haven't seen each other for a while, he said.

Little said they needed to know more about Omicron and the level of severity of illness it caused. New Zealand wasn't due to open its borders until mid-January to Kiwis in Australia so they would just keep an eye on what's happening in the rest of the world for now.