The small Waikato surfer town at the centre of a Covid-19 outbreak is shaking off its anti-vaxxing image with increasing numbers of locals getting the jab.

The one positive Raglan Covid case and their three household members have been moved to Auckland's Jet Park quarantine facility, along with another person from Hamilton East who tested positive at the weekend.

But it remains unclear how long the outbreak will remain low as the Herald has learned of a boxing match taking place recently between one of the positive Raglan cases and another local who is now going to get tested.

However, despite the scare and it involving someone who was unvaccinated it has seen a steady stream of people head to Raglan's vaccination centre at the local school.

Councillor Lisa Thomsen has been helping out with the vaccination effort since Sunday and said people with long-held anti-vaccination views had since changed their mind now the virus was in the community.

"We've had a few people through who labelled themselves as anti-vaxxers but you know, as this is quite real, they are taking action."

According to Ministry of Health data, just 38 per cent of the Raglan population is fully vaccinated, compared to 78 per cent of those in Hamilton city.

At the vaccination centre on Sunday, Thomsen said they had 86 people through and yesterday that shot up to 145.

However, she expects that number to increase today as they had more staff on board.

"Given that we have only had one vaccinator on yesterday morning and three in the afternoon it was a slow process but we got there and I'm just really grateful that the community is stepping up and that we're able to be really proactive about this.

Thomsen said there were already several cars lined up before they opened up at 9am.

"The lovely ladies from the health clinic from Hamilton are here and setting up.

"We're being quite systematic about getting people parked and getting them in for vaccination when we get there.

"It's really great. It's all on now, people are coming in."

Raglan community board member Chris Rayner said he'd been lucky enough not to be at any of the current places of interest or displaying any symptoms that would currently warrant a Covid test.

However, he did know the testing centre had been incredibly busy the past couple of days.

With health officials reiterating that people only seek a test if they had been to a location or had symptoms, he expected numbers to be smaller today.

"Yeah it's been pretty much non-stop since they've been open. I haven't been down ... but two of my flatmates have been tested and they've both come back negative so that's a good sign so far."

Given the level 3 lockdown he hadn't been out and about in the community but said there was a "wait and see" feel amongst locals and local social media had thrown out a few scenarios. 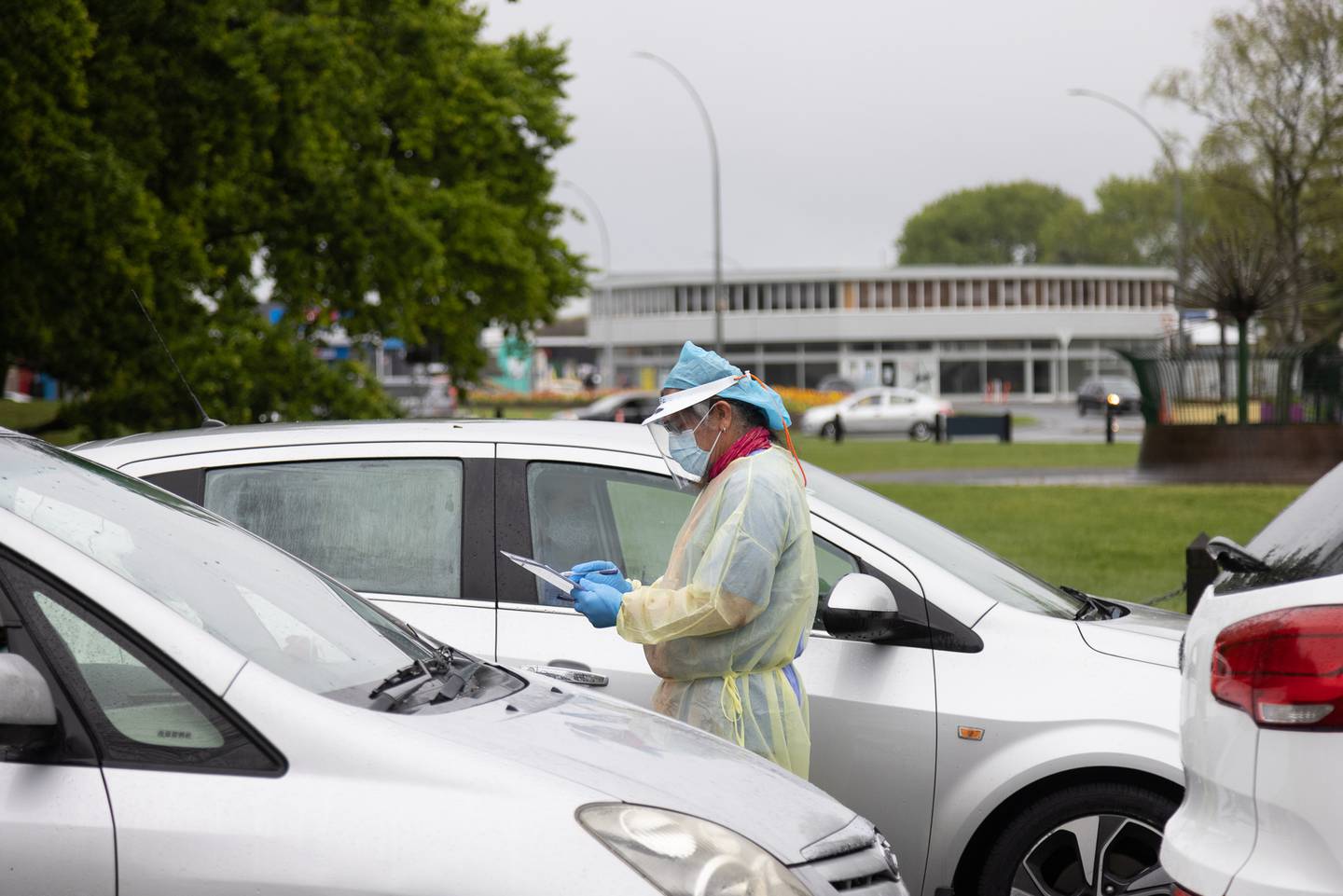 "There has been a big vaccination push which is good. Those numbers are creeping up nicely and is probably the biggest uptake in vaccines that we've had here for a while."

He said there was initially big uptake from the elderly and vulnerable but it was the 25-45s where there'd been some push back.

"From what I'm hearing, a lot of the hesitant people are now going to get the jab."

However, he said it wasn't fair for Raglan to dubbed an "anti-vax" town.

"I think we have a very vocal minority so it might seem like that but if you compare our numbers to Taranaki or rural East Cape or other equivalent size communities I don't know if our rates are that much lower.

"The quite vocal opponents of the vaccine are quite vocal so that does affect what you think and that there's more than what there actually is.

"There's lots of different views but I don't think we deserve the title of some anti-vax capital or some tin-hat town. I think that's a bit over the top."

He was unsure about a further spread of cases, especially after learning this morning there had apparently been a boxing match involving a positive case. A close contact of the fight was now going to get tested, he said.

Waikato Regional Council councillor Fred Lichtwark, who is based in Raglan, said the compliance in the town appeared to be "pretty lax".

While some businesses were following the rules, others were not monitoring numbers in shops or enforcing the use of the tracer app. He was also still seeing some people not wearing masks.

"Our community is coping better in lockdown and we feel more comfortable not having every joe blogs turning up and turning it into a tourist town and bringing in Covid."

Lichtwark said it should be a good lesson for other communities to get vaccinated.

When talking about the small number of locations on TVNZ this morning, Deputy Prime Minister Grant Robertson said some of the locations of interest linked to recent cases identified in the Waikato region - particularly in Hamilton - had instead been named as exposure events and would not necessarily be posted up as a location of interest.

That was because everyone connected to that place of interest - for example, a workplace - had been identified and could be identified.

The initial Raglan and Hamilton case were known to each other and it had been linked through genome sequencing to the Auckland outbreak.

A steady stream of people also lined up at the two Covid testing centres in Hamilton yesterday, Founders Theatre and Claudelands.

There had been frustration at the city sites yesterday due to long delays and people getting turned away.

Hamilton Mayor Paula Southgate said the lack of locations was "wildly frustrating" but she knew that health staff and contact tracers were doing all they could.

"It's causing real angst and concern from people who just want to do the right thing. Some people are genuinely really fearful and that's distressing.

"It's also making the situations at our testing stations worse.

"Having locations known to everyone acts as a filter and means some people without symptoms, who haven't been to a location of interest, don't go. But in the absence of that information, people are trying to do the right thing and get tested just in case so testing stations are under real pressure.

"I'm sure there's a good reason for it, but for goodness sake, we need this information and we need it now."

Riki Nia Nia, Executive Director Māori, Equity and Health Improvement, said the DHB team were "working at pace" but had not yet identified any public locations of significant interest in the city.

"Potential exposure events have generally been direct interactions between individuals (or within workplaces) which we have been able to follow up on directly.

"In these circumstances anyone identified as a contact is called directly by Public Health. We are continuing investigations with those newer cases announced yesterday and will provide updates as this progresses."

There were 6000 swabs taken yesterday so they expected to have a clearer picture emerge today of how widespread, if any, Covid could be.

He accepted the lack of significant locations of interest shared publicly was likely contributing to the extreme demand for testing.

"We have seen that when locations of interest are announced, this has reduced demand for testing as people have that reassurance of whether they have risk and meet the criteria for testing or not."

Hamilton, Raglan and its northwestern surrounds was now in level 3 with a "soft border" which Prime Minister Jacinda Ardern yesterday dubbed "pragmatic".

She told the AM Show that a hard border was needed in Auckland because the outbreak was widespread. But even border checks didn't make that iron-cast - it was not a guarantee.

Level 2 in other places was because of the possibility of the virus getting out.

The soft border in the Waikato was "pragmatic" as there were a large number of roads in and out of Hamilton.