Auckland's Mayor Phil Goff and hospitality representatives are calling for the Government to shift Auckland to orange on the Covid traffic light system before Christmas – rather than leaving them to face another month at the red setting.

Cabinet will decide today whether Auckland and other red regions can move to the orange setting ahead of Christmas - and there are calls to ease up in Auckland given its high vaccination rates and signs the Covid-19 outbreak and hospitalisations are under control.

Asked by TVNZ today if she was "buggered", Prime Minister Jacinda Ardern said: "I feel a weariness, but no more than the rest of the country."

Ahead of today's big announcement at 4pm - revealing whether or not there will be further movement down in the traffic light system, she said: "We do want to be cautious"

The country still needed to be careful as we are in a transitional state.

On the Omicron variant, Ardern acknowledged that the border measures at the moment would help to keep it out of New Zealand.

Vaccinations remained another key tool of protection. But she acknowledged that the latest information was that the new variant was more transmissible than Delta.

"It's good to have a bit more time to see that (information) in full."

On whether officials may hold off opening borders early next year - in light of the Omicron variant - Ardern said more would be known next month.

'Ten days is just too soon'

Bars were the only ones keen to move as most restaurants seemed to be doing OK, he told RNZ.

"Ten days is just too soon."

This decade was going to be the decade of vaccinations and it was the only way we would get back to any resemblance of normal, he said.

New Zealand had done amazingly well to reach the targets it had so far and it just needed to keep going.

"If we loosen restrictions more we are going to end up going up again by the end of the year."

Australia was a good indication of what happened when restrictions loosened and case numbers were already rising again in NSW cases and no longer dropping in Victoria.

"As soon as it [case numbers[ starts going up, you have to start putting in controls."

Most countries around the world were re-introducing restrictions with 18 out of 20 countries he had looked at this morning seeing case numbers rise.

Jackson said going cautiously might be the answer to not having to do the same in New Zealand.

New Zealand could potentially see boosters brought forward and being introduced three months after the second shot, but he wanted to see more data on the Pfizer vaccine first.

There was still not enough information on Omicron, but he expected that to change by the end of the year.

It follows an apparent easing in the outbreak: there were 63 new cases of Covid-19 recorded on Saturday, although that bumped back up to 103 in Sunday's numbers. There were 61 people in hospital, and only three in ICU. All of Auckland's DHBs are over the 90 per cent double-vaccinated rate.

Goff said he was hoping Auckland would move to orange "but I think it's probably in the balance at the moment".

He noted some experts had said it was still too early to assess the impact of the move from lockdown to the red setting.

"But there are a number of things aligning that would make it perfectly possible and desirable to go into orange. So my hope is that we will go into orange, but I'm not absolutely certain the Government is ready to take that step yet.

"The Government has a track record of being quite cautious, and I suppose we should be grateful for that. But I think we are on the cusp of going into orange." 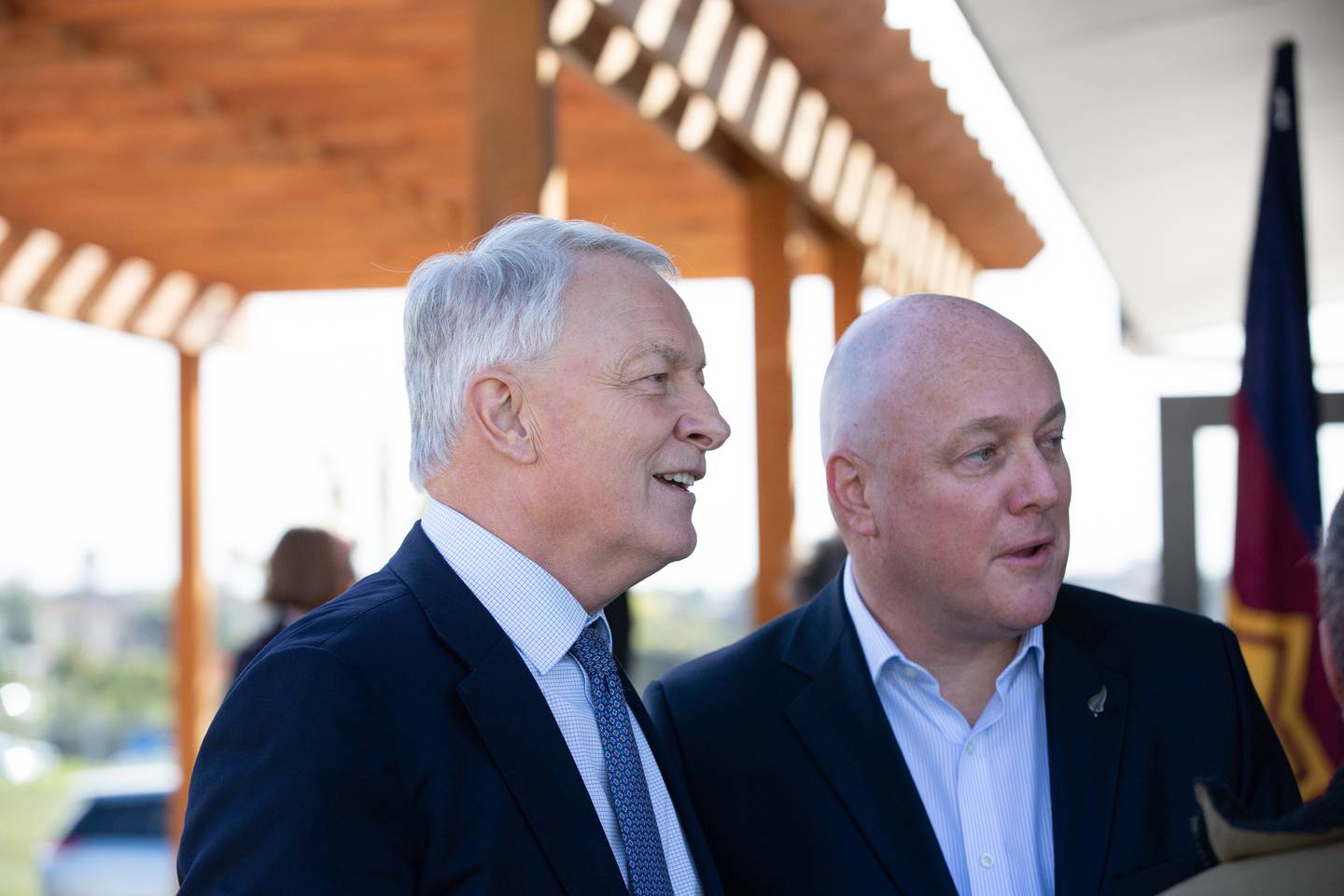 National Party leader Christopher Luxon said he could see no reason why Auckland should stay at red.

"Auckland should be in orange. There's no way the system is under massive stress and overwhelmed, we've got cases trending down, there are only three people in ICU. I just couldn't understand how you couldn't move to orange. What else do you need?"

However, Te Pūnaha Matatini Covid-19 modeller Professor Michael Plank said after just 10 days it was still too early to judge whether the move from lockdown to traffic lights had impacted on the outbreak.

"Over time if cases in Auckland remain at a manageable level or even continue to fall I think there would be a strong case for moving Auckland to orange. But I think a cautious approach is warranted because we are still yet to see what effect it is going to have."

He said it was also important to keep cases as low as possible ahead of Auckland's boundary re-opening and summer travel – to reduce the risk of Covid-positive people getting to low vaccinated regions.

A spokesperson for Prime Minister Jacinda Ardern said the Government was cautiously optimistic about cases coming down in Auckland since the move to the traffic light system.

"But with the border opening up on Wednesday there are a range of risks Cabinet will be weighing up in determining any changes to existing settings.

"The primary objective is to ensure cases stay at a manageable level over summer so New Zealanders can enjoy the holiday they deserve."

Whatever the Government decides today could be in place for the next month while the Beehive packs up to go on holiday. Barring an emergency, the group of ministers charged with Covid-19 decisions are not scheduled to re-consider those settings until January 17.

Hospitality NZ head Julie White said she saw no logic in keeping Auckland at red, especially if it was going to be a full month before Cabinet reviewed the settings again.

"We need as much help as possible, and we are really concerned Parliament is shutting down for the year. Ministers are going back to their electorates and yet the job is not done as far as we are concerned."

Restaurant Association head Marisa Bidois and Heart of the City chief executive Viv Beck also called for orange now. Bidois said the number and distancing restrictions of the red level made it difficult for many dining places. Many workplaces also still had their staff working from home, which was killing lunchtime trade.

Beck said spending was more than 40 per cent down on average and bookings were weak through to January.

"Monday's decision is critical - we must see a shift to at least orange. Auckland has been somewhat of a sacrificial lamb through Covid and our businesses must be supported."

Cabinet will also review the settings of other regions - although the chances of any moving to green are slim while Auckland's outbreak continues.

For other regions still at red, the main consideration is likely to be vaccination levels.

Northland is now the only one of those regions that is yet to hit 90 per cent single vaccinated figures – and some are close to 90 per cent for double vaccinations.

Plank said that could well see those regions moved to orange, but it would be important to also look at specific areas or groups such as Maori in those wider regions to ensure they were not put at risk.

"That's particularly if they are remote or not well-served by health care systems. That would be a factor in the decision making."