Protesters have made their way onto Parliament's forecourt after breaching the first set of gates during a demonstration challenging Covid restrictions.

There is still a set of gates preventing them from accessing the steps leading to Parliament buildings.

Thousands of protesters brought Wellington's CBD to a standstill this morning as they marched to Parliament in a challenge to Covid restrictions.

Insults and tennis balls have reportedly been hurled at media, and protesters have attempted to get over the barricades towards Parliament.

The Freedoms and Rights Coalition marched to Parliament this morning to present its demands, which include an end to Covid restrictions and vaccine mandates.

At around 11.45 a group of around 100 motorbikes arrived at Parliament, followed by thousands of protesters shouting "freedom now!"

Those in the crowds include young and old, and a diverse mix of ethnicities. Protest signs range from anti-vaccine to "Trump 2020", alongside tino rangatiratanga and United Tribes flags.

Act Party leader David Seymour said the Government had antagonised people such as some of the protesters outside by issuing vaccine mandates.

Seymour said he hoped as many people as possible got vaccinated but people should still be given choices.

"I don't fear those people. I fear for them," Seymour said when asked about the crowds outside.

Earlier Rewi Hare of Destiny Church addressed the crowd, saying people have gathered from "top of the North Island to the bottom of the South".

He praised the "brave" Brian Tamaki for "standing up to the Government", to loud cheers.

Wellington City Council advised that traffic would be disrupted after 10.30am, and Parliament's Speaker Trevor Mallard said security had never been as tight as it was today.

He said the Parliament grounds are crawling with police and security and they've blocked off all entrances apart from one.

National Party leader Judith Collins also said she had never seen so much security, but hoped the protests would be peaceful.

Parliament's main entrances are all locked down and some protesters have set up ahead of the main march arriving.

A contingent of police are also on the grounds, but are so far keeping a low profile.

People who work there have also been warned to stay alert and report any suspicious behaviour.

Protesters gathering at Parliament earlier this morning included a group of about 30 who travelled down from Whakatāne.

They said they include teachers and even a principal, all opposed to the vaccine mandate which requires a first dose by November 15.

One of the protesters, a special needs teacher of over 20 years' experience, said she is prepared to leave her job, as are many others. 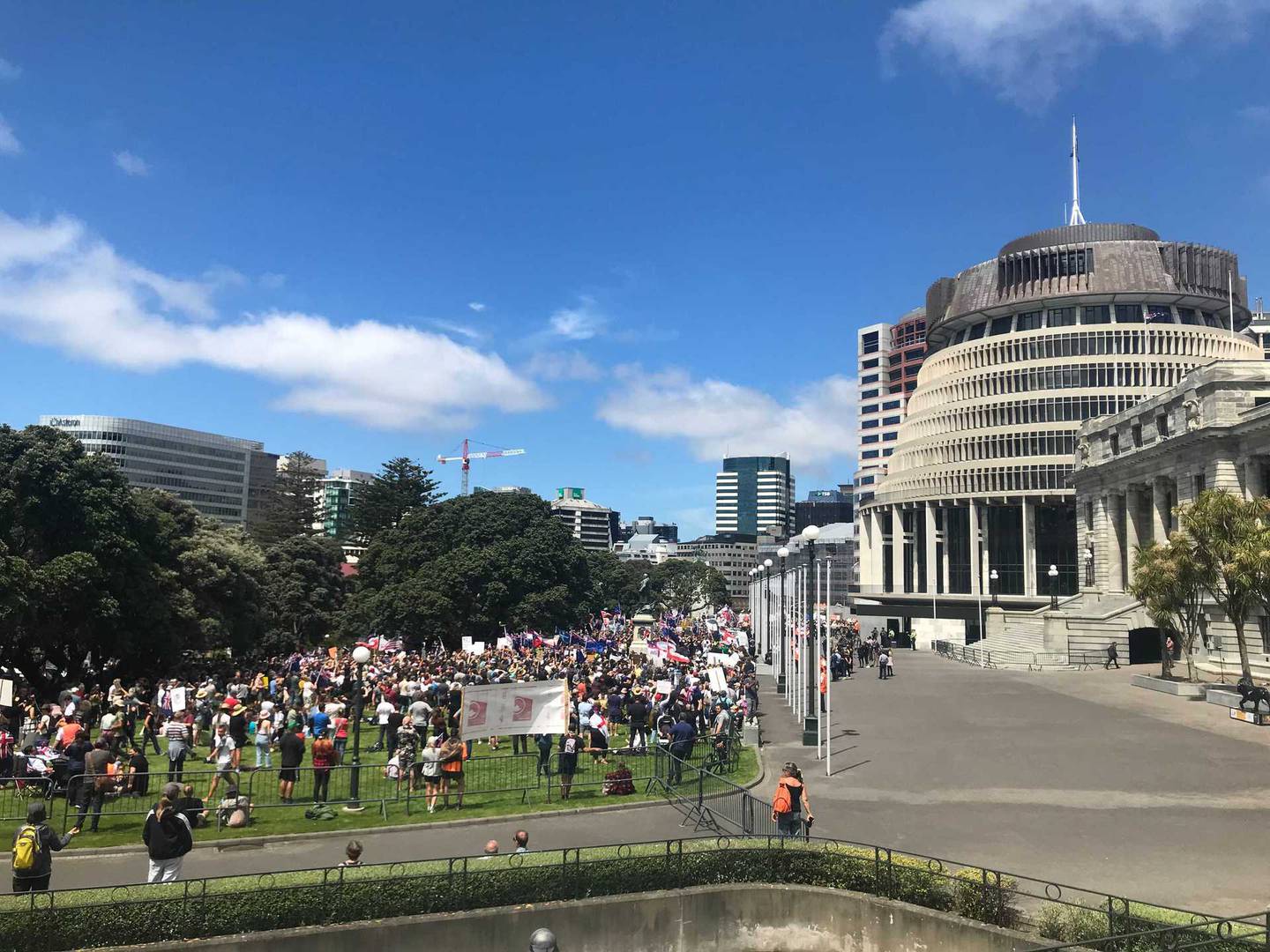 Thousands of protesters have descended on Parliament. (Photo / Michael Neilson)

She said about 2000 people have travelled from Whakatāne and the wider region for today's protest.

The woman, who refused to give her name, said she was concerned about Covid-19 but didn't trust the vaccine nor the Government.

The protest organisers say they want New Zealand to "learn to live with the virus". They are calling for an end to the restrictions which have so far prevented the mass illness and death seen in other countries.

They want Auckland's borders to be opened, the whole country to move to alert level 1 and an end to "no jab, no job" vaccine mandates. 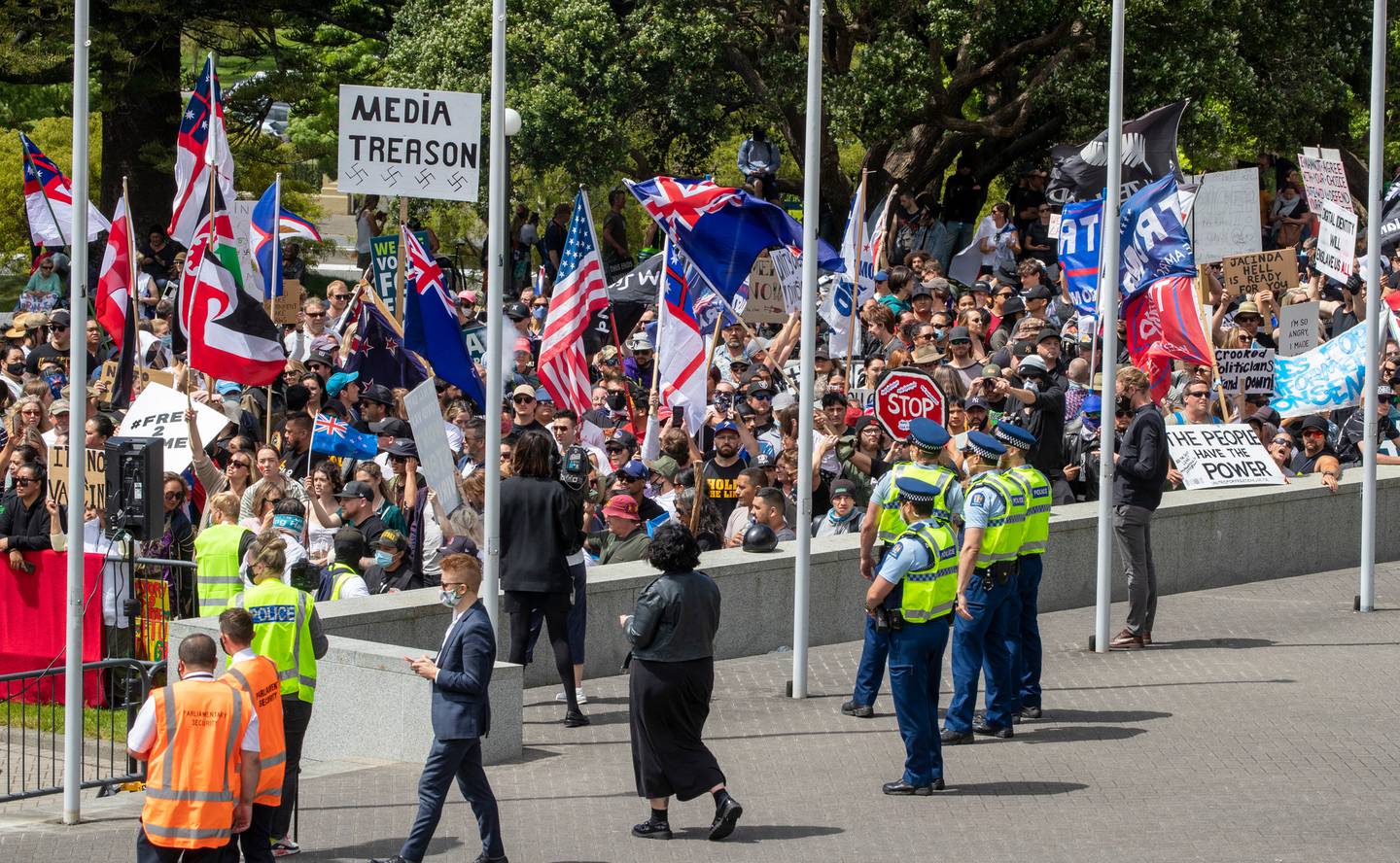 Metlink has advised it will continue to operate despite the disruption to routes caused by protest action.

Metlink general manager Scott Gallagher said they were putting the diversion in place to protect the safety of passengers and drivers.

"However, this is an evolving situation which will be closely monitored. We will update customers with any further changes, should they be necessary, as soon as we are able."

Police are also preparing for possible blockades at Auckland's borders and say there will be a "heightened presence" at other Auckland locations such as Government House and MPs' electorate offices.

Officers could be seen standing in front of a large truck, blocking protesters.

A small group of protestors have gathered at Auckland's Government House in Epsom. Video / Dean Purcell

The Freedoms and Rights Coalition is organising a march through Wellington to Parliament today to present a range of demands to lift lockdown restrictions.

Police were preparing for blockades at Auckland's borders and say there will be a "heightened presence" at other Auckland locations such as Government House and MPs' electorate offices.

In a statement on Tuesday morning, the Freedoms and Rights Coalition said the group will present its "realistic demands" on the steps of Parliament.

The group is calling for an end to lockdowns and public health measures, saying it's "time to learn to live with Covid-19", "shut down testing stations", and treat the deadly virus like "the flu".

"This government will have until this Friday 12th November 2021 at 2pm to take affirmative steps. If 'No-One' from within our House of Representatives is prepared to make moves for us, it will be time for 'we the people' to take matters into our hands as we undertake THE GREAT GRIDLOCK across many parts of this nation, unlike anything ever seen before," the group said.