Cabinet has made an in-principle decision to move Auckland to level three, step two from next Tuesday at 11.59pm.

Waikato will also see an easing of restrictions from tomorrow at 11.59pm. That will mean retail and public facilities could re-open and the number of people who could meet outside increase to 25.

Prime Minister Jacinda Ardern said the Government's approach was necessarily careful. Senior students had only just been allowed to return, and changes such as that needed to be bedded in before a move.

Ardern said the move to step two next week would remove "some of the pressure and fatigue that we know exists in Auckland". The rest of the country's alert levels would remain the same, Ardern said.

Vaccination certificates are not part of the current alert levels, so will not apply once retailers re-open, Ardern said. Work on those certificates was due by the end of the month, but other forms of proof could be used if needed earlier.

Ardern was reluctant to bring in the traffic light and vaccinations certificates system earlier, saying that health advice was to wait until vaccination levels were high enough first.

On the Auckland boundary, Ardern said "I don't want anyone to live with the belief that we can keep Delta in one place, and one place only, forever."

"The boundary we have now, and the work Auckland has done, has given us time but we will not be able to contain it." She said the boundary had given other regions the opportunity to increase vaccination rates.

Ardern said there were now more tools than there had been when the pandemic started. "Despite how hard everything feels right now, we are going to be okay."

She said high vaccination levels gave the Government the ability to ease restrictions safely and carefully. The growth in cases was not unexpected, but hospitalisations were "very manageable" and that was the impact vaccinations were having.

Director general of health Dr Ashley Bloomfield said the low number of deaths in this outbreak was because of vaccinations, and the young age of those admitted - only 22 had been older than 65.

He said on the projections in the modelling, the ICU units would not be overwhelmed, even at the higher projected rates.

Bloomfield said the initial written advice to Cabinet had been to hold Auckland at the same levels without any set time to change it. However, after further discussions with public health workers in Auckland, and Cabinet discussion, Cabinet decided to set out the provisional easing of restrictions in a week's time.

In a week's time, Bloomfield said he would be asked again whether there was anything that warranted not moving ahead with that easing before it became final.

Ardern said she did have to take into account the length of time restrictions were in place and the ability of people to comply with them. She said the restrictions had made a difference, compared to the overseas experience Auckland had fared much better than other cities.

She rejected comparisons with Australia, which is re-opening its borders, saying New Zealand had always carved its own path. Ardern said it would take time to digest the rules of the new traffic lights system when it came into effect, but she believed it would make sense and be easy to operate for businesses that needed the certainty of it.

She said the most difficult period we would face was right now, when Auckland was rising in vaccination levels but the rest of New Zealand was a bit behind. The whole country could not shift until all regions lifted.

Asked about the division between the vaccinated and unvaccinated, Ardern said most countries had faced the same problem and it was important to keep an environment where people could ask questions and raise concerns.

Ardern said the 90 per cent goal across all DHBs was because it was important that all parts of the country were protected. She said Covid-19 did not only thrive in cities - in this outbreak it had come up in small, remote communities already.

On the modelling showing that cases could soon rise to 1400 a week, and whether that would imperil plans to open more widely before Christmas, Ardern said by that stage 90 per cent of eligible Aucklanders would be double-vaccinated.

"We are already a highly vaccinated population. But we cannot have a situation where we have good high rates in areas and across suburbs, but we don't ease restrictions."

Asked if we New Zealand was still on track for a good summer, Ardern said "yes, yes we are". However, all parts of the country would need to follow Auckland's lead on vaccination rates, she said.

On whether vaccinators would go to schools, Ardern said they did support schools that wished to have them provided on-site but that had not been a key part of the rollout as yet. 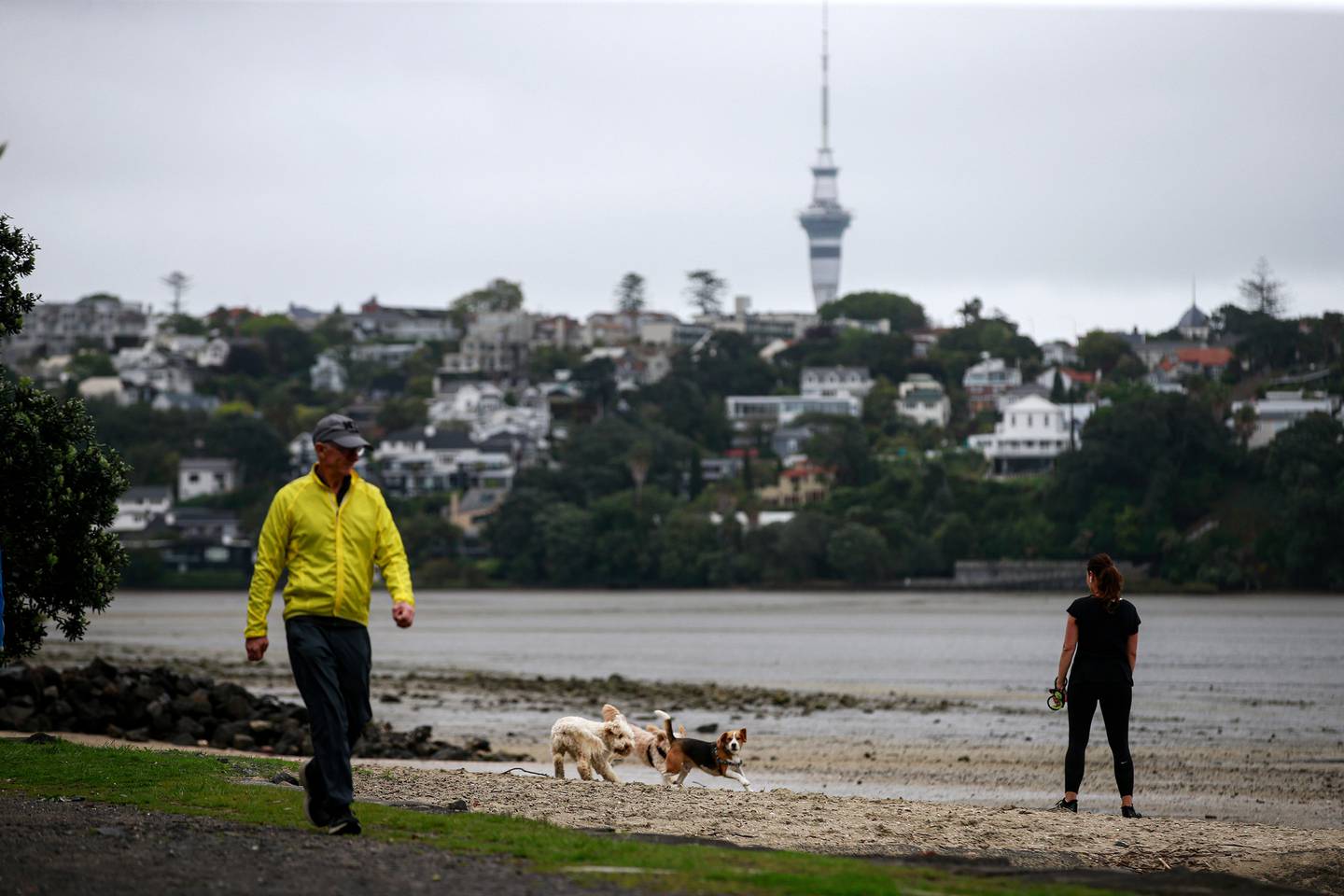 Ardern said Aucklanders should still be careful not to meet indoors but to keep their gatherings outside.

She said opening retail and allowing larger outdoors gatherings could be done safely. Only about two cases had come about from outdoor gatherings since they were first allowed.

Ardern rejected any suggestion that easing restrictions was throwing Maori under the bus because of their lower vaccination levels. She said there was only so long she could keep asking people to abide by hard restrictions.

Today's announcement comes as Auckland enters its 12th week in lockdown in a bid to contain the Delta outbreak that began in August and has now reached 3510 cases.

There were 162 new cases reported on Monday - a new daily record.

There was one new case in Northland, bringing the total number of cases in the region to 13. All of the cases were isolating at home with public health oversight.

Of the other new cases, 156 are in Auckland and five in Waikato. There were no new cases in Christchurch. The four household contacts of the person who travelled to Tonga were still in isolation after initial tests. It was being investigated to assess whether it was historical.

Bloomfield said he believed there was a low risk of undetected transmission in Christchurch, but testing levels should stay high to be sure. On wastewater detections, he said the catchments involved were those in which already known cases lived, and one was the area of a case out of MIQ.

Bloomfield said the number of Maori cases had risen in the later part of the outbreak, while Pacific cases had dropped. New Zealand's overall positivity rate was still one of the lowest in the OECD, he said.

Meanwhile, 53 people are in hospital, and three in ICU.

These numbers have remained relatively steady since the outbreak began despite a steady rise in daily case numbers, indicating a drop in the hospitalisation rate.

This has accompanied an increasing proportion of those infected being vaccinated. 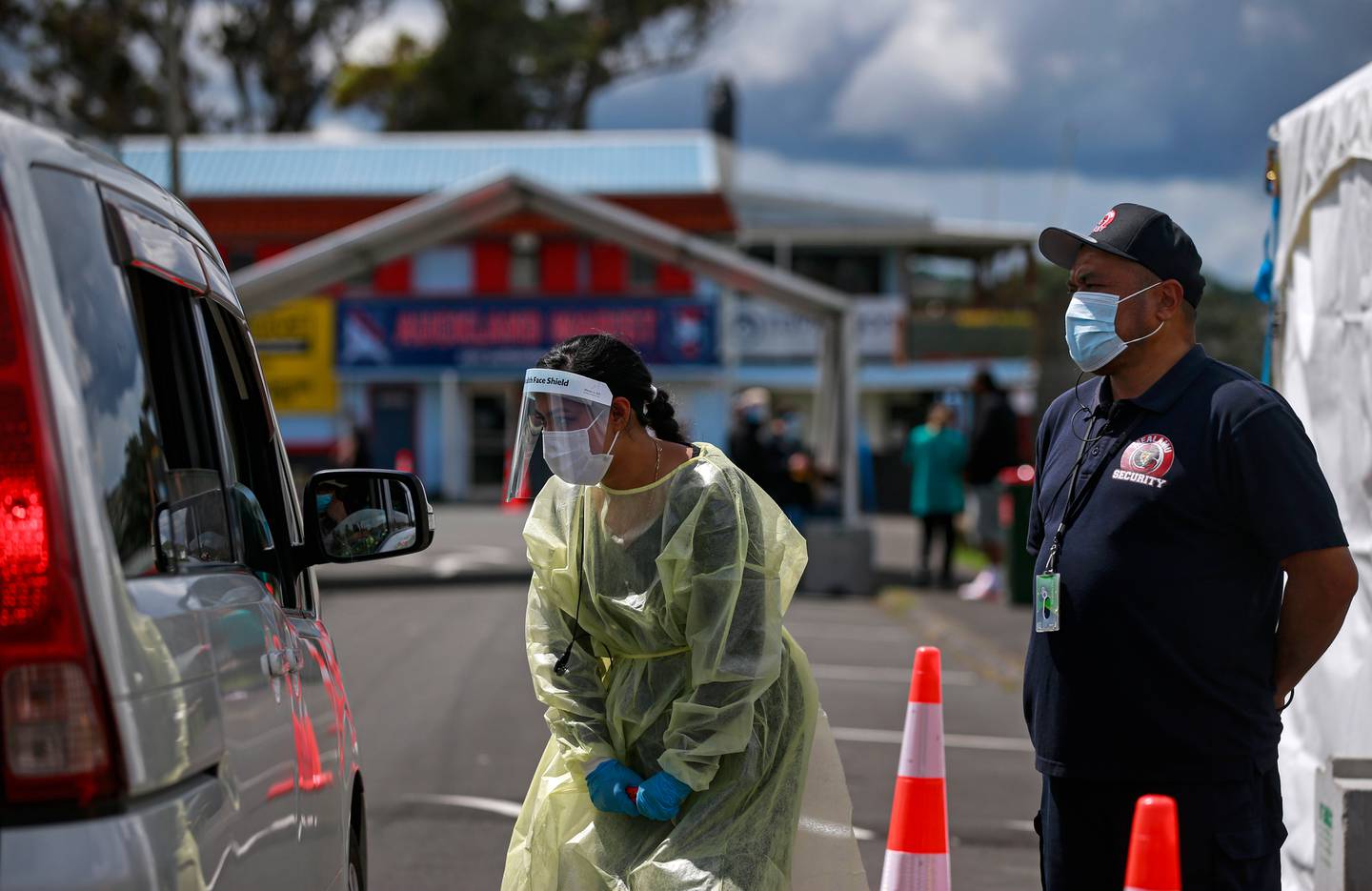 Just over 75 per cent of the eligible population aged over 12 have now had two doses of the Pfizer vaccine. Photo / Alex Burton

As of today, just over 75 per cent of the eligible population - aged over 12 - have had two doses of the Pfizer vaccine, and just over 88 per cent received at least one dose. The 80 per cent fully vaccinated milestone should be reached next week.

Of those infected in this outbreak, the proportion without a single dose has dropped from 82 per cent on September 9 to 72 per cent.

Meanwhile, the hospitalisation rate has dropped from 9.7 per cent to 7.4 per cent over the same period.

Ardern revealed this morning that current modelling showed there could be a peak of up to 200 community cases per day this month.

Ardern said it was expected that cases would go up, but that did not mean restrictions had not played a role. She said modellers believe this month would start to show the impact of vaccinations.

"You can see while cases are growing, vaccinations have the ability to keep numbers down overall and to keep hospitalisations down."

However, Ardern said there was a sense of caution about really seeing what the impacts a double-vaccinated population of 80 per cent plus would have on case numbers.

At the moment, case numbers were travelling fairly predictably, but they had to be careful because they didn't want to make a "misstep" before hitting the peak. In terms of reaching the 90 per cent vaccination target, things were tracking really well in Auckland, Ardern said.

Covid-19 modeller Shaun Hendy told TVNZ's Breakfast show that we had another "couple of weeks" of community case numbers rising.

"It is quite concerning," he said.

If the case numbers got up to 200 to 300 cases a day, that would put a lot of strain on the health system in Auckland.

On any potential drop down the alert levels, Hendy said that should not happen - and even said that a level 4 circuit breaker at this stage could really bring the number of unlinked community cases down.

"I don't think we can relax ... until we start to see those numbers drop."

On the FDA approving Pfizer for 5-11 year olds, Bloomfield said he was expected an application from Pfizer in the next two weeks or so and that was when New Zealand could consider it properly. They could not put up a provisional approval for it until they got that application.

Bloomfield said the FDA had taken longer over the approval for children than the initial assessment for Pfizer. He said Medsafe were standing by ready to go, but would go through a thorough process and would not skimp on it.

Bloomfield said the challenge for Pfizer would be in supply enough to meet demands. "We are in the room having those discussions, and other countries are in the same situation."

Ardern said there was initially talk that it would simply be a paediatric dose of the adult vaccine, but that now seemed to have changed and there were "nuances" to it.

On the Jet Park escapees, and the 24 hour time lag before it was made public, Ardern said the main focus was on finding those people again. She did not want to comment on why it was decided to wait before revealing the escapes.

"We know we needed to locate those individuals, regardless of when the public were informed."