There are 134 new cases of Covid-19 in the community today and 89 people in hospital with the virus.

There are 116 new cases in Auckland, eight in Waikato, nine in the By of Plenty and two in Nelson-Tasman.

The two cases in the Nelson-Tasman region are both known contacts of the local case announced yesterday.

Of the Waikato cases, four are in Te Kuiti, one in Huntly, one in Hamilton, one in Ngaruawahia and one in Te Awamutu.

Of the Bay of Plenty cases, one is in Whakatane, three in Tauranga and five in the wider Western Bay of Plenty area. All are close contacts of previously reported cases.

The new Northland case is in Kaitaia. Public health interviews are underway to establish the link.

There are 89 people in hospital today, down four on yesterday. Today's figure includes nine patients in ICU or high-dependency units.

Only 19 per cent of those being treated in hospital were fully vaccinated.

So far 86 per cent of eligible people in New Zealand are fully vaccinated and 92 per cent have had their first dose.

The numbers come as Prime Minister Jacinda Ardern is in Hamilton supporting vaccination efforts and meeting with the business community.

A rowdy band of protesters have been following her and are attempting to disrupt her visit by yelling and chanting insults at her.

The move to the Covid Protection Framework, also known as the traffic light system, on Friday comes amid fresh concern globally about a new variant of the coronavirus spreading around the world and uncertainty around what its impact could be.

The latest variant to emerge - Omicron - is thought to be highly infectious and has already made its way to Australia with two people testing positive for it after travelling from South Africa.

Meanwhile case numbers in New Zealand continue to hover around about 200 a day and yesterday there were 182 Covid-19 cases with the majority, 167, in Auckland.

There were also five new cases Northland and 10 in Waikato. A case in the Nelson-Marlborough region announced yesterday will form part of today's tally.

The number in hospital has increased to 93 people, including 10 in ICU or HDU. There were 17 patients being treated in North Shore, 33 in Middlemore, 37 in Auckland, four in Waikato and one in Rotorua.

There were also three new cases at the border.

From Friday Auckland will move out of lockdown after more than three months and into the red traffic light due to being the epicentre of the virus.

The new framework is based around high vaccination rates enabling living with Covid-19 in the community, with three levels of restrictions based on the risk posed - green, orange and red. It also relies on the use of vaccination passports at more high risk settings.

Northland, Auckland, Taupō and Rotorua Lakes Districts, Kawerau, Whakatāne, Ōpōtiki Districts, Gisborne District, Wairoa District, Rangitikei, Whanganui and Ruapehu Districts are also moving to the red traffic light due to low vaccination rates and because large numbers of visitors - including Aucklanders - are expected in these areas over summer.

Some of these areas moving into the red traffic light system on Friday have not even recorded any cases of Covid-19 in the recent outbreak. 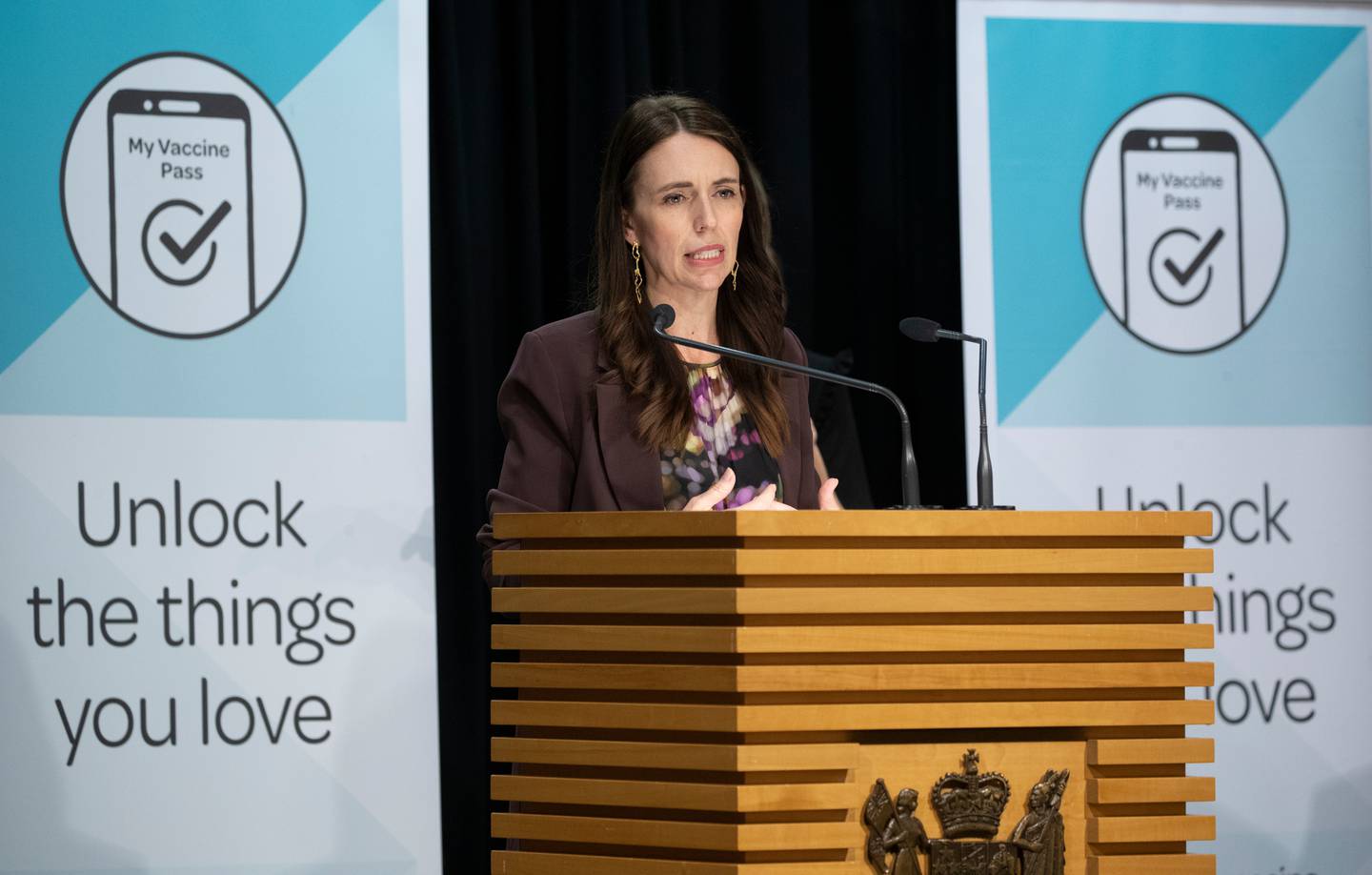 Prime Minister Jacinda Ardern announces which areas will move to a red light under the new Covid Protection Framework being introduced on Friday. Photo / Mark Mitchell