There are 12 Covid cases in the community today.

All of the cases are in Auckland and two of today's have yet to be linked to existing cases, the Ministry of Health says.

Thirteen people with Covid-19 are in hospital - four in ICU or a high-dependency unit.

Officials said one of today's community cases had previously been under investigation and was now confirmed, and was linked to the current outbreak.

The case has now recovered. The person spent 14 days in a quarantine facility along with household members who also tested positive for Covid-19.

Over the weekend, the vaccination campaign reached a new milestone with 5 million doses administered. An additional 24,710 jabs were administered yesterday.

A total of 82 per cent of Aucklanders have now had their first dose.

"In some cases, public health staff have been sending mobile testing units to areas where there have previously been cases and encouraging residents to get tested at their home," officials said.

"If you do receive a knock at your door, we'd strongly encourage you to take up the opportunity to get tested and if haven't already been vaccinated, to do so with one of the registered vaccinators on board the mobile unit."

For these suburbs, there were 705 tests processed yesterday. This number included asymptomatic and symptomatic tests.

Health officials asked people to get tested: "If you are a contact, have visited a location of interest at the specific dates and times, are connected to a suburb of interest or have any symptoms of Covid-19 – even those with very mild symptoms need to get tested and isolate at home while waiting for test results".

It has also emerged today that two Auckland police hubs have had to shut down after exposure to an arrested woman who tested positive for Covid.

The woman was arrested after being interviewed at the North Shore Policing Centre last week before being transferred to the cells at the Henderson station has tested positive for Covid-19 - leading to parts of both sites being shut down.

Now all people arrested in the Waitemata District - which covers Waitakere and the North Shore - are being transported to Auckland City for processing.

Today is Auckland's 40th day in lockdown and the city has just enjoyed its first weekend of reduced restrictions in level 3 in five weeks.

But despite warnings and messages from Government and health officials to remember lockdown rules, it seems the weekend's sunny skies and warmer temperatures were too much temptation - with Mission Bay beach buzzing with activity.

Many people appeared to flout the rules; heading out on the water and beach and at times forgetting all about social distancing.

A total of 18 new Covid cases in the community were identified yesterday afternoon - all of which are in Auckland.

One somewhat worrying aspect of the Ministry of Health's latest update was that eight of the 16 positive cases announced the day before had become infectious in the community.

The other half from that day's cases were people who are already in isolation.

Of yesterday's 18 community cases, 16 people were found to be epidemiologically linked. The other two were still subject to investigations to figure out exactly how they are connected to the current outbreak.

The ministry said of the 15 epidemiologically linked Covid sub-clusters, four are still active. Nine are now contained and two are now dormant.

"There are 10 epidemiologically unlinked subclusters. Of these, three are contained and seven are dormant," the update said.

Twelve people are fighting the virus in hospitals around the city - one person at North Shore Hospital, five at Middlemore Hospital, in South Auckland, and six at Auckland City Hospital in the central city.

Of those patients, four are in an intensive care unit or high dependency unit.

Prime Minister Jacinda Ardern this morning reiterated the Government's plan and ideas about how the border will reopen come next year.

She told TVNZ's Breakfast programme that the beginning of 2022 would see some variation.

Ardern pinpointed to plans released by the Government earlier in the year about a phased approach to re-opening New Zealand's border. Managed isolation and quarantine options and ideas were also being looked at.

She acknowledged that the country would continue to fight the deadly virus hard - and again pointed to the need for a high rate of vaccinations among the Kiwi population in order for the country to live normally again. 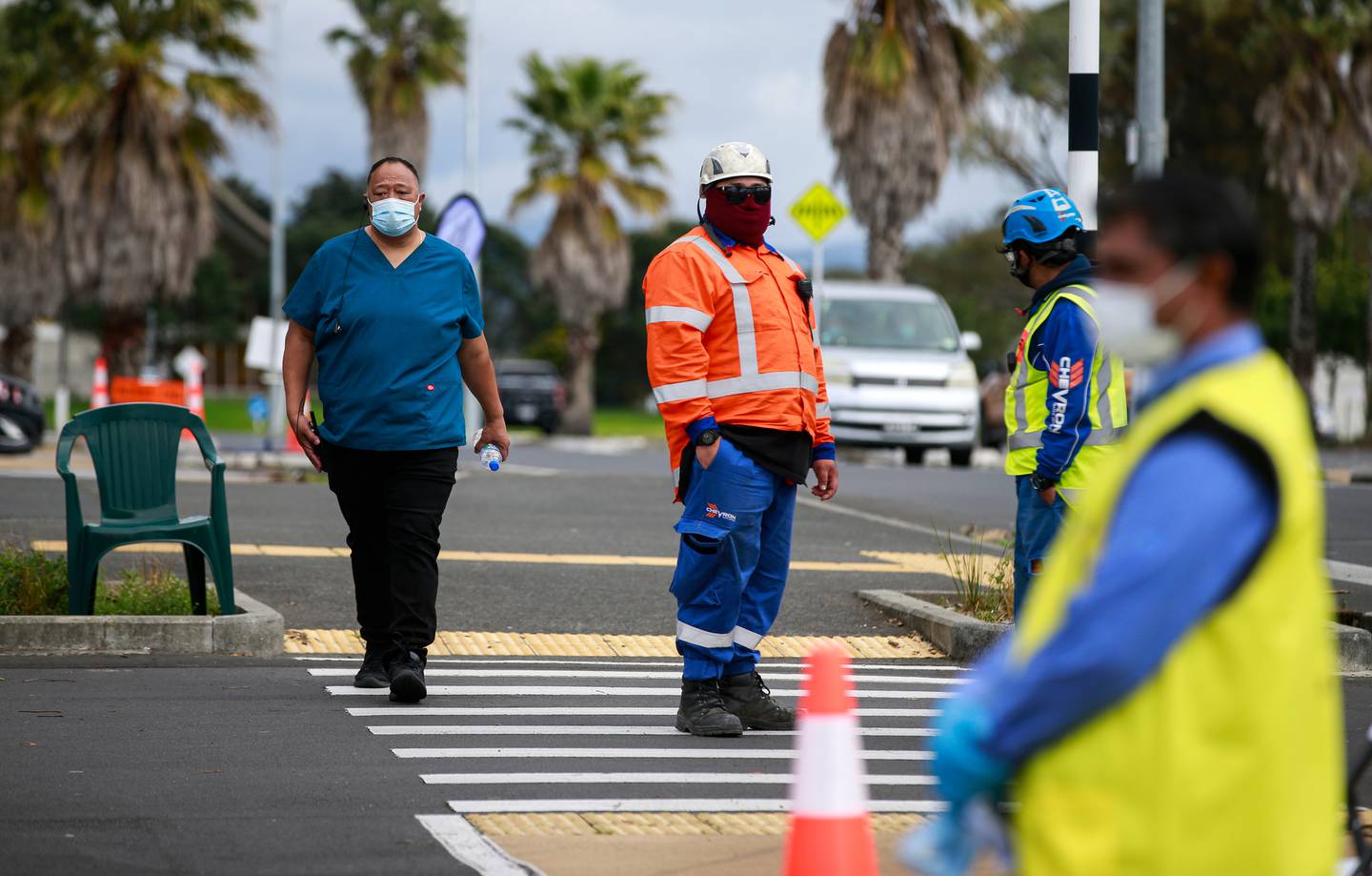 Workers at a vaccination centre at the Māngere Town Centre in South Auckland. Photo / Alex Burton

The locations show a number of places have been visited by people with Covid as late as the end of the last week on Thursday and Friday.

Countdown Māngere Mall, at the Māngere Town Centre, has been linked to a person with the virus who was shopping there on Friday, September 24, between 11.58am and 12.18pm.

The second place exposed to Covid that same day is the Chemist Warehouse at the Westfield Manukau City Shopping Centre on Putney Way.

The affected person was there for half an hour between 1.13pm and 1.43pm. Anyone who was at the chemist is advised to stay home and to get tested immediately.

Six locations of interest released over the last few days show people with the virus were out at various places on Thursday (September 23).

The Mr Meats butcher shop on Roscommon Rd, Clendon Park, had a person with the virus there on that day between 4.01pm and 4.16pm.

A positive case was also at the Pacific Fresh shop, also on Roscommon Rd from 3.51pm to 4.01pm.

Shortly before that, between 3.23pm and 3.43pm, an infected member of the public was at the Countdown supermarket at the Westfield Manukau City shopping centre.

Unichem Otara was also visited by a person who has tested positive for Covid on the same day - between 2.58pm and 3.08pm.

Chemist Warehouse at the Westfield Manukau City mall is linked to a positive case there between 3.12pm and 3.22pm.

While the final exposure event that day has been found at the BP Connect petrol station at 199 Weymouth Rd, Manurewa. The affected time is between 10.29am and 10.39am.

The Ministry of Health is advising anyone who was at four of those places - Mr Meats, Pacific Fresh, Countdown Manukau City and the Unichem Otara - to stay at home and "test immediately" as well as five days after you were exposed to that location of interest.

"Please continue to stay at home until you receive a negative day five test result."

People who were at any of those locations at the affected time periods are also urged to record their visits online, on the ministry's website, or call Healthline on 0800 611 116 so contact-tracers can get in touch.