A defiant Brian Tamaki has taken to the stage at an anti-lockdown, pro-freedom rally in Auckland Domain today - risking the ire of the courts who had earlier warned him to stay away from such protests.

The Destiny Church founder and his wife Hannah Tamaki took to the stage at the rally which started at 11am and finished just after 1pm. Up to 2000 people were at the rally.

"I'm standing on the right to the protest," said Brian Tamaki.

He referred to New Zealand as "Jacindaland" before denouncing Covid restrictions and vaccine mandates.

Tamaki said: "I am not a citizen of Jacinda's New Zealand. I refuse to be a part of the New Zealand she is creating."

Tamaki has already appeared in court twice since early October. The first appearance was on charges for organising a rally on October 2, allegedly in breach of Covid restrictions - he has pleaded not guilty.

He was ordered to stay away from future protests but was in court again on October 20 for fronting up at the second Domain protest on October 16, allegedly breaching bail.

He was allowed to remain free on bail on several conditions. One condition was that he not "organise or attend any protests in breach of any Covid-19 level requirement", while another was that he not "use the internet for the purpose of organising, attending or encouraging non-compliance with the Covid-19 Public Health Response Act 2020".

Tamaki and lawyer Ron Mansfield QC agreed to the conditions at the time.

Tamaki, who left the protest shortly after speaking, told the crowd today that everyone had a right to challenge those who we voted in.

He said he did not hate Prime Minister Jacinda Ardern. He said if there were to be a meeting between the pair he would greet her and hug her.

Calling himself a normal guy, Tamaki appealed for people to quit attacking him on Facebook. He claimed he was not rolling in cash but "just making it".

He was also facing having to close his church down.

On protesting, he said everyone had a right to challenge those who we voted in.

He said the whole political system needed reform. "We keep getting effed over."

Describing himself as a media lightning rod, Tamaki said it was necessary to have a very loud voice to address some very serious problems in New Zealand.

"I would rather live in dangerous freedom than live in peaceful slavery," Tamaki told the crowd as he wound up his address.

Those at the Domain started the rally by singing the national anthem and paying tribute to those killed in a car crash as they returned home from an earlier protest in Wellington.

Today's protest is the fourth at the Domain since the beginning of October - and was one of several across New Zealand today, including one in Civic Square, Wellington.

The Freedoms & Rights Coalition gathered at the Domain at 11am today and the Auckland War Memorial Museum has closed its doors as a precaution.

While the crowd swelled to more than 1000. it was still not at the scale of the Domain gathering and march through Newmarket on October 30.

A small cavalcade of motorbikes arrived at the scene just after 11am.

Today's protest in Auckland is happening at the same time as gatherings in Wellington, Gisborne, Whangarei, Rotorua, and Hawke's Bay. 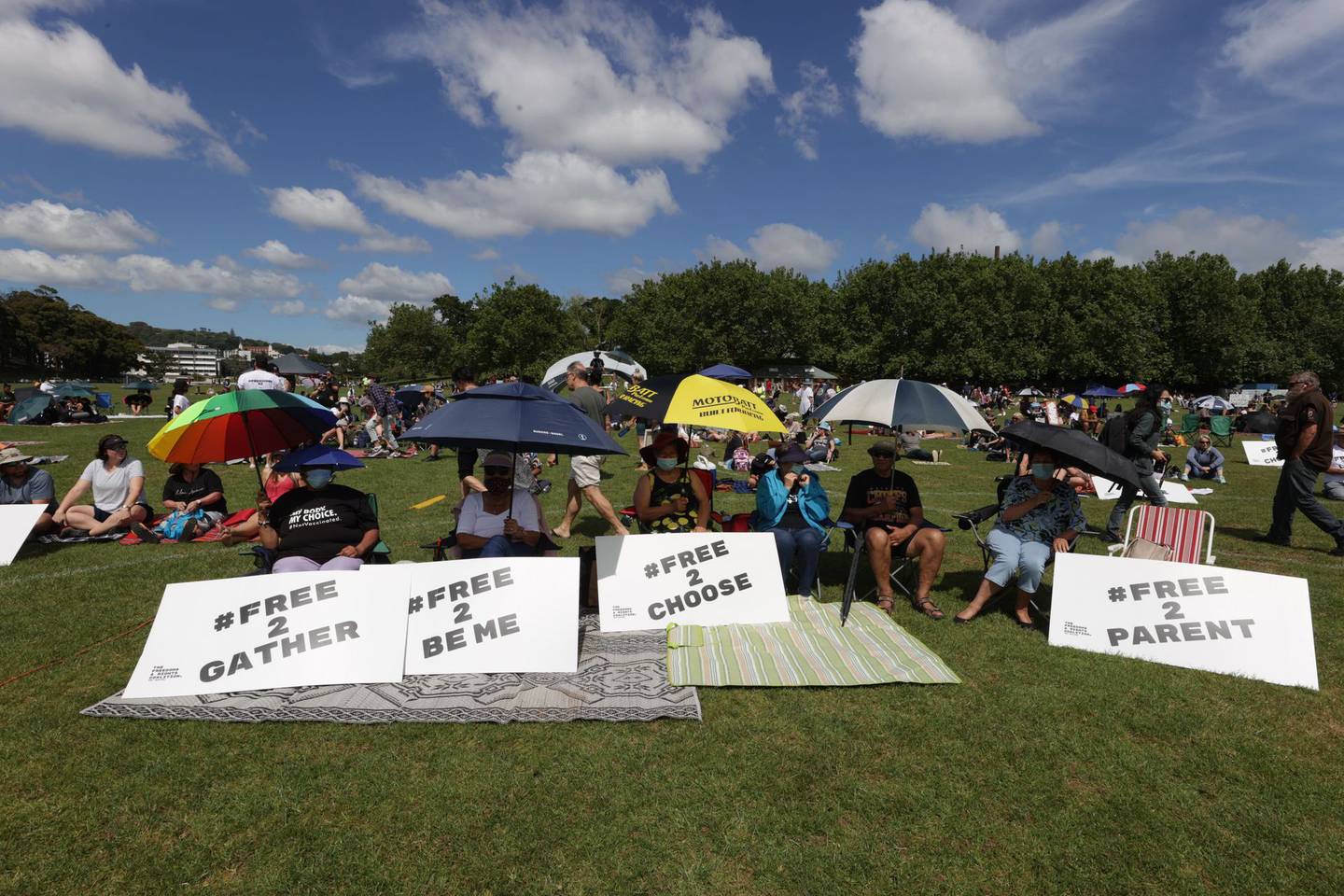 Police have warned the protest action will cause some disruption to traffic this weekend. Locations that protesters are expected to gather, including Auckland's Domain, will be monitored by police.

Tributes were paid at this morning's rally to those who were killed in a fatal car crash near Levin last week as they returned to New Plymouth from a protest in Wellington on November 9.

"Today we honour the fallen heroes," said the MC as the crowd observed a minute's silence.

He said 50-year-old Devon Intermediate teacher Cass Jordan was due to move home to Nelson due to losing her job because of refusing to get vaccinated.

"Today she was going home to her family. On Thursday, Cass was buried with her family." 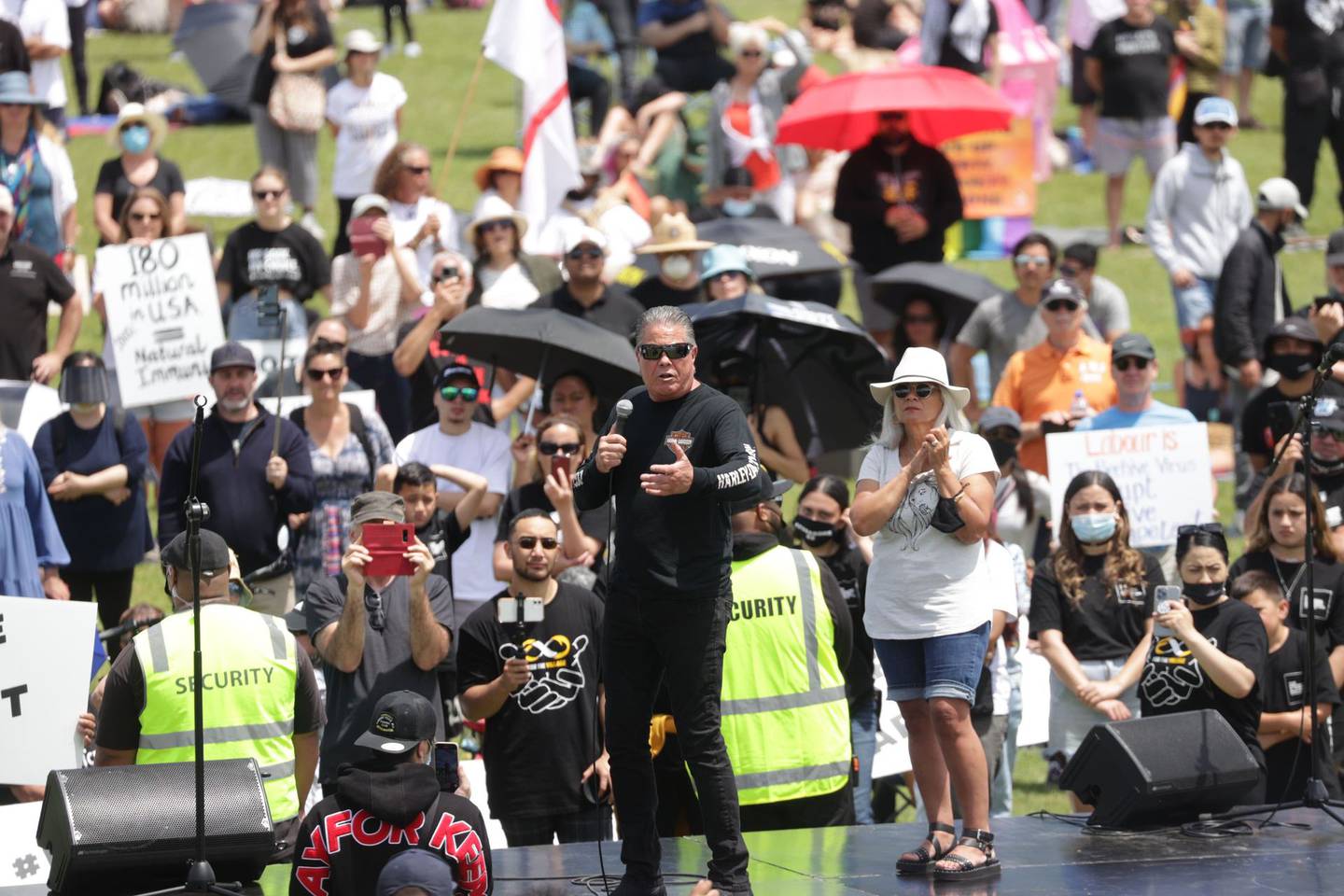 A South Auckland teacher of 17 years' experience who has refused the vaccine spoke to the crowd. She described leaving her job at Papakura High and driving out the school gates for the last time as the deadline for teachers to get their first vaccine arrived this week.

Those in the crowd who had lost their jobs due to vaccine mandates, or knew people that had, were asked to stand.

Musician Shane McLean, a composer for film and television, played the flute for those gathered. He had lost his job as a Māori mental health worker this week for refusing the vaccine.

Nathan King, also known as Sesh, performed an anti-mandate rap to the family crowd. While some profanities had been bleeped out on the accompanying soundtrack, not all were. 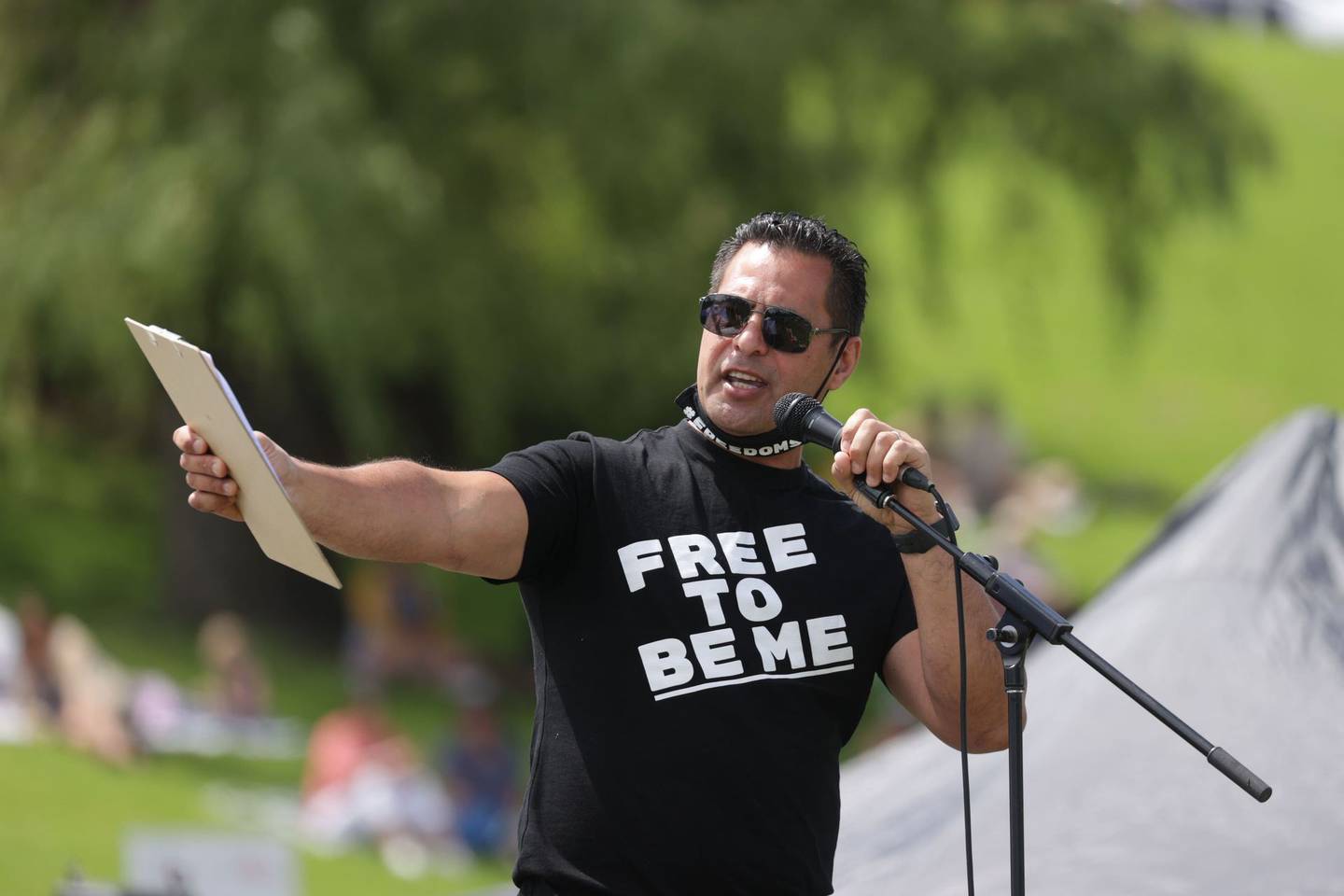 The MC of the protest is listing off over the loudspeaker people who have lost their job due to refusing the vaccine. November 20, 2021.

A police statement this morning said: "Police recognise that individuals have a lawful right to protest. However, this should not be at the expense of restrictions that are designed to keep our community safe."

Police are also reminding those who plan on attending the protests to "conduct themselves in a calm manner and adhere to Covid-19 level 3 restrictions."

Police say any breaches of the health order or other illegal behaviour may be followed up with enforcement action.

The anti-lockdown and anti-vaccine mandate protesters have previously met in Auckland Domain on October 2, 16 and 30.

The organisation of the protests is aligned with Destiny Church and their leader Brian Tamaki and others have appeared in court over breaching the Public Health Act.

Tamaki did not attend the October 30 protest due to his bail conditions - however his wife Hannah did while live-streaming the event.

A heavy police presence has been in attendance watching over each Domain protest, with some officers taking photographs.

A member of Destiny Church, Paul Thompson, was in attendance at the protests and has since tested positive for Covid-19. Traffic was delayed on Auckland highways for a few hours as a result.

Auckland War Memorial Museum chief executive Dr David Gaimster said in a statement they would again be closing today as the protesters gathered directly outside their doors on the Auckland Domain grounds.

"In the current Government alert setting, large gatherings are a breach of the Government guidelines," Gaimster said. 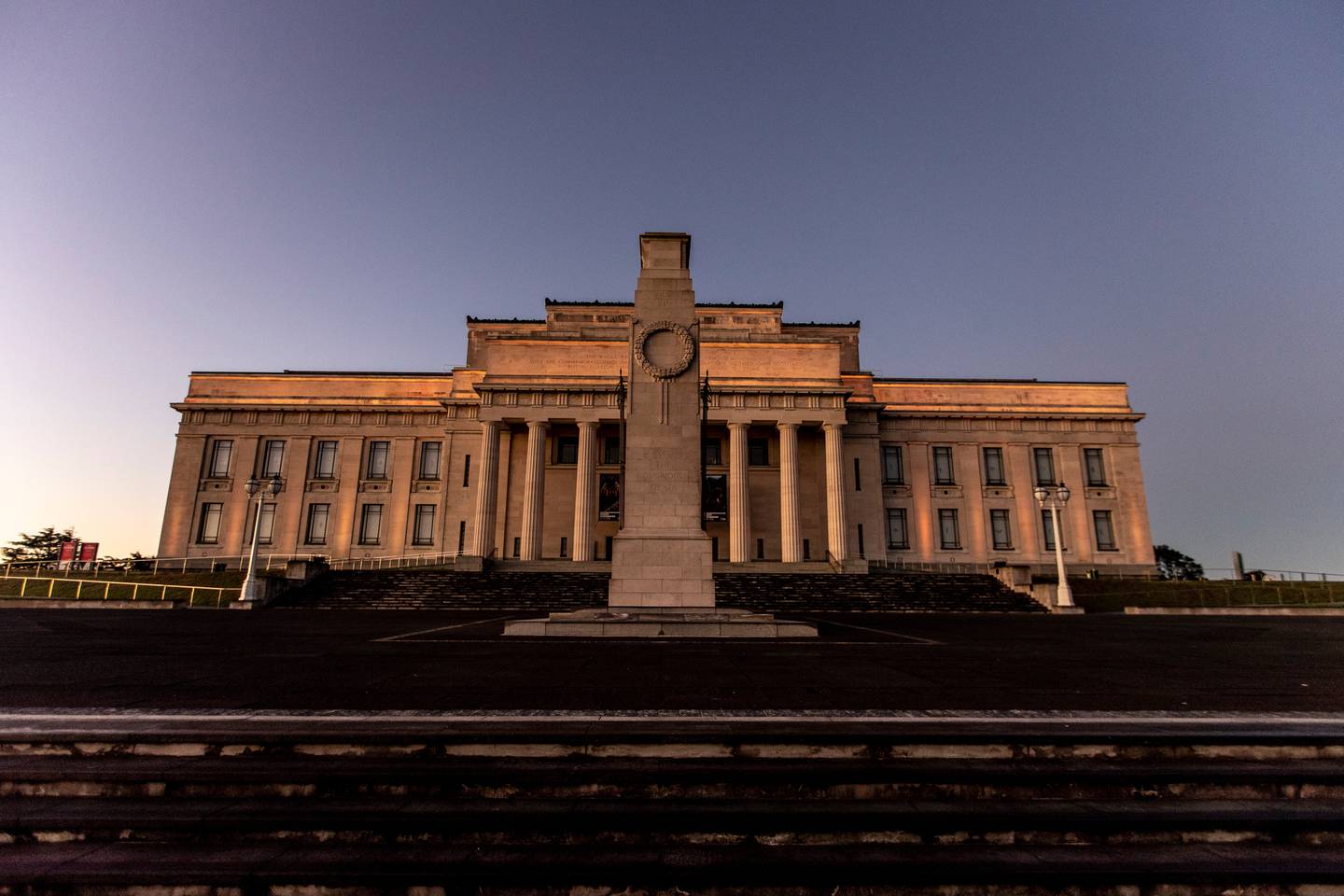 The Auckland Museum statement said that large numbers of people, often without face masks, and not adhering to social distancing was part of the reason for the closure.

"Our priority throughout the Covid-19 pandemic has been to protect our people and the community we serve in line with Government and Ministry of Health advice," Gaimster said.

"We apologise to those Aucklanders who may have planned a visit to Auckland Museum on Saturday. Like you, we are disappointed we will not be able to welcome you onsite that day." 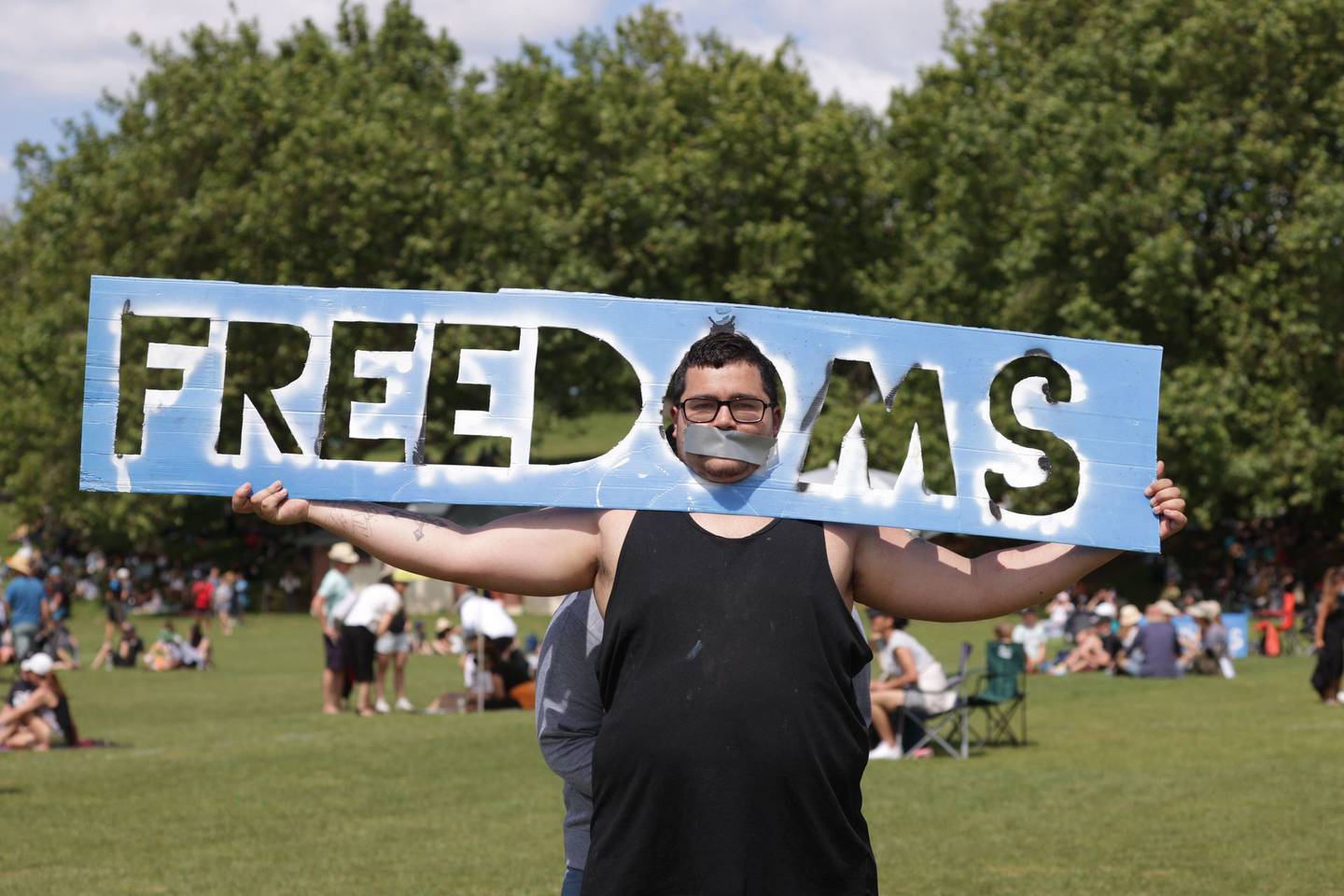 A protester covers his mouth with duct tape. November 20, 2021

"At present, it is our intention to reopen to our public on Sunday 21 November, although we remain vigilant to the changing environment and are in communication with the Police should a further protest be planned for Sunday.

"If you are considering a visit to Auckland Museum on Sunday, we advise you to check our website before making the journey to avoid disappointment."

On their Facebook page, the Freedoms & Rights Coalition describe today's protests as specifically for those who have lost their jobs during Auckland's ongoing lockdown for the past three months and the Government's vaccine mandates for certain industries.