Prime Minister Jacinda Ardern and Governor General Dame Cindy Kiro are both now isolating after a flight attendant on their flight from Kerikeri to Auckland tested positive for Omicron.

All those on the flight, which include Ardern's chief press secretary Andrew Campbell, are considered close contacts.

A spokesperson for the PM said Ardern took a PCR test this morning as per Ministry of Health requirements.

"She remains asymptotic and continues to feel well."

Test results are expected to be received later today/tomorrow.

Ardern and Kiro were returning from Waitangi last Saturday after filming pre-recorded speeches for Waitangi Day.

That flight has been deemed as "high risk" on the Ministry of Health's updated locations of interest list.

A statement released by the Prime Minister's office shortly after 10pm on Saturday said: "Whole genome sequencing for the case has been requested with an expected result on Sunday.

"The result is expected to indicate that the case has been infected with the Omicron variant and the public health response reflects this.

"All other passengers on board NZ8273 are also deemed close contacts and are required to self-isolate, get tested immediately and remain in isolation for 10 days following their exposure."

They will also need to follow further isolation and testing requirements provided by public health officials.

"The Prime Minister is asymptomatic and is feeling well. In line with Ministry of Health advice she will be tested immediately [on Sunday] and will isolate until Tuesday," the statement issued last night said.

"The Governor-General and members of her staff were also on board and are following the same isolation instructions.

"The Prime Minister and Governor-General were in Northland undertaking advance filming at the Waitangi Treaty Grounds, at the invitation of the Waitangi National Trust for the Waitangi Day broadcast."

On Sunday January 23 she announced all of New Zealand would move to the red traffic light setting.

On Thursday the PM also visited a vaccination centre in Lower Hutt alongside Covid Response Minister Chris Hipkins and other MPs.

Act Party leader David Seymour said the fact it had taken seven days to identify close contacts showed contact tracing was a "costly charade" that had little effect on spread.

"Once again the Government has been caught taking a nap as it takes seven long days to identify close contacts of Omicron," Seymour said.

"This experience should be a turning point for Jacinda's approach to Covid. She might ask herself 'Why am I isolating when contact tracing is too slow for it to be effective, maybe we should stop forcing otherwise healthy people to isolate if it makes no difference? How many other people am I willing to put through this?"

It is not yet clear when the original case tested positive for Covid.

As the PM and Governor-General isolate, New Zealanders have been told they should expect Covid-19 cases to roughly double every three days from now on and to assume all new infections are Omicron.

Yesterday, there were 97 new Covid cases in the community - 11 of which had been confirmed as the Omicron variant.

However, University of Auckland Covid-19 modeller and expert in the spread of complex networks, Dr Dion O'Neale, said at this stage of the Omicron outbreak we should assume all new cases are of that more infectious variant.

"Even if we expected Delta numbers to be growing a little bit as people came back from holiday, it was only a few days ago that we had enough Omicron cases to be comparable to Delta.

"We'd expect from that point Omicron to growing much faster, if for no other reason than the current vaccine levels are giving you much more protection against Delta than they are against Omicron."

Active cases being treated as Omicron have now been detected in Auckland, Waikato, Bay of Plenty, Taranaki, MidCentral, Canterbury, Tairāwhiti/Gisborne and Nelson-Tasman.

To date, 116 community cases of Covid-19 have either been confirmed by whole genome sequencing as the Omicron variant or have been linked to a previously reported Omicron case. The hold-up in new cases being identified as Omicron immediately in the Ministry of Health's daily 1pm update is because whole genome sequencing is a "bottleneck" that takes longer than the PCR test that determines a Covid-19 positive sample.

O'Neil said based off the spread of Omicron in other countries, New Zealand should see a rapid doubling of the numbers over the coming week to reach 500-odd next weekend.

"Most countries and states around the world have seen a doubling time of around three days once you see an Omicron outbreak take off," he said.

"So, if we save it at 100-odd cases today and if there's a good chance that the majority of them are Omicron, in a week's time it's about two doubling times. So that's 200 halfway through the week and 400 per day maybe by the end of the week.

"It wouldn't be surprising to see 500 cases by next weekend. If that doubling time of three days, then half a week later you hit 1000 and so on, just as a super rough indication."

University of Otago expert in infectious diseases, Professor David Murdoch, echoed Kiwis should not be reassured by the stagnancy of Omicron numbers the past few days, and says the outbreak is tracking as expected.

"We're seeing a progressive outbreak and I don't think it mitigates any concern. We're just expecting the numbers to increase quite dramatically. There's every indication that's going to happen," Murdoch said.

"It's nice to see we haven't seen the explosion in detected cases but we need to be aware that may still come." Mask-wearing on Queen St, Auckland CBD, as the Government announces a move back to red in the traffic light system due to the outbreak if the Omicron variant. Photo / Alex Burton

Murdoch said although "it's good" only seven people are hospitalised with Covid-19 and none are in ICU, the sheer rate of Omicron spread will still cause trouble for the health system.

"Fortunately, we are seeing lots of evidence coming through that the proportion of those infected with severe disease [from Omicron] is relatively low, and a lot of them are asymptomatic," Murdoch said.

"That data is coming out all the time. The concern of course is even if the proportion of severe disease is low, if there are just so many numbers, the number [with severe disease] will still be high if there's suddenly a massive outbreak. It's just simple maths."

Yesterday the Ministry of Health also updated the number of cases connected to the Soundsplash music festival in Hamilton last weekend to 39 - with an expectation that number will grow.

All attendees at the festival are being advised to get a Covid-19 test.

Eight new community cases in the Bay of Plenty included three cases on the Singapore-flagged Maersk Bogor container ship now under quarantine at the Port of Tauranga. The ship is due to leave port tomorrow. 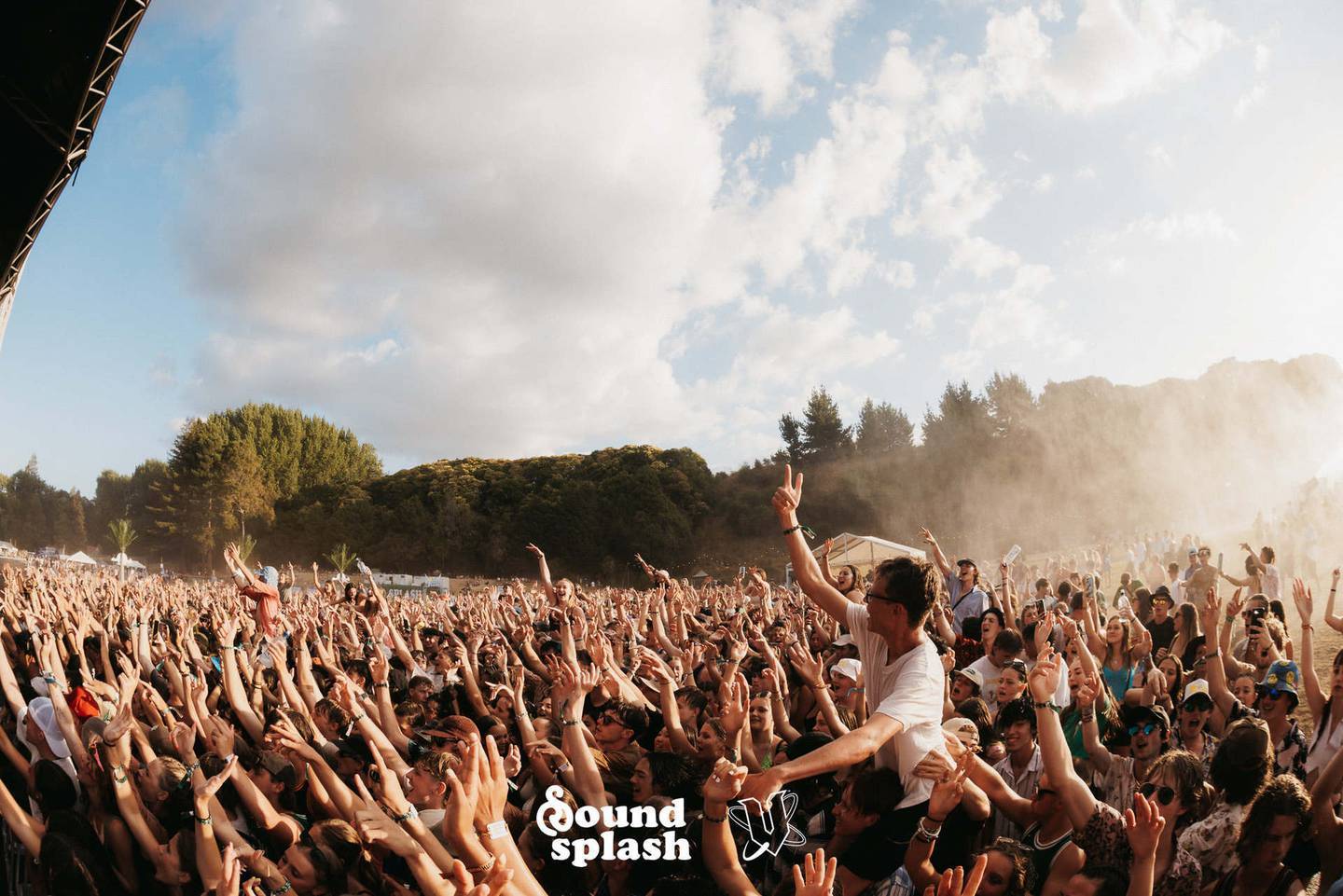 Festivalgoers at the Mystery Creek event which experts fear may turn into an Omicron super-spreader. Photo / Supplied

And 58 new Covid-19 cases were identified at the border yesterday.

O'Neil and Murdoch agreed New Zealand's booster rate at 26.8 per cent of the population over 5 years old may help us escape an Omicron outbreak as severe as Victoria or New South Wales.

"We do have the chance that we can, if we can accelerate that booster uptake next couple of weeks - this week would be really great - then will help keep numbers lower," O'Neil said.

"The evidence would suggest that [booster rate] would help in terms of mitigating the effects of Omicron, but it's just so difficult to compare one place to another."