A package containing what is suspected to be a bomb and ammunition has been found at a vacant section in Christchurch this afternoon.

"Police have located a package containing a suspected explosive device and ammunition at a vacant address on Newcastle Street in Christchurch," he said.

The police bomb disposal van arrived at the scene on Newcastle St in Phillipstown, Christchurch, and a 33-year-old man has been arrested.

Police, Defence Force, Fire and Emergency and St John swarmed the area around after a report of suspicious items at a property.

Residents were earlier evacuated from Newcastle, Glasgow and Harrow streets as a precaution but were now being allowed to return home, police said.

Specialist officers have been seen carrying cases of equipment closer to the property under police scrutiny.

Several more police officers are waiting a further block away in reserve.

Police had cleared the empty section on Newcastle St.

They were focussing on a small pile of items in the rear of the cleared lot.

Some residents had been allowed back home while officers went door-to-door canvassing residents. 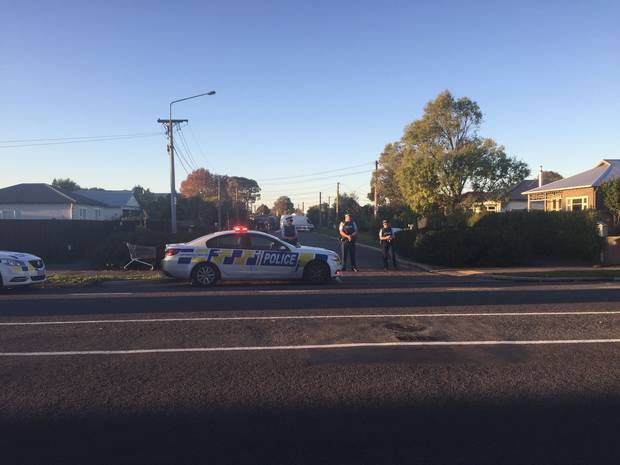 Police at the cordon on Glasgow St in Phillipstown, Christchurch. Photo / Jack Loader

One local said he was told to evacuate mid-afternoon.

Police officers didn't tell him what was going on and he only realised something was happening when officers were outside his house.

One resident on nearby Harrow St saying there was a "big" police presence.

The woman walked down the road to try and ask a police officer what was going on and he told her it wasn't a drill but couldn't say what it was.

"There's an empty section which is full of police cars and police, lots of them," she said.

"A fire engine was parked opposite but that's all I know - there's something going on."

A Christchurch woman who recently drove past the scene said she counted 23 police cars in the area and said it was "very strange" to have so many in one area.

A St John spokesman said Police were the lead agency and it had an ambulance on standby in case it was needed.

Fire and Emergency NZ also had one appliance at the scene.