Lianne Dalziel, John Minto and Darryll Park with face each other in a "Lianne vs Minto vs Park" special which will be hosted by Newstalk ZB's Christchurch Morning host Chris Lynch.

"With Dalziel seeking a third term and playing the stability card, Minto seeking redemption after being trounced by Dalziel in the 2016 elections and newcomer Park trying to make a name for himself, this promises to be a 'no holds barred' kind of event," Lynch said. 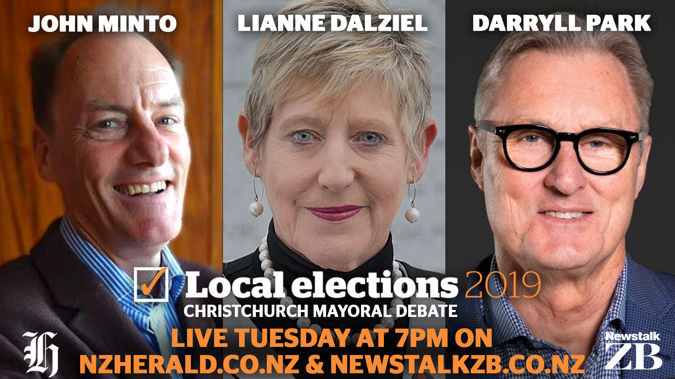 Polling has shown the three mayoral hopefuls leading the 13-strong field of contenders.

Lynch, who will moderate the debate, said the event would test the candidates against on range of issues.

"I hear from callers every day about the good, the bad and the ugly in Christchurch," Lynch said.

"They're issues that are often very specific to the city. I promise none of the candidates will be let off the hook."

Audiences are being asked to take part in the hour-long event by emailing questions to [email protected] or by commenting on the Herald's Facebook post about the event.

"Like our Goff vs Tamihere event in Auckland, this is a great opportunity for voters to see how convincingly their candidates articulate campaign promises and perform under fire," said Jason Winstanley, NZME Head of Talk.

"Judging from the Auckland debate, and given this time there's a trio in the studio, we should see plenty of colourful action."

The debate will be livestreamed at nzherald.co.nz and newstalkzb.co.nz, and also broadcast live on Newstalk ZB Christchurch 100.1FM and iHeartRadio.

Reactions and analysis to the debate will be available on Wednesday morning on Newstalk ZB's Canterbury Mornings with Mike Yardley.

A Wellington NZ Herald and Newstalk ZB mayoral debate, hosted by Heather du Plessis-Allan will be held on September 26.