He trained some of the country's best boxers, but it was Covid-19 which eventually took out one of the legends of the sport, Bernard Pope.

The 78-year-old was a resident at Rosewood Rest Home and Hospital where he was infected with coronavirus.

He was transferred to Christchurch's Burwood Hospital where he died on Friday.

Rosewood has one of the 15 nationwide Covid-19 clusters attached to it; six of its residents have died, while there are also 35 confirmed or probable Covid-19 cases. About 18 of those 18 were staff members.

Fellow boxing coach Phil Shatford, 63, said it was Pope who taught him everything he knew on the path to the national coaching stage and eventually a Queens Service Medal for his services to boxing.

Every Christmas Day we would go down to the cemetery together ... putting flowers on people's graves and when we're down there we'd talk about death but I didn't think he would end up being the victim of a virus, that's for sure."

He had his first boxing match under Pope's wing aged 13.

The last time he saw Pope was just prior to the nationwide lockdown.

"Bernie has been in a few homes. Rosewood was the last one he was in obviously. I would go and see Bernie heaps of times. I only went to Rosewood about three times because, oh, it was so sad seeing the guy in that sort of state." 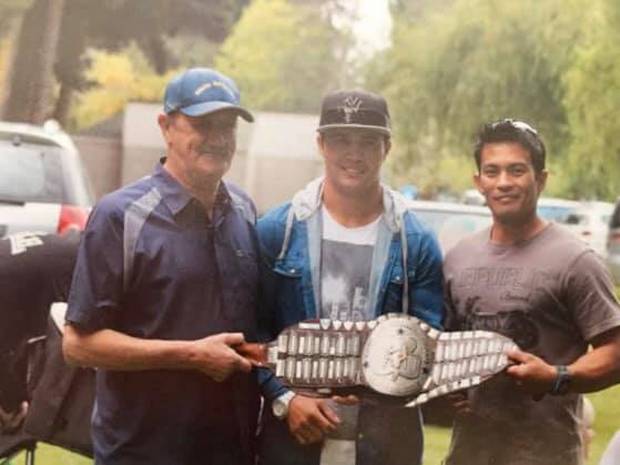 After years as a boxing coach, Pope was the glove steward and life member of the Canterbury Boxing Association.

"The boxing fraternity will miss him pretty bad."

As for knowing how Pope died, Shatford said he was informed by family who he was close to.

"He trained a number of New Zealand senior champions. He was a terrific bloke to me, a best friend and the father I never really had."

With his mate dying during the lockdown it meant he wasn't able to say a proper goodbye.

"You can't even have a get-together with the boys and celebrate his life. That is probably the hardest thing I've had to go through.

"A lot of people ring you up, a lot of people text you but at the end of the day there doesn't seem to be any proper ending to it."

He didn't begrudge anyone for Pope getting infected with the virus, and said he was "seriously ill" beforehand.

As for the virus spreading through the rest home, Shatford wasn't impressed.

A Canterbury DHB spokesman confirmed that in the "demanding context of managing a cluster of frail elderly residents, a significant number of staff needed to be isolated because of exposure to Covid-19 and this contributed to a number of issues regarding safe practice, including the way PPE [personal protective equipment] was used".

Director-General of Health Dr Ashley Bloomfield said yesterday there might be more deaths linked to the Rosewood outbreak, because of residents' underlying health conditions.

Pope's brother Peter declined to comment when approached by the Herald today.