A rowdy urban rooster, ruffling feathers with its daytime crowing, has been told to pull its neck in.

Babs has fallen foul of his residential neighbours - and earned a visit from council inspectors who have warned his owner that "crowing roosters are considered a noise nuisance".

Olivia Cook, a 24-year-old part-time dispatcher who fosters all sorts of animals, rescued Babs and his sister Ginger – named from the animated movie Chicken Run - from across the other side of Christchurch last year as tiny chicks.

Just a few centimetres tall, she took them back to her North Beach home and tried to keep them warm and fed.

They lived in her bed, snuggling on body heat.

An enclosure was also in the bedroom but the baby roosters preferred to cosy into Cook.

Often she'd wake with them sprawled across her face, on top of her head, or nestled in the crook of her neck.

Albie, a hulking ginger rescue cat, also looked over them, and could be left alone with the chicks with no fears they would be eaten.

But after about three months, they were big enough to move outside.

Cook says they hated the transition and would run inside, back to her bedroom, at every given opportunity.

Slowly, they got used to it. Their wings are not clipped but they stay close. They have never tried to escape.

They enjoy a large run down the side of the house, shared with two other rescue chooks - Audrey and former battery hen Chickalita, who rules the roost - eating chick feed (wheat, pellet and mash) and fruit and vegetable scraps.

Some time after 7am, when Cook lets Babs out of the hen house, he crows to announce the dawning of a new day. 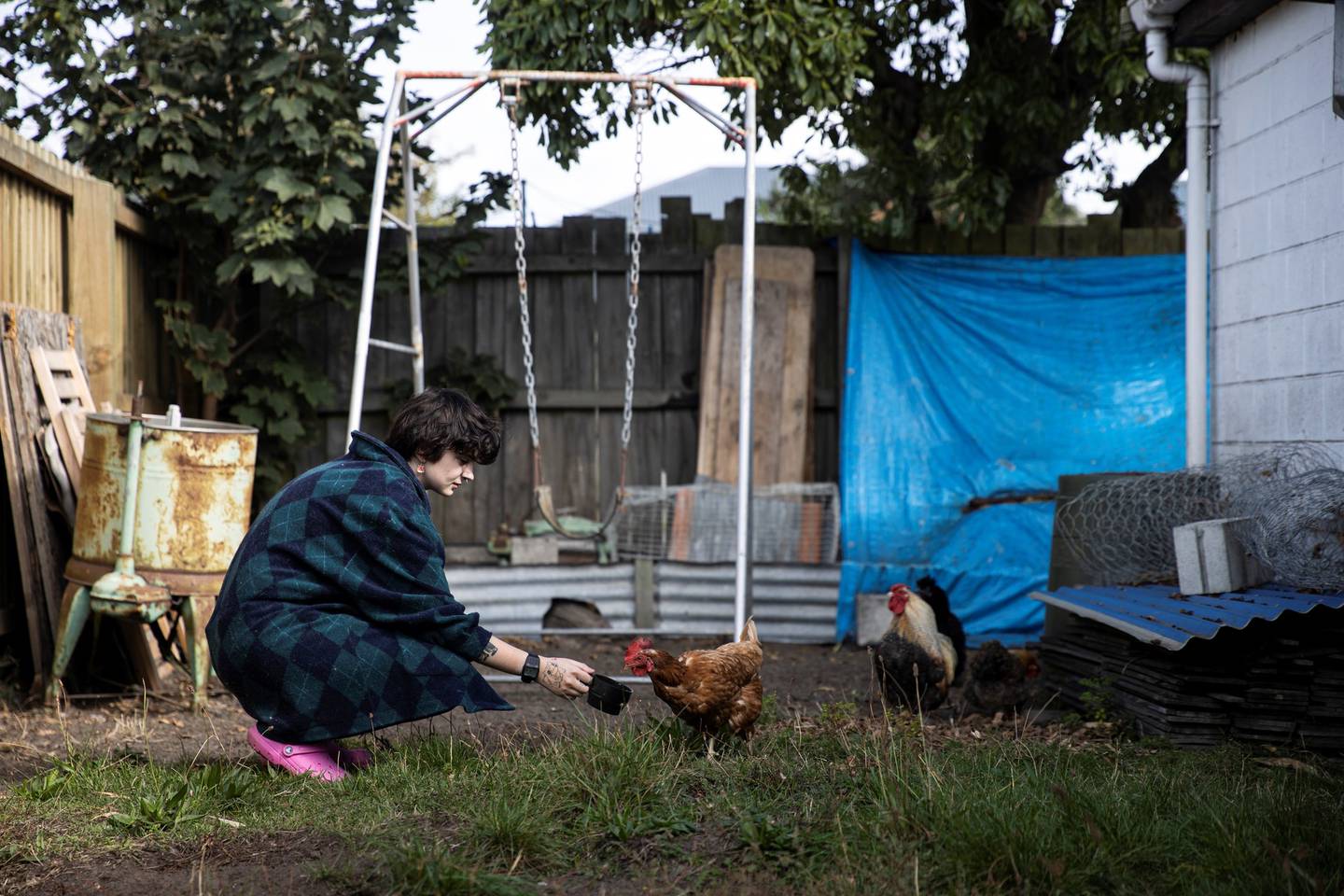 A complaint has been laid over the rooster's crowing at a residential North Beach property in Christchurch. Photo / George Heard

He then crows sporadically throughout the day. Parents and children passing on the school run sparks him into action, along with any visitors coming or going.

"He's like a guard dog," says Cook, a vegan who gives away the chicken's eggs.

Otherwise, she describes Babs as "pretty chill" and an animal who has a gentle nature, but a "huge personality", and often follows her around the property.

"He's pretty quiet except when he crows," she says.

"I can't even hear him when I'm inside. He's a great guy to have around."

"He thinks it's true Kiwi living," says Cook, whose family has lived there for 15 years.

The neighbourhood loves Babs, Cook says, and people often comment how they enjoy hearing him crow.

"They all love him and think it's hilarious to hear him crowing in the day and not just at dawn – it's just his way of communicating. They find it comforting."

The complaint came as a shock to Cook, who thought visiting council inspectors were Jehovah's Witnesses.

They asked if she had a rooster and said that they had received a complaint.

"I really panicked, worried they would take him away. We have a huge bond since I've raised him since he was a chick, and when you put in that much effort, you develop a very close bond."

Cook had earlier worried that neighbours might get upset at Babs' crowing but hadn't realised there were any issues.

She has bought him a velcro collar for his neck, which helped stifle his crows.

"As a result of our investigation we spoke to the owners of the rooster and advised them to take measures to stop the rooster crowing," the council's head of regulatory compliance, Tracey Weston said.

Cook now keeps Babs inside his enclosure a bit longer and make sure he's not let out before 7am.

And he doesn't crow late at night - or make a racket between 10pm and 6am.

"I think we're in the clear now," Cook says.

"I don't want him to go anywhere else. Babs is a very special guy."