A man has appeared in court charged with murder after a fatal stabbing at a community housing complex over the weekend - as a post-mortem starts for the victim.

The man has also has been charged with stealing other vehicles and assaulting a man in the hours that followed the alleged killing.

The victim's partner has also opened up about her loss, saying her heart was "screaming" for her love.

Emergency services were called to the address at about 3pm on Saturday after other residents found a 50-year-old man with critical injuries.

He died soon after. 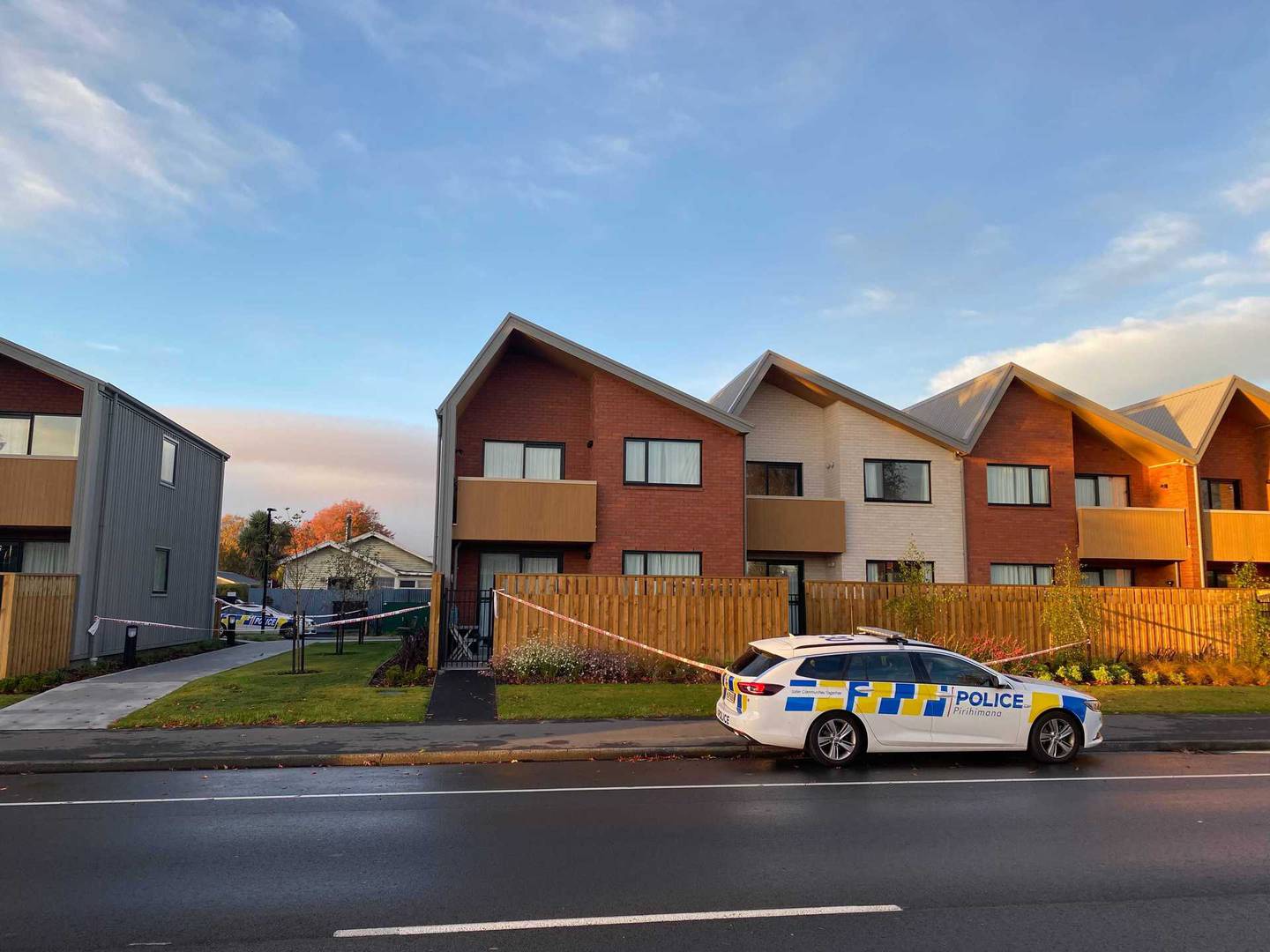 The housing complex in Christchurch where Daniel Hawkins died.

The victim has been named in court documents as Daniel Hawkins - also known as Kenneth.

A 28-year-old man appeared before Judge Stephen O'Driscoll via audio visual link in the Christchurch District Court this morning.

He did not engage with the judge when spoken to.

He has been granted interim name suppression.

Court documents show he is facing a raft of other charges including the theft of multiple cars and a cellphone, giving false information to police, grievous bodily harm using a weapon and impeding the breathing of another person by strangulation.

He was remanded in custody until his next appearance in the High Court at Christchurch on May 25.

The Herald cannot publish any further details about the alleged killer.

His lawyer told the court he was "not particularly responsive" when she spoke to him last night and this morning.

She suspected there were "underlying issues".

Hawkins was facing active charges and was on electronic bail at the time of his death, police said in court this morning.

Police are still at the complex carrying out a scene examination.

The process is expected to take several more days.

A post-mortem examination of the victim was underway this morning.

Nothing I'm saying or doing will bring you back to us ... I've been staring at this pic for a while, it's not often that smile of yours got captured," she posted, along with a photo of her and Hawkins together.

"You will forever be my Dan the man with a bark and bite.

"If only i could talk to you to say I forgive you and just hold you again ... no wonder the sky lit up the way it did last night.

"I love you babe forever and always keep shining up there."

She earlier wrote she was "so lost for words" at the loss of her partner and best friend.

"Waking up to cops telling me this ... what I would do to tell you I love you again, to hold you in my arms," she said.

"Please Dan my man I don't want to believe the cops or the social media posts."

She indicaqted the couple had not been able to have contact for some weeks.

"Now its turned into a lif time and nothing I do or say will bring you back to me or your family," she said.

"My heart is screaming for you...karma will get whoever did this to you."

Police have released a image of the alleged victim's car and appealed for any sightings. Photo / NZ Police

Last night Police appealed for sightings of a grey Holden Calais with the registration LDE987.

They said the car belonged to the victim and was believed to have left the property at 11.15am on Saturday.

It was abandoned twenty-minutes later on Monsaraz Boulevard near Halswell Rd around 11.35am.

The Herald has contacted the Ōtautahi Community Housing Trust who own the complex.

However, after the February 2011 quake, 89 homes were extensively damaged and had to be demolished.

It has been rebuilt and tenants have been moving in stages. Construction is still being completed on some of the units.

There was a heavy police presence at the scene today with officers combing the dead man's house for evidence and others doing an area canvas for information.

Washing could be seen drying on Hawkins outdoor line and all the curtains of his townhouse - where he lived alone - were pulled closed.

In 2018 it was reported that Hawkins - a Mongrel Mob member was involved in an incident in Kaiapoi.

He went to a house there wearing gang insignia and demanded items including money, tobacco, and drugs.

"You were obviously employed to be the muscle," said Judge Jane Farish, according to a Stuff article at the time.

The judge spoke of his extensive facial tattoos but at the time after hearing from his lawyer about his "potential to make something of himself" said the inking did not reflect the man he "really" was.

At the time Hawkins had completed drug and alcohol courses, and a life skills programme.

Stuff reported that Judge Farish urged Hawkins to think about moving back to the North Island where his family were based.

In 2006 Hawkins admitted six charges including unlawful possession of ammunition and explosives and production of cannabis oil.

Police told the Christchurch District Court that a search of Hawkins' address uncovered the drugs and restricted items all specific to the New Zealand defence force inclduing a fragmentation grenade, trip flares and more than 100 rounds of ammunition.

Hawkins claimed he was looking after the items for an associate but admitted the cannabis was for his own use.