Vodafone's New Zealand operation registered modest gains in mobile in the March quarter, but fell back slightly in broadband.

The results came in a filing overnight by the UK-based multinational, Vodafone Group, which has agreed to see its NZ business to Infratil and Brookfield for $3.4 billion.

For once, New Zealand was mentioned near the top of the investor presentation with the with "New Zealand €2.1bn disposal" featured on a slide headlined "FY 19: executing at pace on our strategic priorities."

In the NZ mobile market, Vodafone NZ enjoyed a net gain of 31,000 customers during the March quarter for 2.55 million total mobile connections (6000 on contract and 25,000 on pre-pay).

(The number of total mobile customers exceeds the population because some people have more than one connection as more and more gadgets support SIM cards).

Analysts look most closely at the number of customers on contract vs the number on pre-pay - who on average spend a lot less per month.

Here, the news is good for Vodafone NZ. A year ago, 41.3 per cent of its customers were on contract. That has edged up to 43.5 per cent.

But it still trails Spark on this key metric. Spark recently reported it had just under half its mobile customers on contract.

2degrees has 31 per cent of mobile customers on contract, according to a recent filing to the Toronto Stock Exchange by its North American parent, Trilogy International Partners.

A shakeup could be ahead.

The Commerce Commission is due to release a major report on the mobile market on Thursday morning.

Among other issues, the regulator has been looking at whether there is more scope for boosting so-called mobile virtual network operators or MVNOs - companies who resell a mobile service such as Warehouse Mobile, which is a re-badged version of 2degrees' mobile service.

MVNO's are a major competitive presence in the UK market, but have less than 2 per cent of the market here.

Spark's fixed broadband numbers have received a shot in the arm over the past couple of years from fixed-wireless (using 4G to deliver broadband into a home), where its rapidly added 129,000 customers. Vodafone NZ boss Jason Paris said yesterday that he wants his company to push harder into fixed wireless under its new ownership.

There has been speculation that Trustpower - 51 per cent owned by Infratil - may have to carve off its broadband business to ease regulator approval for its Vodafone NZ buyout. 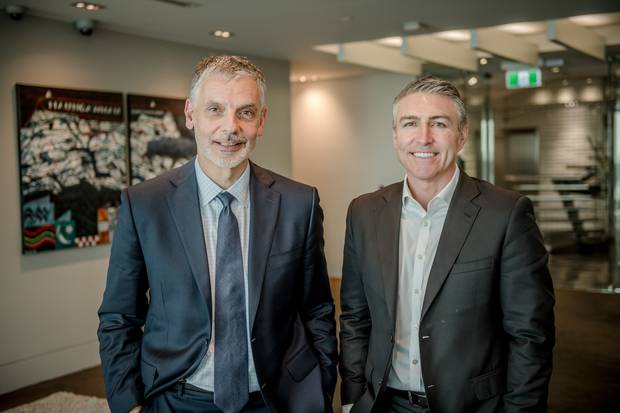 Vodafone Group does not break out quarterly figures for its subsidiaries, but yesterday in a regulatory filing citing yet-to-be-audited accounts, it said Vodafone NZ had revenue of $1.99b in the year to March 31 (a dip from the $2.05b in its most recent Companies Office filing), adjusted ebitda of $463m, capital expenditure of $253m and an adjusted operating free cash flow of $210m.

Vodafone NZ has recently been working through a major restructure that is seeing a number of jobs outsourced or offshored. A final update was recently delayed for several weeks.

Chief executive Jason Paris is painting the Infratil/Brookfield takeover as a best-of-both-worlds scenario.

Paris says his company will maintain the Vodafone brand and access to Vodafone Group technology from around the world, and preferential roaming rates, but will be able to push harder into areas like fixed wireless and streaming content with its local management.

The Vodafone NZ boss said his company missed some targets last year, and was 12 months behind rivals in introducing an unlimited mobile plan.

He says the restructure will free up funds for more investment in new technology, and that the new ownership will give Vodafone NZ a freer hand in strategy.