The Whaleoil blog has shut down, bringing an end to an online publishing effort which began as an outlet for mental health issues - and ended in infamy and financial failure.

The website published what it said would be its final blog post this morning, saying "numerous legal cases" had taken a toll, and highlighting a stroke suffered by founder Cameron Slater last year.

The company that owns the blog, Social Media Consultants Ltd, went into liquidation earlier this year owing around $660,000.

The company failure followed Slater's voluntary bankruptcy, which the first liquidation report for Social Media Consultants Ltd cited as a reason - along with his stroke - for the company being unable to continue.

The Whaleoil blog began in 2005, with Slater saying it was an outlet through which he was able to manage depression.

In the years that followed, it became increasingly politicised until 2014, when the book Dirty Politics revealed it was running political "hit jobs", targeting opponents of the National Party-led government.

A second book published this year, called Whale Oil, described a campaign of harassment against businessman Matt Blomfield, who had successfully sued Slater for defamation over a series of articles published on the blog. 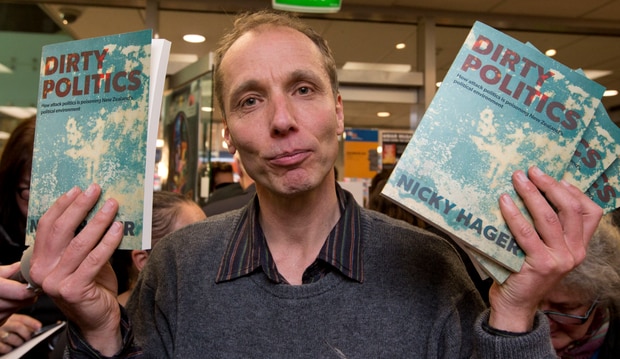 Slater is also currently party to another defamation case taken by health academics and researchers also targeted through the Whaleoil blog.

The final post on the Whaleoil site today floated a discredited conspiracy theory that "shadowy forces conspired" to destroy the blog by hiring the hacker who supplied Dirty Politics author Nicky Hager with digital content taken from Slater's computer.

The final post pointed visitors to a new site set up by those who provided content to Whaleoil. The contributors did not include Slater, who has told the High Court he is too unwell following his stroke to participate in the ongoing defamation case.