The Warehouse Group is gearing up to launch an e-commerce business selling a range of Australasian brands next month.

Although the company is tight-lipped on the launch, it is understood the e-commerce only business, similar to ASOS or The Iconic, but with a much larger selection, will sell clothing, homewares, toys, electronics, books, makeup and stationery from more than 20 brands.

TheMarket appears to be a subscription-based shopping platform and will offer 'rewards' for consumers and influencers active on the marketplace. Interestingly, the lifestyle site does not look to push the company's own retail store brands.

TheMarket will sell a range of products including children's clothing. Photo / Screenshot

It hopes to "become one of New Zealand's largest marketplace and celebrity influencer platforms" and to give influencers "direct access to collaboration opportunities with some of the biggest and best local and international brands".

The Warehouse was unable to provide any information on TheMarket at this stage but the launch of the business is scheduled for early August.

"We are working on a new e-commerce platform and we're still in the testing phase so we're not quite ready to talk about this," a spokeswoman for the NZX-listed company said.

The Market is currently in the process of hiring staff to run the platform, including e-commerce specialists, software engineers and digital designers. It has already appointed a customer service advisor and e-commerce coordinator.

A biography on its website site says: "We understand that life is hectic, sometimes you don't have time to go to a shop or to visit various websites to shop and sometimes you just need to browse to help you find the perfect gift.

"TheMarket provides a platform allowing customers to access a massive range of good quality items from retailers in NZ, Australia, UK and USA, products that may not be available outside of metro areas or not available within NZ."

The site is said to offer home delivery, delivery to a work address or to a "MarketPoint location" such as dairies or post offices - common in Australia. It states it has already established "hundreds" of MarketPoint locations throughout New Zealand.

The Warehouse reported retail sales of $714 million in the third quarter ending April 28, an increase of 13.2m or 1.9 per cent compared to the same quarter last year.

The Red Shed posted sales of 386m in the quarter, up less than 1 per cent, while Torpedo7 sales were up 6.9 per cent.

Online sales for the group were up 18.7 per cent year on year in the quarter. 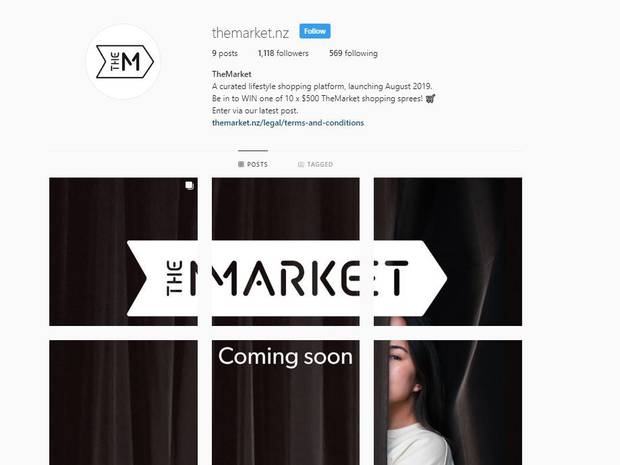 Grant Cotty, senior equity analyst at Hobson Wealth Partners, said he was surprised the group had positioned the marketplace as an amalgamation of smaller and lesser-known brands, and not necessarily to channel its own.

"To me, that means perhaps they feel their [own] brands don't generate traction or maybe that the product lines aren't really understood by the market.

"If you were to buy cheap priced homeware where would you go? Briscoes. If you're going to buy cheap furniture, where you going to buy it? Kmart. I think The Warehouse has lost a lot of those brand wars," Cotty said.

He said the Warehouse had fallen out of favour with consumers in recent years.

"It does make sense if it can actually offer good prices and make its offer at a product level rather than an actual brand store level. It still does raise concerns to me as to the strength of the underlying business if this is the way you think is best to interact with customers."

Cotty said the site would not cost the group much to operate, which would work in its favour. An online marketplace was good from both a margin and business point of view, he said.

"It wants to be a landing pad for consumers ... much in the old way that we used to walk into The Warehouse to look for things."

First Retail Group managing director Chris Wilkinson said he believed TheMarket was the group's response to the threat of Amazon and other e-commerce giants.

"What it is doing is maintaining relevance. They are wanting a share of the action in any way they possibly can, and that's not necessarily about using its own brands - it's essentially about being part of that wider retail market even though they haven't got strong representation in that themselves," Wilkinson said.

The Warehouse's plans to launch an online shopping platform was a "smart move", Wilkinson said.

"Ultimately, it will provide them with intelligence in terms of demands consumers have and they will be able to see trends and apply those to their own business.