Last year, the pay-TV provider reported a net loss of $156m after write-downs, and an adjusted net profit of $41m.

The company this morning also announced a 10-to-1 consolidation of its long-depressed shares, which will take effect on September 16.

FY21 revenue was down 5 per cent to $711.2m as Sky continued to gain streaming subs at a rapid clip (Neon, Sky Sport now and Rugby Pass subs were up a cumulative 57 per cent) but its much higher-paying satellite subscribers continued to fall, dipping from the year-ago 585,248 to 554,690.

Total customers fell from the year-ago 989,569 to 955,168 with the continuing fall in satellite customers, and streaming growing, but also losing a wodge of 154,000 customers who got Lightbox free under its previous owner Spark if they had a broadband or mobile account with the telco - an arrangement that continued until Sky rolled Lightbox into Neon in June. 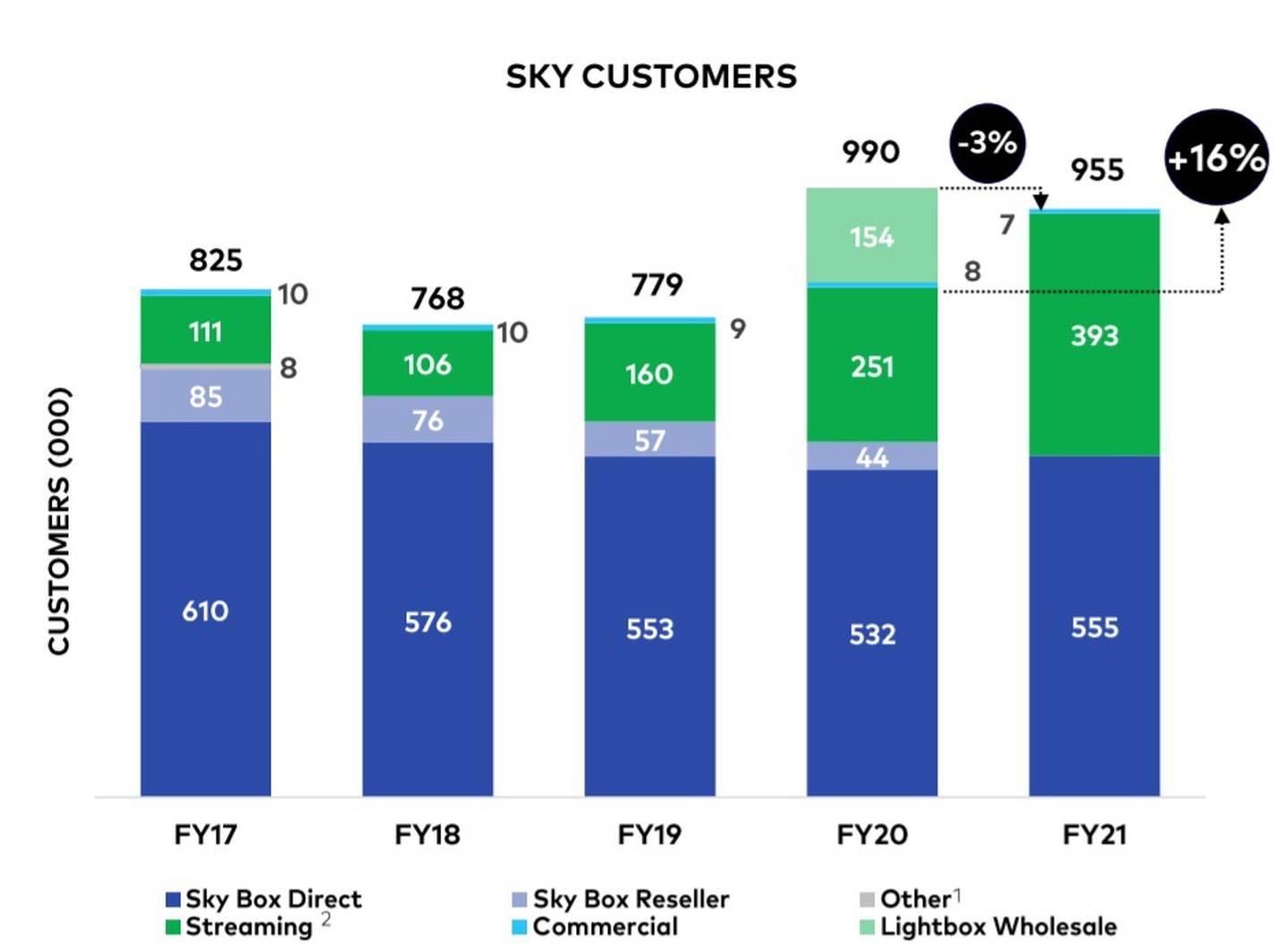 Sky TV's changing customer mix. The streaming category aggregates Neon, Sky Sport Now and RugbyPass subs. The "Lightbox Wholesale" segment was Spark customers who got Lightbox "free" with their broadband or mobile plan under a wholesale deal until Lightbox was rolled into Neon in June last year. Source / NZX filing

Sky faces the core issue that users of its streaming issues pay only around a quarter as much per month as its traditional satellite subs - meaning revenue has continued to trend downwards.

However, this morning Sky gave revenue guidance for FY22 of $715m to $745m - which would represent its first growth in turnover since 2016 if it can deliver. 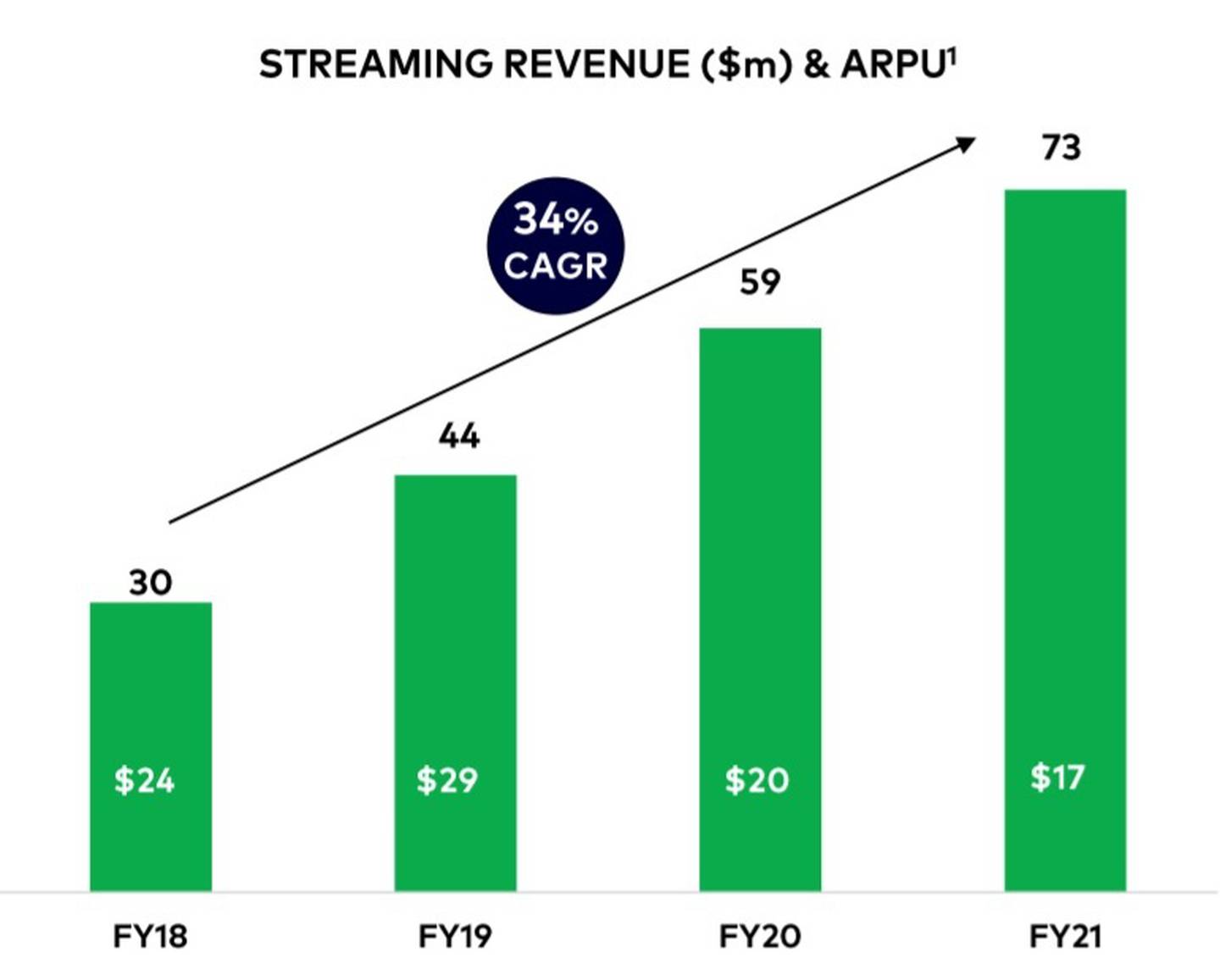 But because the cheaper, faster-growing Neon became a larger part of the pie, average revenue per user per month (arpu) dropped from $20 to $17 over the financial year. 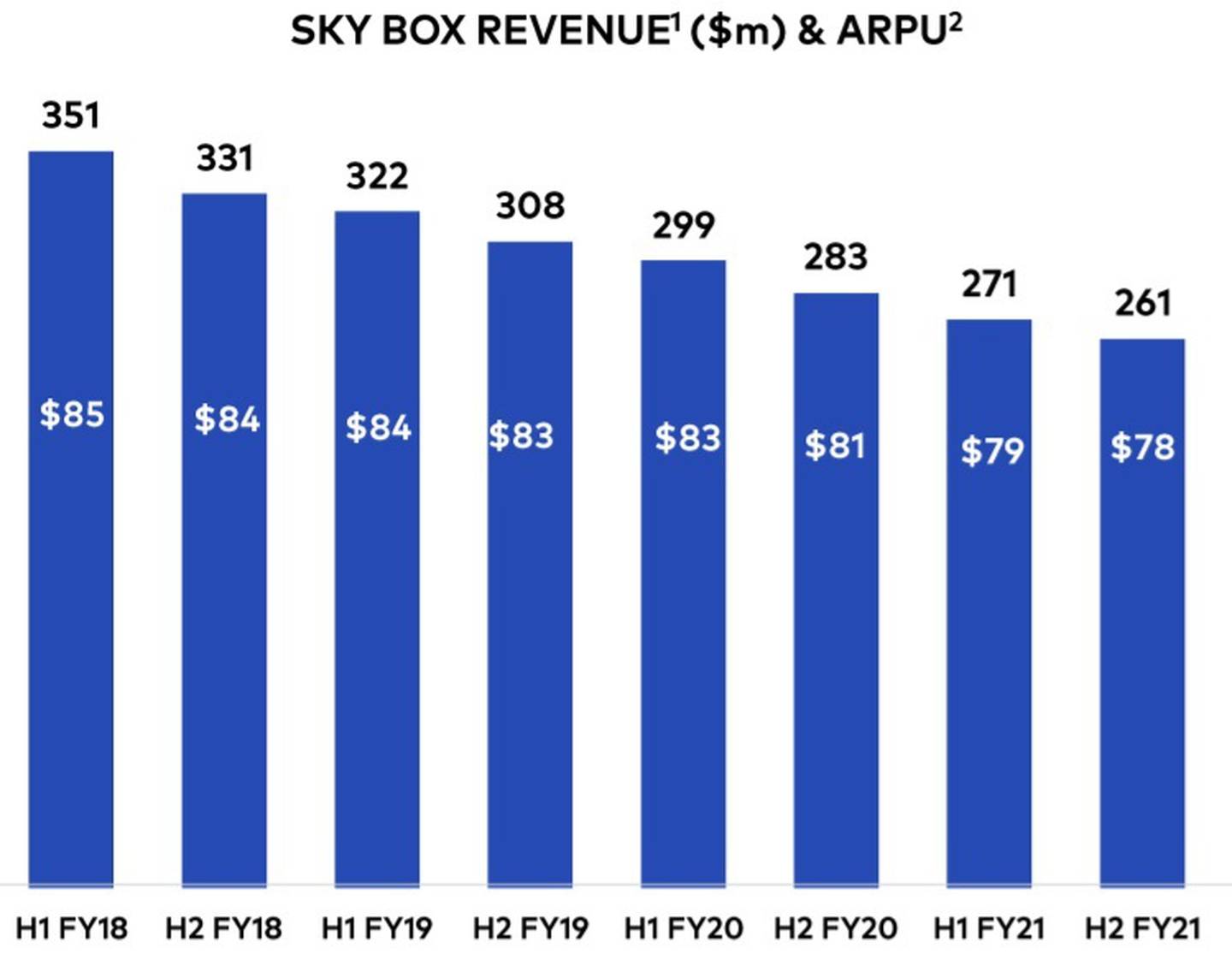 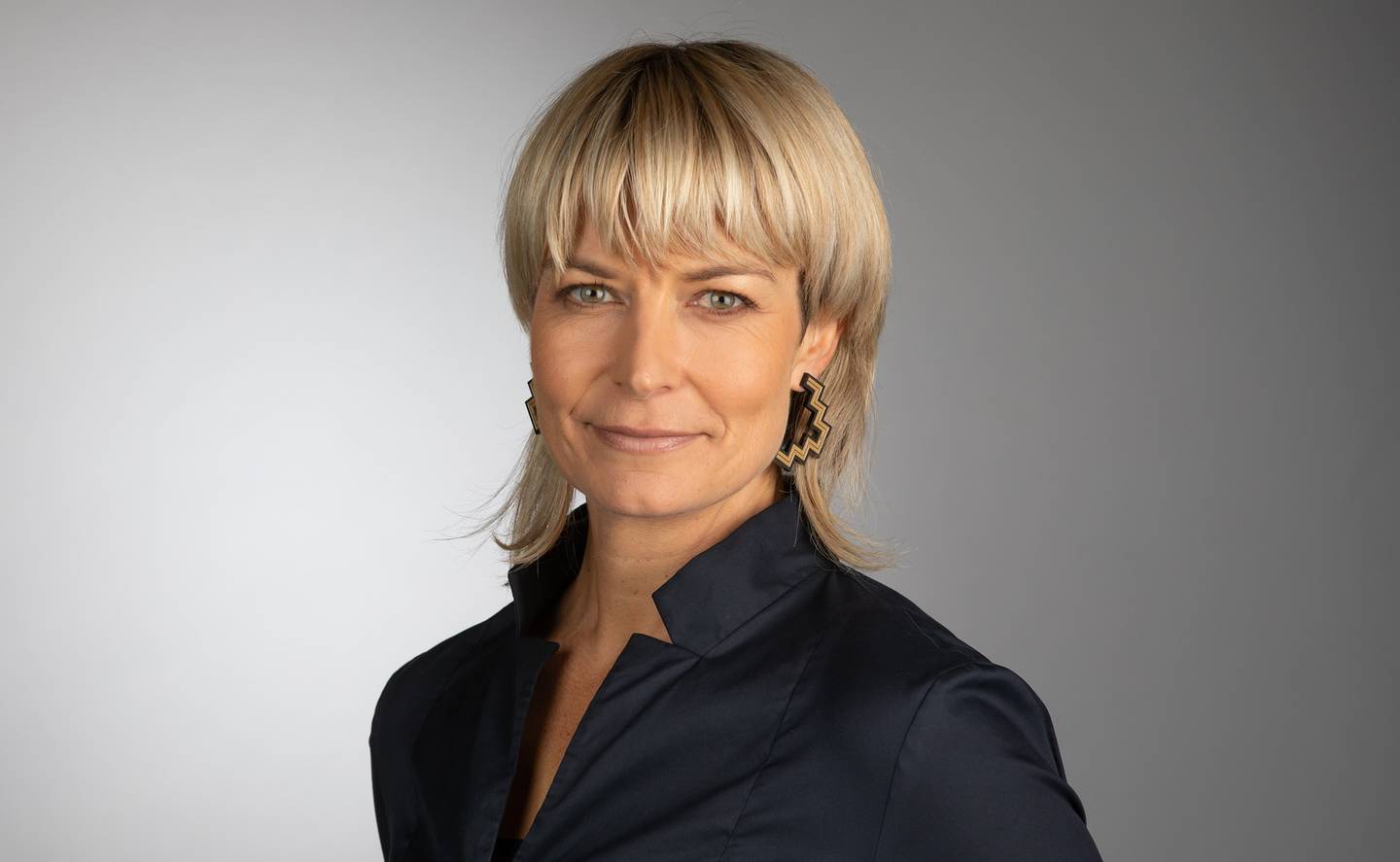 Talking to the Herald soon after today's result was released, CEO Sophie Moloney said the guidance was subject to change if the Delta outbreak persisted and caused major disruption to the sports calendar. On the upside, Moloney said Neon subscribers had spiked since the latest lockdown began.

To help pep-up turnover, and reduce subscriber churn, Sky earlier this year introduced Sky Broadband - provisioned by Orcon and Slingshot owner Vocus and offered at a cut-price unless you quit Sky's pay-TV service and hand back your decoder. Moloney said it was still "early days" and declined to give any take-up figures.

A recent Sky customer survey raised a number of other possible incentives aimed at shoring-up retention, including the potential lure of corporate box seats at rugby games and trips overseas.

Sky also faces the ongoing issue of Hollywood studios and TV content makers turning more and more to direct-to-consumer apps - a trend accelerated by the runaway success of Disney+, which is seeing Sky pay more for rights, losing rights (as with most Disney content) or settling for non-exclusive deals (as with its latest Discovery renewal, among others).

Earlier this week, as Chorus delivered its full-year result, its CEO JB Rousselot said his company had seen network traffic continuing growing - and that it anticipated direct-to-consumer apps from CBS and Discovery would launch soon in NZ, further boosting new media traffic.

Today, Moloney confirmed that Discovery's launch of a standalone streaming deal was expected, in keeping with the terms of Sky's new non-exclusive contract.

Sky is looking to at least keep third-party apps inside its tent with its pending release of a next-generation Skybox that will offer all of its channels over UFB fibre in resolution up to 4K ultra-high-definition, and include support for third-party apps.

Moloney said the new, Android-based box would be central to Sky's plan to boost revenue and profit.

Moloney said it would include third-party apps like Netflix, Amazon's Prime Video and Discovery+.

The Sky CEO wants as much app choice as possible, and says the fact the new box will be based on Android will lower development costs, and make it easy for streaming services - including potentially Spark Sport - to come onboard. 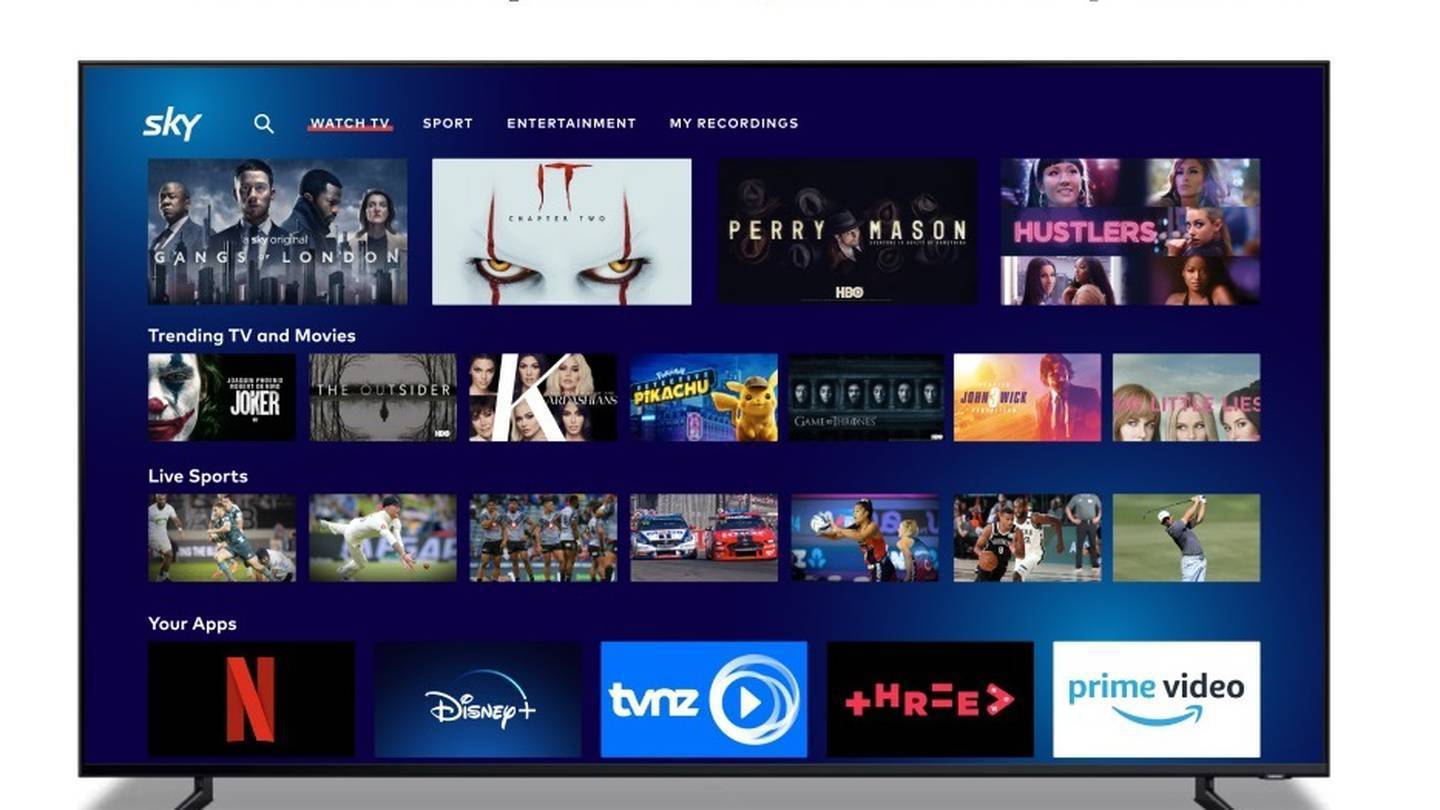 An image of a possible interface for the new decoder, as included in a Sky customer survey. Photo / Geekzone

Moloney said while she wanted as many apps on Sky's new box as possible as part of its "one remote to rule them all" strategy to become a one-stop aggregator, negotiations had yet to open with Spark over its app's inclusion, or any possible Sky clip of the ticket.

Some analysts see a 4K, streaming-friendly box as long overdue. But at the same time, mindful of pushback from some customers last time Sky had a major decoder upgrade, Moloney said "there will be no forced march" to the new Android box. Those who like the current decoder will be able to keep it.

Lull in the sports fight

The pay-TV broadcast now at least faces a period of relative calm on one front - sport, where the settling of Rugby League rights (with the World Cup going to Spark but the NRL remaining with Sky until 2027) represented the last major tussle over a code for several years.

The question now is whether Sky will have to raise the price of Sky Sport to accommodate its new five-year rugby rights contract, which kicked off this season and costs a reported $80m per year.

Moloney said Sky was currently assessing its pricing, which could lead to changes before the end of the year.

Sky shares closed Tuesday at 16.2c. Although the company raised its upgrade guidance, the stock has yet to recover most of the ground it lost during the initial stages of the pandemic.