Postcards from dairy owners protesting against restrictions on selling cigarettes appear to have been supplied by British American Tobacco.

The postcards - "thousands of them", according to Act deputy leader Brook Van Velden - were delivered to her this morning on Parliament's forecourt.

They follow the release of the Government's proposals for Smokefree Aotearoa 2025, which includes limiting tobacco sales to a limited number of specific stores.

"Restricting sales to a limited number of store types would make it substantially more
difficult to buy cigarettes. The result would be to reduce uptake by young people and
support smokers who are trying to quit," the discussion document says.

"Some commentators have suggested that tobacco products should be sold only in
specialist R18 stores. Pharmacies have also been suggested as an option that could
provide a strong link with smoking cessation advice."

About 5000 people a year die from smoking in New Zealand.

But several dairy owners today told Van Velden that it would hurt their businesses to the point that they might have to close.

The postcards, handed in a box to Van Velden, include the comments: "If nicotine is slashed, filters banned and price goes up, many people will go to the black market - these will badly hurt my business, increase risk of robbery to personal safety and could force store to close." 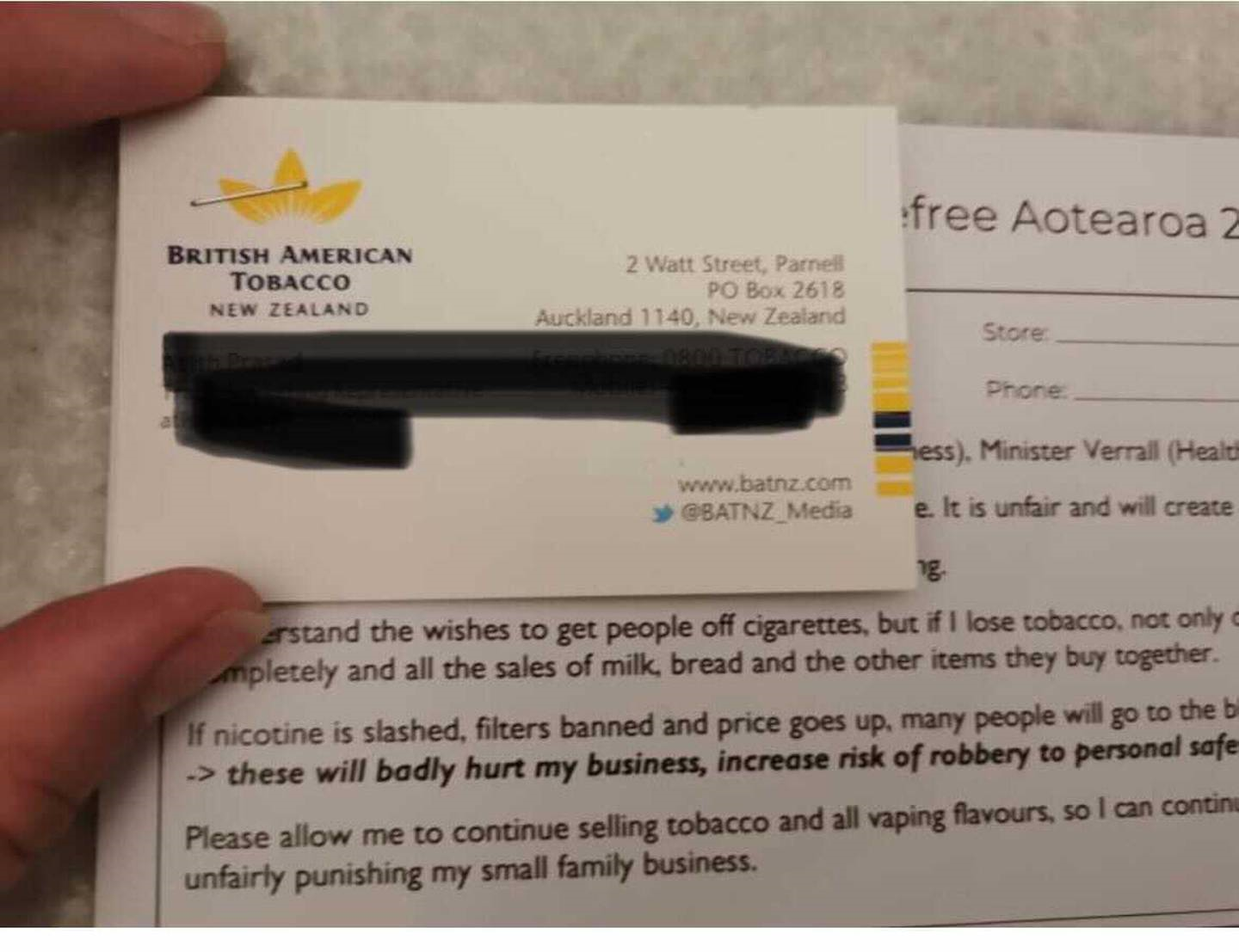 The postcard sent to dairy owners, with a British American Tobacco business card attached. Thousands of postcards were delivered to Parliament today.

The British American Tobacco employee whose business card was attached to the postcards that were sent to dairy owners declined to comment when contacted by the Herald.

The supermarket and former dairy owner from the Waikato who showed the Herald the business card attacked to the postcard said that the tobacco company only cared about itself - not the dairy owners.

"Profitability is very low, and dairy owners are absolutely in a headlock with the cigarette companies as to the recommended retail price," said the supermarket owner, who wanted to remain anonymous.

"If it is a situation like this [where] everyone is going to be together, if it is British American Tobacco, or Imperial [Tobacco] or Philip Morris - we don't think about it.

"Each and every retailer is hurting. So if there is a card or not, it doesn't matter. We're still going to be here with the petition."

Van Velden said she didn't know who had supplied the postcards, but that shouldn't be the focus.

"I have no idea where the postcards came from. I know that the postcards are here today. And the small business owners are asking for us to listen to their concerns and we are happy to.

"If you're a dairy owner, when someone comes in to buy cigarettes, they're not just buying cigarettes, but also buying breed milk and butter. So for these small retailers, they will take a huge hit by not being able to provide that full range of service."

Asked about the health benefits of lower smoking rates, Van Velden said: "We've seen cigarette taxes increase year on year for years, and yet there are still New Zealanders who smoke. What we're doing by increasing taxes - making it harder for those people who do smoke - is putting more cost on our poorest New Zealanders."

She said the Government's attempts to curb smoking rates would fatten the black market for tobacco.

"At the same time, you're hurting New Zealanders who do smoke hardest, and some of those are our poorest."