An Apec-branded Covid face mask, a handwritten letter from Jacinda Ardern to a future NZ Prime Minister and even a copy of the Herald's Apec 2021 supplement are among items being tucked away within a time capsule which will be "unearthed" when New Zealand next hosts Apec.

In her letter to a future prime minister, Ardern expresses her hope - for the sake of everyone - "that you don't find yourself hosting in the middle of a pandemic!"

"May your time as chair be smooth, with all leaders showing up on time, totally engaged, and ready to change the world for the better," she wrote.

When New Zealand last hosted Apec in 1999 all the political leaders from the other 20 economies (bar one) turned up in person. There were even three official State visits.

This year was markedly different with all events and meetings held virtually.

Ministry of Foreign Affairs and Trade deputy secretary Andrea Smith said despite that there were actually some physical things to remember the host year by.

"It does then allow whichever team is coming in in whichever year in the future we host Apec again to have some mementos and some thoughts from the team here.

"Obviously we've got thousands of pages of documents and files that the team will have complete access to. But it is a nice way of marking what is a significant event for New Zealand and giving that incoming team a little something to focus on at some point.

"When the 1999 Apec was hosted, nobody could have predicted what 2021 would be like. We can't predict what 2040 or 2045 or 2035 - or whatever it is - is going to look like but we are providing this unique insight into what happened during this host year." 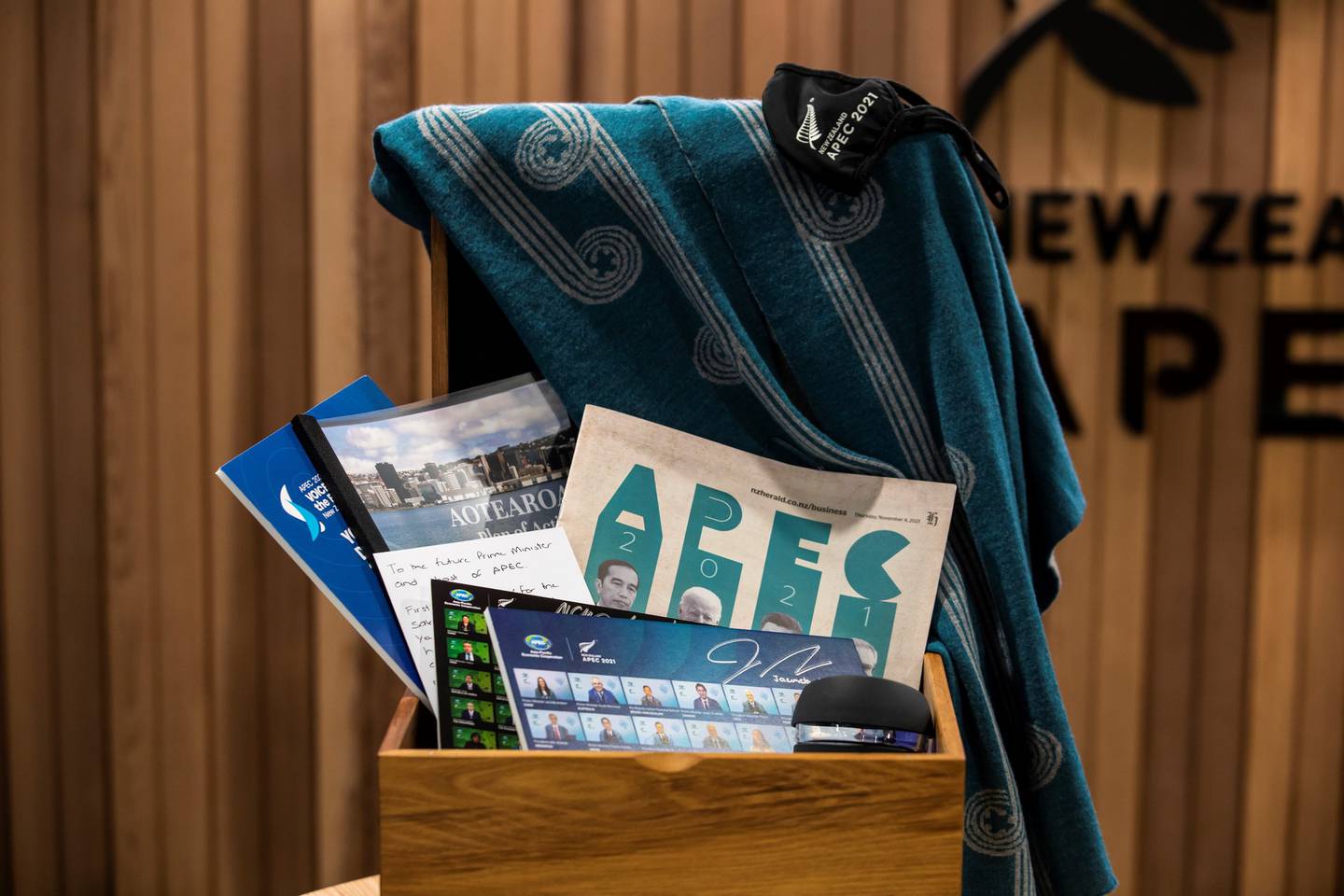 The Herald's Apec 2021 report features along with a handwritten letter by Prime Minister Jacinda Ardern - all within a rimu time capsule due to be brought out when New Zealand next hosts Apec.

So what is actually in the Apec time capsule?

"All sorts of things", says Smith. A leaders' garment such as those sent to all of the other 20 Apec leaders who put them on for their virtual Leaders' meeting; signed copies of "family" photos for both the leaders' meeting and the Apec ministerial meeting - "the Prime Minister and Ministers Damien O'Connor and Nanaia Mahuta have signed those".

Smith adds, "we've got the Apec 2021 face mask to remind everyone we were delivering in Covid times."

Then there is a copy of the Aotearoa Action Plan which will be rolled out over the next couple of decades in the leadup to when NZ next hosts.

A copy of the Voices of the Future declaration and the CEO Summit programme.

Both Smith and fellow deputy secretary Vangelis Vitalis who led the Apec Senior Officials meeting have written to their future counterparts.

A copy of the Herald Apec 2021 supplement which Smith said was a nice scene setter and good commentary. "It felt like to me as a really nice lead-in to Apec Leaders week."

Then there is the wooden sign from the door of the Tamarau room from which ministerial meetings were hosted. The name "Tamarau" was gifted by Wellington's Te Ati Awa iwi and refers to a celestial being which the iwi felt appropriate given Apec was hosted through satellite virtual means and from the tallest building in Wellington.

Smith said she told her future successors that hosting Apec was a momentous opportunity, reflecting on the importance of enjoying it as well as doing it well and expressing confidence that they too will deliver a host year that New Zealand can be proud of.

The time capsule is a rimu box of the same type used for sending out the leaders' garments.

"We will lock it all up and it will be buried in the ministries' archives where I am sure it will gather dust alongside many other things and be able to be readily remembered and accessed in 20 years' time or whenever it is." Jacinda Ardern's handwritten message to the future prime minister who will chair Apec when New Zealand next gets to be host. Photo / Supplied

To the future Prime Minister and host of APEC.
Firstly, I hope (for the sake of everyone) that you don't find yourself hosting in the middle of a pandemic!
May your time as chair be smooth, with all leaders showing up on time, totally engaged, and ready to change the world for the better."
Kindest regards
Jacinda Ardern.
P.S It will all be worth it.