Around 3000 new apartments and terraced houses are planned in blocks up to four levels on part of south-east Auckland's Formosa Golf Course, to be cut from an 18-hole to a nine-hole course.

Brett Russell, managing director of Russell Property Group which is a part-owner of the 255ha site where the golf course is now, said a plan change application had been lodged.

The apartment, commercial, hospitality and retail project could take 15 to 20 years to complete, he said.

The Bob Charles-designed golf course will go from 18 to nine holes but the developers say they are investing in the course to bring it up to a better standard.

The clubhouse is being modernised and will have dining as well as conference facilities to attract more people, the statement said. 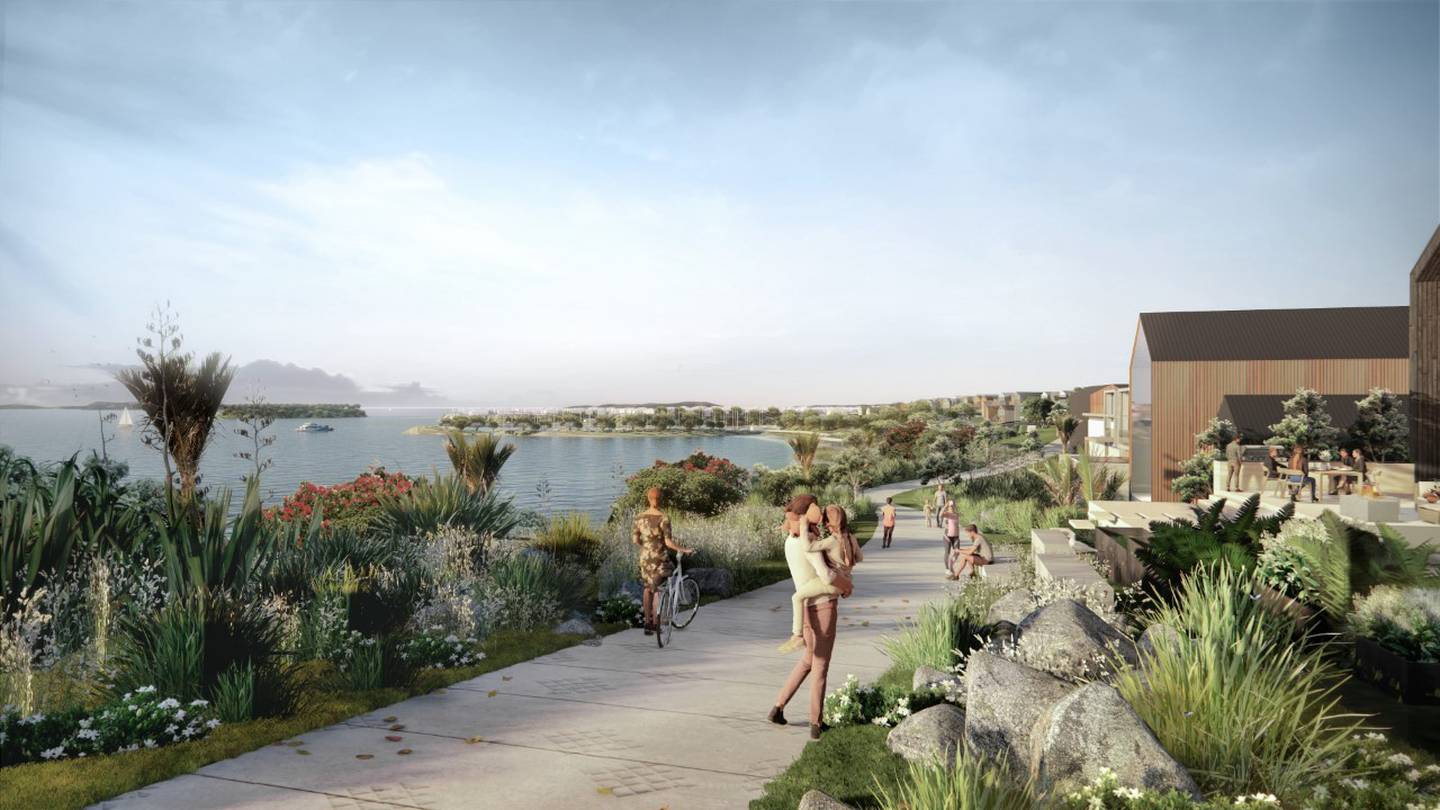 How the ex-golf course might look once developed and landscaped. Photo / Supplied

Plans for dealing with water, wastewater and stormwater had been developed, along with road upgrades, and a more frequent ferry service was possible, he said.

Coastal boardwalks, playgrounds, parks and open spaces are planned and Russell said that could be a catalyst for the community to get new primary and secondary schools.

Ngāi Tai ki Tāmaki has mana whenua for the area and supports the scheme, Russell said.

Hapai is an iwi owned property fund that has 20 investors. These entities bought 5 per cent of the Beachland South Limited Partnership, the statement said.

Two years ago, the Herald reported how an entity established by the NZ Super Fund and the owner of one of New Zealand's largest construction businesses had bought Formosa Golf Resort and would amalgamate that with a neighbouring site. Restaurants are part of plans on the land. Photo / Supplied

A joint announcement in 2020 came from the fund and Russell Property Group which owns major national builder Dominion Constructors.

That would buy 250ha of land: the 170ha club at 110 Jack Lachlan Drive and a further 80ha at 620 Whitford-Maraetai Rd already owned by an associate of Russell Property Group. The properties are collectively valued by Auckland Council at $81.5 million.

No price was announced and no plans were revealed at the time.

In 2019, Auckland Council filed 17 charges of sewage dumping against three people at Formosa.

Steve Pearce, the council's manager of regulatory compliance, said the defendants were of the Formosa Golf Club.

"Auckland Council has filed 17 charges against three defendants relating to discharges of wastewater at the Formosa Golf Club in Beachlands, east Auckland. The defendants have been summoned to appear at the Manukau District Court," Pearce said at the time.

The club referred inquiries about the charges to general manager Graham Chin.

Early in 2019, Chin had acknowledged a problem with the wastewater treatment plant at Formosa but said at the time it was being fixed and although there would be a temporary disruption, expert contractors were on the job.

This came after previous notices and warnings to fix the problem at the resort which has accommodation, an 18-hole golf course and club facilities, a restaurant and fitness centre.

The discharge was having a detrimental effect on the land and nearby Waikopua Creek, council officers found.