In the three weeks to March 15, sales of toilet paper have increased by 87 per cent compared to this time last year, this follows a surge in sales of household cleaners and facial tissues, up 76 per cent and 67 per cent respectively.

Within food retailing, rice experienced the biggest surge in demand from shoppers in recent weeks following the Covid-19 outbreak, with sales up 69 per cent compared to this time last year.

This follows sales of canned and dried vegetables, up 62 per cent, canned meals up 58 per cent, milk products up 49 per cent, and canned fish and seafood up 36 per cent.

The biggest increase in sales of grocery items were by far foods with long-lasting shelf life.

These figures confirm the scenes of chaos within experienced supermarkets in recent weeks, as panic buying fuelled by fears of shortages due to the Covid-19 pandemic have set in.

Supermarkets have been forced to urge shoppers to "shop normally" and provide reassurance that the country's supply chains are robust and New Zealand will not run out of food. Sales of other food items such as cereal, coffee, small packaged goods, bread, soft drinks, snack foods and cheese have increased by more than 10 per cent in recent weeks.

Outside of consumables, non-food items such as body wash and cough and cold treatments were up by more than 50 per cent.

Other medicines, health supplements, dishwashing products and laundry detergents were up more than 20 per cent.

"Despite the Government and grocery retailers' asking for Kiwis to shop normally, shoppers have spent an additional $127m in the last three weeks on grocery items at New Zealand's supermarkets compared to the same time last year," she said.

"Products like rice, bread, canned meals, coffee, toilet tissues, household cleaners and cough and cold medicines are seeing a new wave of growth as consumers continue to stockpile their pantries." 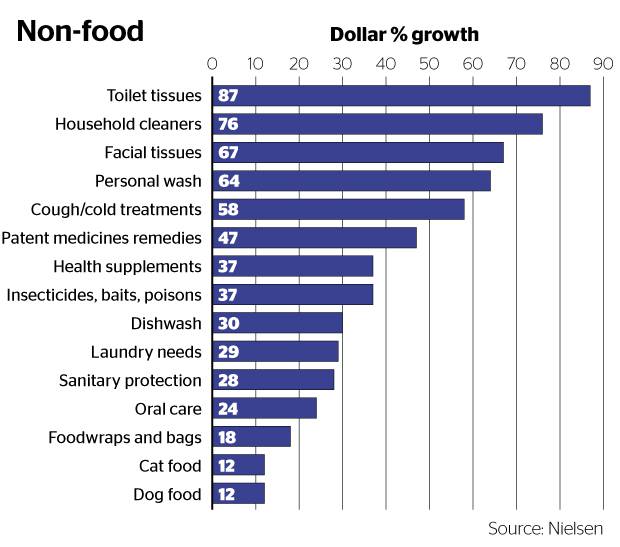 Voice warned that New Zealand's major supermarket operators Foodstuffs, owner of Pak'nSave, New World, Gilmours, and Woolworths, which operates Countdown stores, needed to adapt to the to "disruption of normal purchase trends that the novel coronavirus (Covid-19) outbreak" had introduced.

Figures from Paymark, which processes 75 per cent of the country's electronic card transactions, show New Zealanders spent $1.3 billion in the week ending Sunday, March 22 - up 7.5 per cent on the same week in 2019.