Hardware chain Mitre 10 has apologised after a staff member's posts on social media threatened to mow down cyclists.

Screenshots of the staff member's comments began circulating on social media, showing the worker liking a comment saying it was "perfectly legal" to "quickly mow down an aggressive cyclist or pedestrian", as long as they were "on and off the footpath within 10 seconds".

In a post on Facebook, the staff member also shared an event that appears to be a retaliation to the Harbour Bridge protest, with the caption: "I'll be polishing my bull bars for this".

The post included numerous comments from other people encouraging violence against cyclists.

"Bring the truck around here when you're done … and I'll wash any blood or evidence away for you," one commenter said. 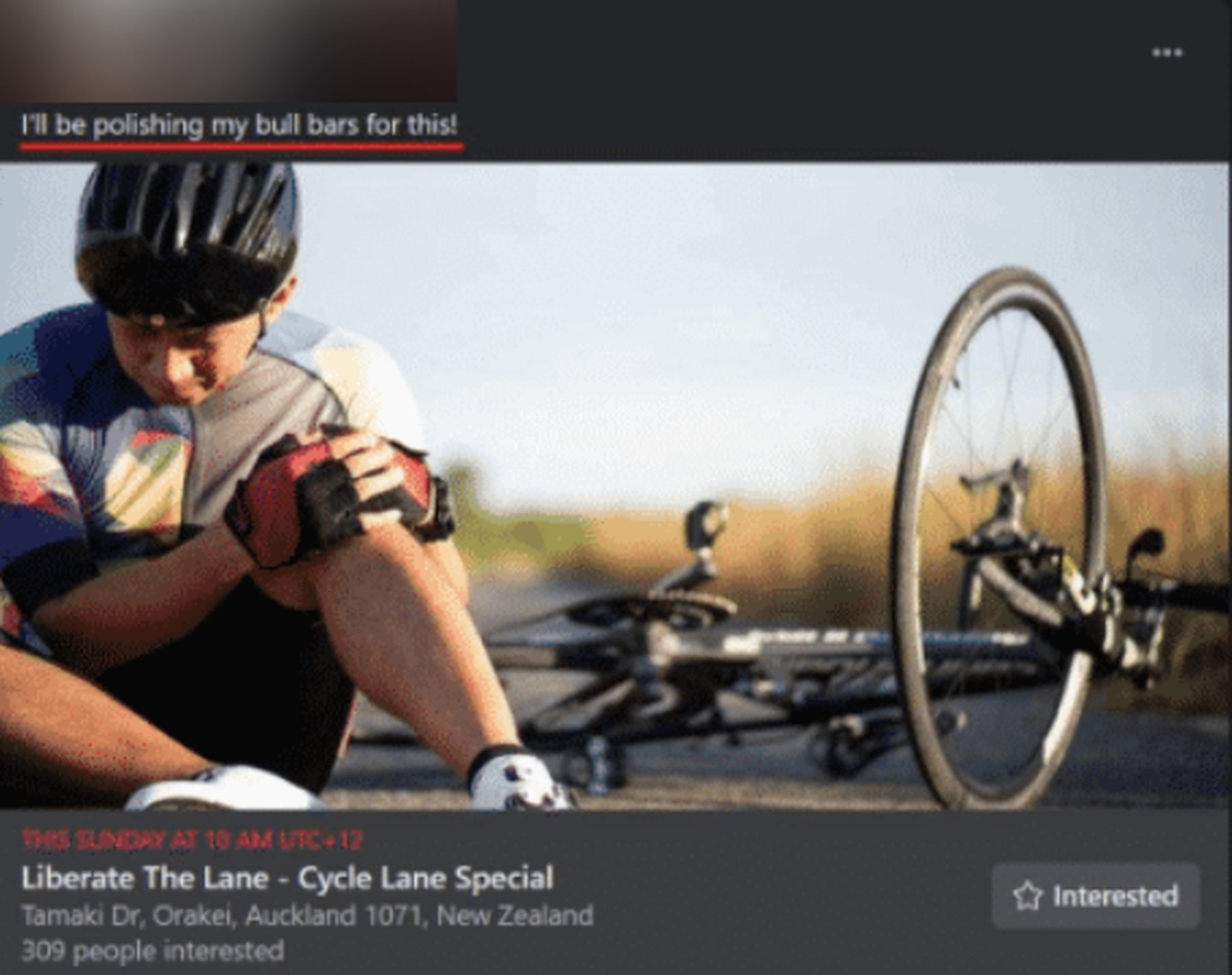 One of the screenshots from the worker's posts circulating on social media. Photo / Facebook

"Does Mitre 10 sell tacks? Asking for a friend," one person asked. The staff member then responded saying they do and "I get a discount".

Following the comments, Mitre 10 says it has told the person to remove all posts on this topic from their profile.

The company says the worker has apologised.

"We are disappointed that they have caused offence to the cycling community and we absolutely do not share their views. To be clear, Mitre 10 does not tolerate bullying, racism or any other discriminatory behaviour," Mitre 10 said in a statement on social media.

"Thank you to the members of the public and our team who have brought this to our attention. We take this situation very seriously and we are taking all steps to resolve this appropriately."

The post generated controversy on social media, where many defend the staff member's right to say as they please and slam Mitre 10 for having a "woke" reaction, while others pointed out the person incited violence and used Mitre 10's logo on their social media.

"So you're against freedom of speech? If it's on their own personal page with no reference too M10 at all, then what business is it of yours. They haven't brought your business into disrepute, so what right do you have too censor what they say. After all, freedom of speech is a right," one person commented on the Mitre 10 statement.

Auckland councillor Richard Hills weighed in on the matter on Twitter, pointing out the staff member did use the company's branding on their social media and mentioned their staff discount in their threats.

"He posted about murdering cyclists & giving mates discounts at Mitre 10 for products to help with murders & joked about washing blood off vehicles," Hills posted.

"But sure, free speech advocates, have your moan. Although I'm sure you also believe a business has a right to protect their image. And I'm sure you don't think it's cool for people to threaten death and injury on others," Hills wrote in a separate tweet.