Luxury real estate agent Michael Boulgaris is in hospital after a riding accident on Saturday.

The head of Boulgaris Realty fell from his horse at a Takapoto Estate Showjumping event in the Waikato, according to the estate's equestrian manager Kerry Willetts.

Willetts was onsite and helped load Boulgaris into the rescue helicopter that took him to Auckland's Middlemore Hospital.

"He was lying back and obviously in some pain ... but he was coherent and talking fine," he told the Herald. 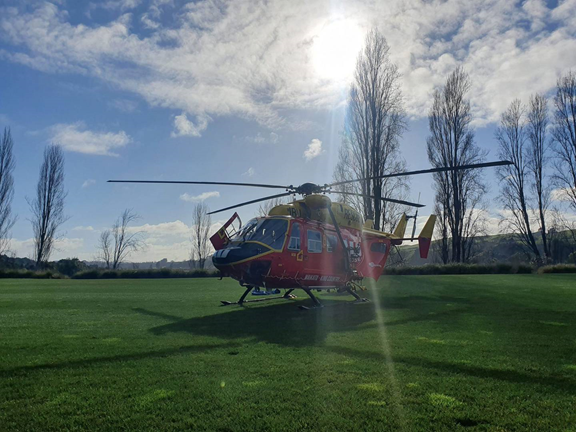 Waikato Westpac Rescue Helicopter responded to the callout, describing a patient in their fifties who sustained injuries falling from a horse. Photo / Supplied

Waikato Westpac Rescue Helicopter responded to the callout on Saturday, describing the patient in his 50s as being in a serious but not life-threatening condition.

Willetts says the accident happened in the morning during warm-up, with a doctor and emergency nurse on site.

"He didn't actually get to jump," he said.

The Herald understands Boulgaris suffered a neck injury and had surgery on Saturday night, but is unable to confirm with Middlemore Hospital at this time.

The agency website describes Boulgaris as a household name for luxury property in Auckland's wealthy Remuera and the eastern suburbs, and someone who spends "all his spare time ... with his animals".