Kiwi dairy company Lewis Road Creamery has signed a deal with American supermarket chain Whole Foods, said to be worth up to US$5 million ($8m) in its first year.

Whole Foods, owned by e-commerce giant Amazon, is now selling Lewis Road Creamery grass-fed butter in 270 of its stores in 37 states throughout the United States, following its debut in the market in 2018 through organic grocery chain Erewhon in California and supermarket Central Markets in Texas.

Lewis Road Creamery was said to have caught the attention of Whole Foods, and has since become the first New Zealand dairy company to be stocked nationwide by the speciality organic supermarket.

The butter sells for US$6.99 ($11) for an 8oz pack in Whole Foods - the most expensive grass-fed butter the retailer sells by weight.

Lewis Road Creamery founder Peter Cullinane, who is also chairman of Herald publisher NZME, said the deal showed that New Zealand could and should export branded products and "not as an export commodity", which often sell for the lowest possible price. 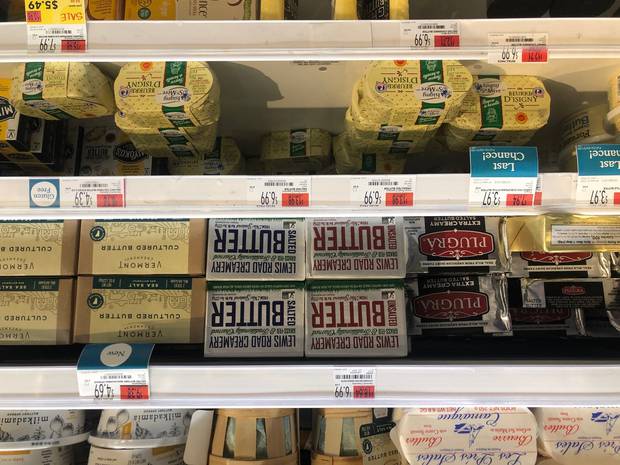 Sales of Lewis Road Creamery's grass-fed butter in the United States took off at the end of 2018. Photo / File

"The things we take for granted - our cows living outside, eating fresh grass - are absolutely prized over there, to a degree that's taken even us by surprise," Cullinane said.

"Genuine grass-fed and authentic free-range are at top of the dairy list for Whole Foods' customers. The other major thing they're looking for is the non-GMO sticker. We can deliver all that in spades."

Sales of Lewis Road Creamery's grass-fed butter in the United States took off at the end of 2018, with product selling twice as fast as it does in New Zealand.

The company expects to export 400 tonnes of butter to the US this year and said the deal is worth US$5m in its first year. Its butter is made from milk from Southern Pastures farms in Canterbury, that meet stringent 10 Star Premium Standards.

Lewis Road Creamery general manager Nicola O'Rourke said New Zealand companies often put the United States in the "too hard basket", but the premium paid for our products was worth the effort.

The company's grass-fed butter is also sold in 950 Woolworths' stores in Australia.