When the Premium paywall was introduced on April 30, the company said its target was 10,000 paid digital subscribers within 12 months. That target was hit inside six weeks.

The company reported today a half-year operating Ebitda of $19.4 million - down 16 per cent compared with the same time last year.

Net debt was reduced by $8.1m to $90.2m over the half as part of an ongoing drive to reduce debt by $10m to $15m per annum while maintaining growth opportunities.

No dividend was paid, as previous flagged, as the company invests for growth. 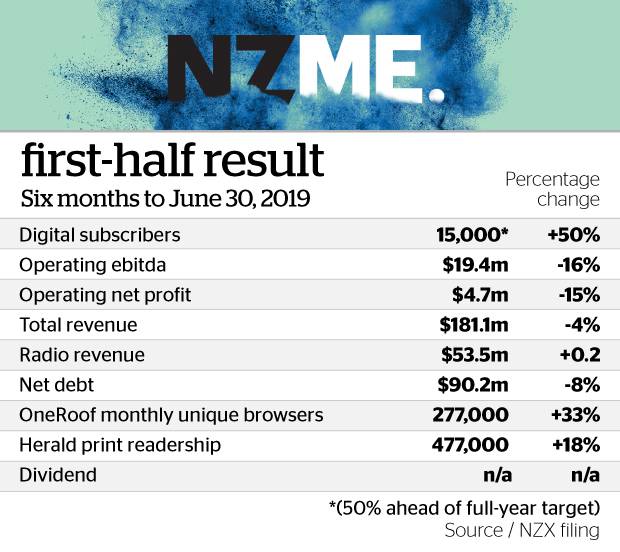 Boggs said the launch of Premium digital subscriptions had been a "huge success".

Making the announcement as part of NZME's 2019 half-year financial results, Boggs said the subscriptions and revenue from Premium had exceeded expectations.

The chief executive also highlighted an 85 per cent increase in property website OneRoof revenue to $1.3m, and a turnaround in radio revenue.

"Given the well reported market headwinds, this is a solid result supported by some strong growth in our digital initiatives," Boggs said.

"For the first time in several years radio revenue is in growth. Even more pleasing is that this part of our business is showing continued momentum going into the second half of the year," Boggs said. "This is a great turnaround for NZME Radio. It is the result of our focus on ensuring we have the best talent on air to drive the resurgence of this channel. We've also been enhancing our sales teams with some of the best radio specialists in the market, to make sure we convert our increased share of the radio audience to deliver great results for our advertisers," Boggs said.

NZME's multi-channel real estate platform OneRoof is also going from strength to strength. Launched just over a year ago, OneRoof revenue grew to $1.3m for the first half of 2019. With its unique blend of high-quality real estate journalism and property listings, OneRoof is driving audience engagement with monthly unique browsers growing 33 per cent in the past six months to 297,000.

"While our 'new kids on the block', NZ Herald Premium and OneRoof, are already proving their potential value to NZME, there have also been some exciting highlights in our print business during the past six months," Boggs said.

ForsythBarr said earlier that there were signs OneRoof is gaining traction and audience momentum.

Total digital revenue fell 3 per cent to $28.2m, however, on a softer advertising market.

"NZME's audience and brand growth have taken place in an advertising market that continues to be challenging. Ongoing pressure on print and digital advertising, along with a small decline in print circulation revenues, have impacted the financial results in the period," NZME CFO David Mackrell said.

"An ongoing focus on costs has contributed to a reduction in underlying operating costs during the period of $4.8 million. We are pleased to report we have reduced net debt by $8.1 million in the six months," Mackrell said.

Boggs said: "While we continued to experience market challenges in the past six months, there are some encouraging signs in advertising spending as we head into the second half of our financial year, with third-quarter bookings up 6 per cent year-on-year."

New owner Nine confirmed Stuff is still for sale. So far, there have been no takers.

Earlier this month, The Australian reported that NZME had tried to re-animate plans for a merger with Stuff, with a direct approach made to the government in a bid to circumvent the Commerce Commission. A spokesman for NZME said the company did not comment on speculation. Stuff chief executive Sinead Boucher told the Herald, "There is nothing like that brewing. It is not on our agenda at all."

NZME shares closed yesterday at 52c. The stock is down 20 per cent for the year.