The coronavirus pandemic has forced the World Economic Forum's annual meeting of world leaders, business executives and other heavyweights to go virtual for the second year in a row, but organizers still hope to catapult the world into thinking about the future with a scaled-down online version this week.

The gathering, an online alternative to the event typically held in the Swiss ski town of Davos, will feature speeches by the leaders of countries including China, India, Israel, Japan and Germany as well as panel discussions with business, government and philanthropy figures like Dr. Anthony Fauci, the top U.S. infectious disease expert who will talk about Covid-19, and Bill Gates and John Kerry, who are expected to discuss climate change.

Organizers still hope their plans for a larger in-person gathering can go ahead this summer. Until then, here are five things to watch at next week's online event:

President Xi Jinping, who hasn't left China since the coronavirus emerged in early 2020, will be beamed in – just like last year – as perhaps the top headliner of the event.

He traditionally uses appearances at international gatherings like Davos to appeal for cooperation to fight climate change and the coronavirus and lambast what Beijing sees as US efforts to hold back China's rise and dominate global governance.

In a speech Monday, Xi could well again tout changes that Beijing says are opening the state-dominated economy and reject complaints that it wants to detach from international trade. His comments reflect the ruling Communist Party's desire for global influence to match China's status as the second-largest economy.

Keep an eye out for any mention of self-ruled Taiwan, which China considers part of its territory and has threatened to attack, and claims to the South and East China Seas or parts of the Himalayas, which have kindled tension with its neighbours.

One of those neighbours with tense ties to China is India, and Prime Minister Narendra Modi also takes the virtual floor Monday.

During the 8-year-old tenure of Modi, the star of the Hindu nationalist BJP party, India has seen an upswing in attacks against the Muslim minority. India's political parties are gearing up for state elections, just two months after Modi's government made a rare retreat on an agricultural reform bill that drew huge protests from farmers.

The campaign has drawn crowds of tens of thousands, even as the omicron variant, like elsewhere, has driven a surge in Covid-19 cases.

HOPING FOR A POST-COVID WORLD

It's impossible for the Davos crowd to overlook the health crisis that has upended its plans for the last two years.

The pandemic gets a top billing on Monday, with Fauci and the CEO of vaccine maker Moderna joining a panel discussion that addresses what's next for Covid-19, which has taken several big turns as the omicron variant sweeps the globe. 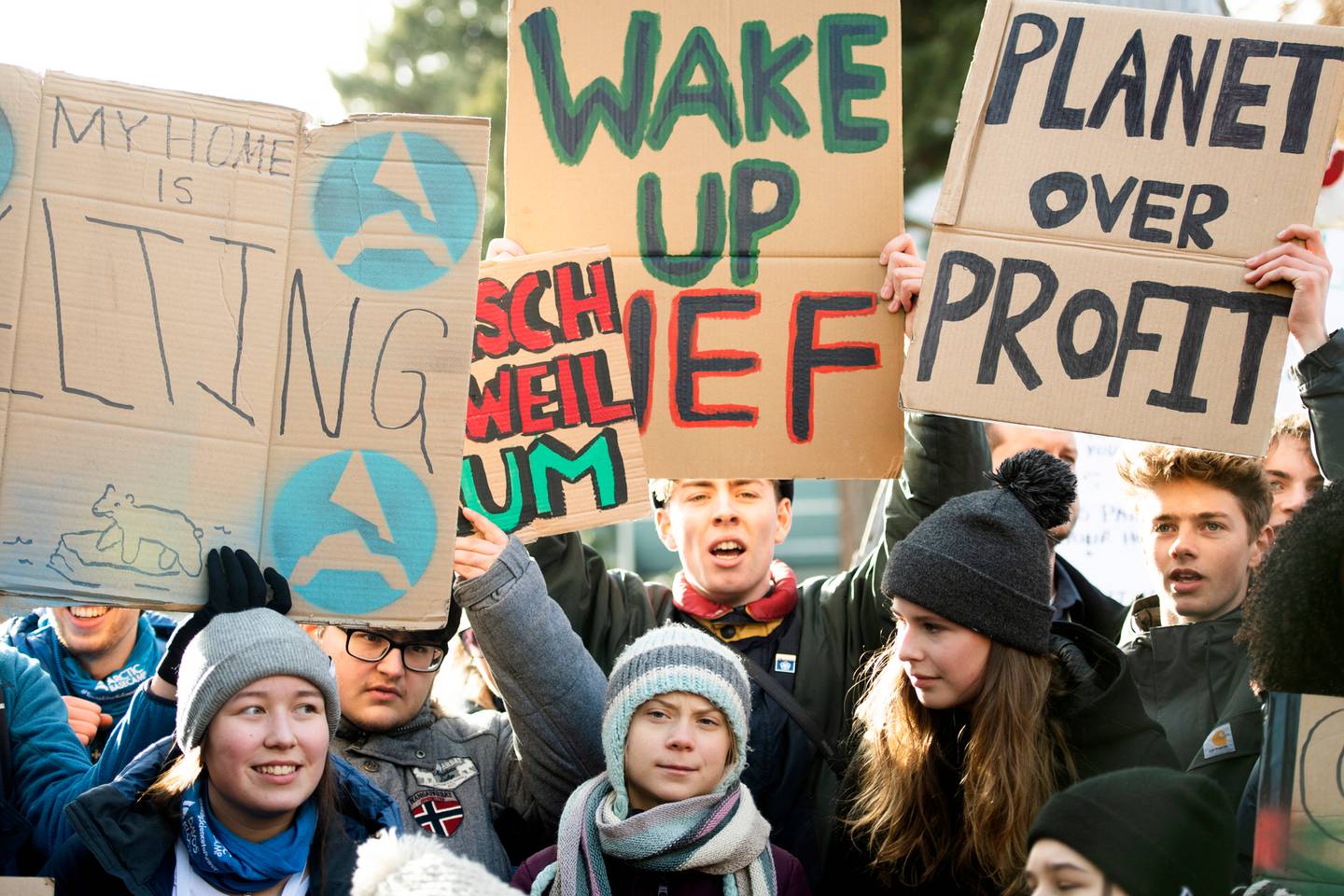 The Davos event has long attracted protests as shown by this image taken in 2020. Photo / Getty Images

On Tuesday, World Health Organization chief Tedros Adhanom Ghebreyesus is certain to promote his often-repeated call for greater vaccine equity at a panel on the subject. Many developing countries remain far behind their rich counterparts when it comes to access to vaccines. WHO says greater vaccine equity can help prevent the emergence of worrisome, highly transmissible variants like omicron.

Climate change and energy – along with a regional look at Latin America – get top billing Wednesday, with a speech by the Saudi energy minister and a look at how the world transitions from its dependence on fossil fuels. Kerry, the special envoy for climate under U.S. President Joe Biden, joins Davos stalwart Gates – recent author of "How to Avert a Climate Disaster" – on a panel on climate innovation.

TECHNOLOGY, TRADE AND THE ECONOMY

True to its name, the economic forum never strays far from the world of business activity. The week rounds out with discussions on issues like capitalism for a sustainable future, trade at a time of strained global supply chains, and how government actions are needed to produce sustainable and equitable recovery after the pandemic.

U.S. Treasury Secretary Janet Yellen gets the last word Friday with a talk at the virtual forum, where she has an opportunity to promote President Joe Biden's plans to reengage globally to prevent new environmental catastrophes. Amid the pandemic and rapidly rising inflation, the former Federal Reserve chair also could touch on financial recovery efforts, the administration's $1 trillion infrastructure law and her support for a global corporate minimum tax agreed to by more than 130 countries.