An airline lobby group says some carriers may abandon New Zealand due to high airport fees and government charges as profits are hit by the coronavirus outbreak spreading around the world.

The Board of Airline Representatives has broken down the cost of an Economy ticket to Australia and has found that on average airport infrastructure charges account for about 23 per cent, government levies and taxes 26 per cent and air traffic control 4 per cent. Airlines make up less than half the ticket price at just 47 per cent.

The figures were released as Air New Zealand and Qantas warn their full-year profit could be hit as much as $75 million and $156m respectively as a result of the Covid-19 outbreak and both have cut routes to Asia and across the Tasman.

Other carriers in Asia-Pacific have been hit even harder with Cathay Pacific and Singapore Airlines making deep network cuts.

Auckland Airport has said the coronavirus may cost it $10m this year.

The board says the Government should now consider direct support for the aviation sector, as one senior airline source said demand for travel ''has fallen off a cliff'' in what is seen as the worst hit to aviation since the 9/11 terror attacks.

Justin Tighe-Umbers, executive director of the board (BARNZ), says even before Covid-19 New Zealand was running a risk of airlines relocating to more profitable routes.

He said proposed cost hikes for landing in New Zealand on top of the reduced demand after the coronavirus outbreak may have a ''double-whammy'' effect on traveller numbers. 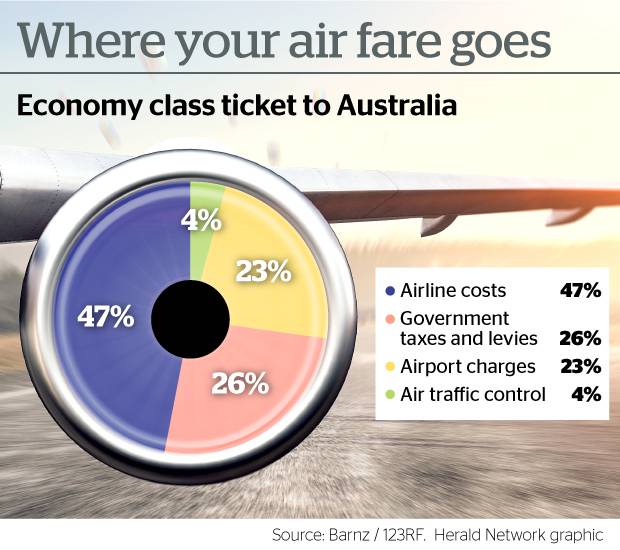 "I don't think passengers realise how much of their air ticket is made up of fees and levies."

In the past decade border agency costs in NZ have gone up around 89 per cent and airports' up 16 per cent, according to figures from Barnz which has 28 airline members. 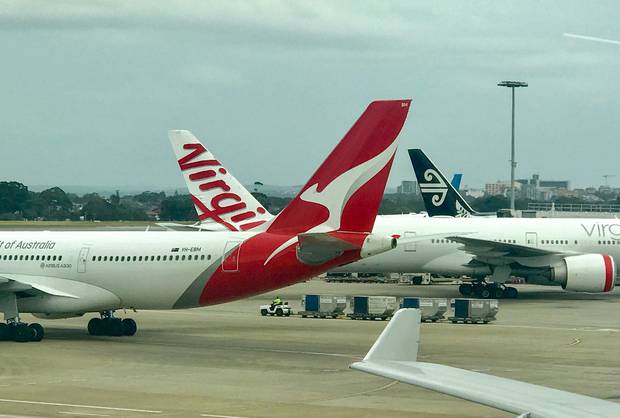 Airlines say charges and fees make up 53 per cent of an Economy fare across the Tasman. (Photo / Grant Bradley)

The total cost increase for fees and levies per international passenger (which is a passenger who arrives and then departs NZ) went up $51.7m in the year to July 1, 2019, and by July this year it will be another $41.1m.

The board says that excluding fuel - which fluctuates markedly at times - airline charges per passenger have fallen by 21 per cent. Between 2019 and 2022 Airways charges will increase 21.4 per cent, Aviation Security up 51 per cent, MPI biosecurity up 39 per cent and Customs up 12 per cent. Last year border levies of $35 for many travellers were imposed to help fund tourism infrastructure and conservation projects.

"Barnz members believe these increasing border costs for airlines and passengers are not sustainable in the long term."

At its annual meeting Barnz welcomed the Government's announcement of an $11m stimulus to help the tourism sector but said adding to passenger costs would not stimulate demand in the environment created by Covid-19, which is close to being labelled a pandemic by the World Health Organisation.

A pandemic is when an infectious disease spreads easily from person to person in many countries. Justin Tighe-Umbers, executive director of the Board of Airline Representatives (BARNZ). (Photo / Supplied)

Tighe-Umbers said some countries, like Singapore, have announced packages to help their aviation sectors.

"New Zealand could look at extending its help to aviation too. This country needs to ensure it remains a profitable route for airlines," Tighe-Umbers said.

The country's $17.1 billion international tourism sector depends on airlines to deliver travellers from both short and long-haul destinations.