Viya, a livestreamer on internet giant Alibaba's online shopping website Taobao, holds a record of selling $66 million worth of product in a single day.

On Friday, during a livestream from Auckland that kicked off at midnight (8 pm China time), Viya facilitated the sale of tens of millions of products from more than 40 New Zealand and Australian brands to her millions of fans.

Viya is considered a KOL or key opinion leader and has nearly 6.5 million followers on Taobao, ranging from teenagers through to those in their 50s - most of them are ready buyers. It is reported that her followers will buy whatever she recommends without reading about the product.

Products Viya promotes often sell out within a matter of seconds. 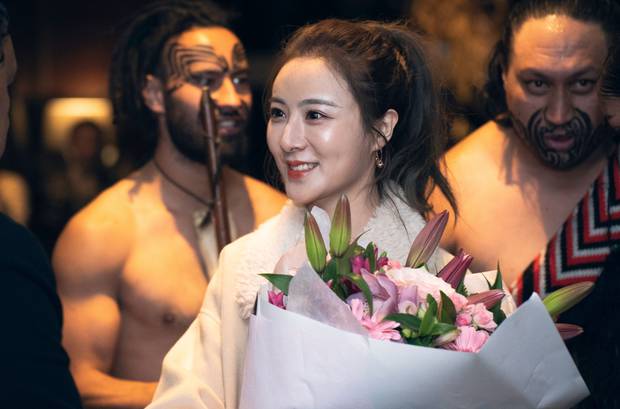 The livestream, which took place from her Remuera hotel room, featured an alpaca and live haka at one point. She showcased product mostly from New Zealand brands, including Trilogy, Wild Ferns, Linden Leaves, The Collection, as well as product from Vogel's, Douglas and Ukiwi.

Other top selling items during the live stream included a BB cream from GeoSkincare, and an Australian Lanolin oil moisturiser.

A screenshot of Viya during her livestream on Friday, featuring an alpaca. Photo / Screen shot

Viya's team visited New Zealand around a month ago to visit factories to decide on what products she would feature in the live stream and to negotiate "special prices" for her audience, a spokeswoman from Viya's team said.

She said many New Zealand brands were unable to participate in the livestream - despite interest to - as they did not have enough stock to facilitate the millions of transactions which are booked from being featured in her videos.

Richora Honey general manager Jerry Li told the Herald the influx of orders from the event was a "logistical nightmare" and as a result he and his team would be focused on sending out orders over the next few weeks.

Viya has a net worth of US$30m, and last year generated sales of $2.7 billion from her live streams on Taobao.

In an interview with the Herald, Viya said she chose to visit New Zealand, and to hold a livestream here, as she like millions of Chinese consumers loved products from New Zealand.

"Fans love New Zealand but why many cannot buy product before [now] is they are concerned about the price, the quality and whether they will get the right product. My trip here is to prove New Zealand products are authentic and organic as thought," said Viya, translated live from Mandarin to English.

Asked if she thought the livestream in New Zealand would break her personal sales record, she said, she was not fazed and instead wanted to recommend good products to her audience.

"My audience has tried my recommendation of New Zealand supplements and cosmetics and they are asking for more."

Auckland was the third stage of Viya's global livestreaming trip, she livestreamed her way to $57m sales in Thailand three months ago, and in Korea, 12 containers of products sold within five hours generated more than $30m in sales.

Livestreaming has been a main focus for many Chinese e-commerce platforms.

Taobao has its own set of livestreaming influencers, and more than 1200 of them have over a million fans. Last year, 81 influencers generated over US$15m ($23m) in sales each through livestreaming.

"Livestreaming is now becoming an emerging marketing tool to empower businesses and drive sales," Smulders said. "Livestreams by key opinion leaders are an increasingly important channel for New Zealand brands to connect to Chinese consumers and communicate their brand story."

Taobao generated more than 100 billion RMB in gross merchandise volume (GMV) through livestreaming sessions in 2018, an increase of almost 400% year-on-year.

Viya was formerly a singer, and a Taobao store owner selling her own clothing. She was later signed as a model for Taobao and then was asked to be become "a broadcaster" for Alibaba's Tmall platform. She has been livestreaming for about three years.