Burger Fuel says it is putting crowd controllers outside all its 56 New Zealand stores after customers mobbed an Auckland store last night waiting for contactless pick-up, defeating the purpose of the contactless nature of the system.

The company has issued a statement this morning admitting that "major volumes of orders following five weeks of no operation resulted in some stores struggling to control crowds at peak collection times" on the first day of alert level 3 on Tuesday.

In response, it has:

Under the rules for alert level 3, takeaway outlets can operate only "if you have pre-ordered contactless pick up or can provide home delivery".

But a photo posted on social media showed at least 30 people packed together outside Burger Fuel's Glenfield branch at 9pm last night waiting to collect their orders.

Many people commented on the Glenfield community Facebook page worrying that "before we know it, these sorts of people would put us back to level 4", and urging Burger Fuel to put marks on the footpath to keep people two metres apart.

One resident who was waiting for a bus outside the burger outlet said: "I felt so uncomfortable standing there waiting for a bus to go home. Burger Fuel need to get a better system - that's just putting too many at risk."

Dan Arakawa, who first posted the photo, said: "I know people are getting sick of lockdown but we are NOT in normal life aren't we???? We can do this better and hope this will get sorted."

"SHUT DOWN if you don't have proper protocols for the herd of sheep coming to your door please," one customer posted.

Another wrote: "I'd like to be safe and going to a company that can make sure that I will be kept safe. Wow!"

Another person on the Glenfield page commented: "I assume people were so close because they needed to hear them call out when their order was ready, not a good system!"

Others suggested that BurgerFuel should ask people to wait in their cars and phone them when their orders were ready.

The company spokeswoman said its stores were "inundated with a stampede of customers, way beyond what we had anticipated".

"We are adapting to a totally new environment, with safety being our highest priority," she said.

"We appreciate our customers' support and we ask for their patience and assistance to ensure that physical distancing is maintained at all times." 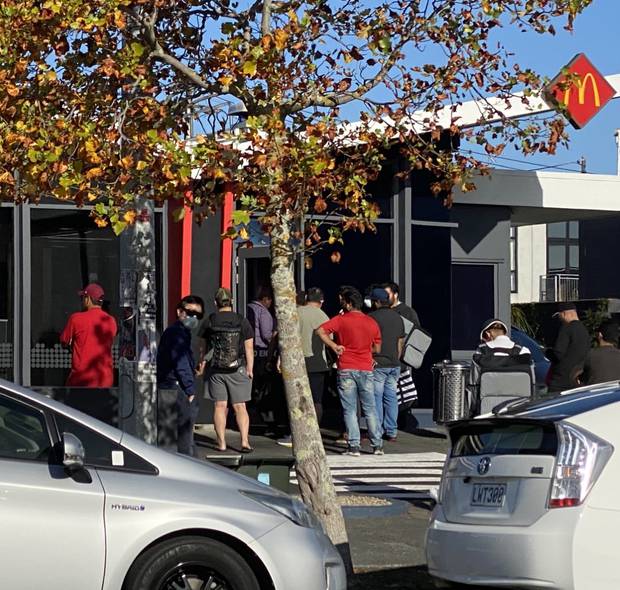 At least 13 Uber Eats and other delivery drivers waited for deliveries outside McDonald's in Grey Lynn at 3pm on Tuesday. Photo / Supplied

Meanwhile McDonald's says it has reminded Uber Eats and other services collecting deliveries from its stores to observe the required two-metre social distancing rule after another photo circulated yesterday showing 13 men, apparently delivery drivers waiting to collect orders, waiting outside McDonald's in Grey Lynn at 3pm.

A spokesman for McDonald's said the Grey Lynn restaurant was "by some margin the biggest restaurant for Uber Eats in the country".

"While we have developed new physical distancing and contactless service procedures, and restaurants had traffic management plans in place, the volume of customers definitely caused some challenges when we reopened on Tuesday," he said.

"At some restaurants we had third party delivery drivers congregating, waiting for orders. We had signage in place and restaurant managers asked drivers to observe social distancing, but in some cases this was ignored.

"We have spoken with our delivery partners and asked them to remind their drivers of distancing protocols, and we have taken additional steps with security and signage at our restaurants."

Police said they were called to the Glenfield Burger Fuel store.

"Overall, police across Auckland were really happy with the behaviour yesterday with the reopening of fast food outlets and other restaurants," a spokeswoman said.

"We were called to a small number of incidents last night where people weren't adhering to social distancing," she said.

"One of these was a takeaway outlet in Glenfield. There was a large group congregating, police attended and education was given to ensure a better and safer process."

Auckland Mayor Phil Goff said images of people congregating as they picked up takeaways and visited parks and beaches were of concern, and called on Aucklanders to continue to follow social distancing rules.

"If you are congregating, intentionally or unintentionally, to get food or coffee or at the park, this is going to hinder the good work we have all done over the five weeks of level 4 lockdown," he said.

"Aucklanders have done a really good job at level 4 and that has meant we have saved lives. We must continue to do that.

"The Prime Minister has said repeatedly that we need to continue to be vigilant and we cannot slip back into our pre-lockdown habits. I know this is hard, especially after more than a month of being in level 4, but we need to keep going for a little while longer.

"Please remember that playgrounds are still not to be used. You have to stand two metres apart if you are waiting in line. Still limit your travel and extending your bubble. We need to follow these rules if we are going to successfully go from level 3 to level 2.

"No one wants a return to level 4 lockdown again, but that will all be dependent on how well each and every one of us follows social distancing rules."