By Jordan Bond of RNZ

Unabated - and escalating - housing costs in Auckland are causing mental health problems, prompting relationship issues, and contributing to some of the country's other ailments, according to some at the raw end of the city's market.

Since Auckland went into lockdown, the average house in the region is $113,000 more expensive. The average one now costs $1.48 million, up 28 per cent in the last 12 months.

For some young people in Auckland, if you don't laugh at the cost of housing, you cry.

He reckoned it would take him decades to scrape together a deposit.

Make it your business to know

Start your day with the latest business headlines straight to your inbox.

"Yeah, nah, I don't see it happening for me, not any time soon. Maybe [in my] late 40s - up until then I'm buggered. On top of having to pay someone's else mortgage by renting, [there's] no room to save in turn to get a house or a deposit on a house. Not happening."

"It's disturbing everything, their wellbeing and all, because they can't get by. I think it's ridiculous to be honest what landlords are charging considering a whole lot of them have paid their buildings off over and over again."

Financial pressures - with housing a big part - have wide-ranging effects on people's mental states, she said.

"Separations, domestic violence, alcohol abuse, drug abuse, [they're] stressed, trying to deal with how to get by day by day."

Solo dad Leigh rents a house in Auckland and does not think he will ever be able to buy a house.

"I actually think it's criminal now. I think it's got to a point where it's ridiculous. I find it really unjust, and that's why I use the word criminal because I think it's actually got to that point," he said.

"I think governments are supposed to defend and make sure people have some of the basic things, and surely housing is a basic right." 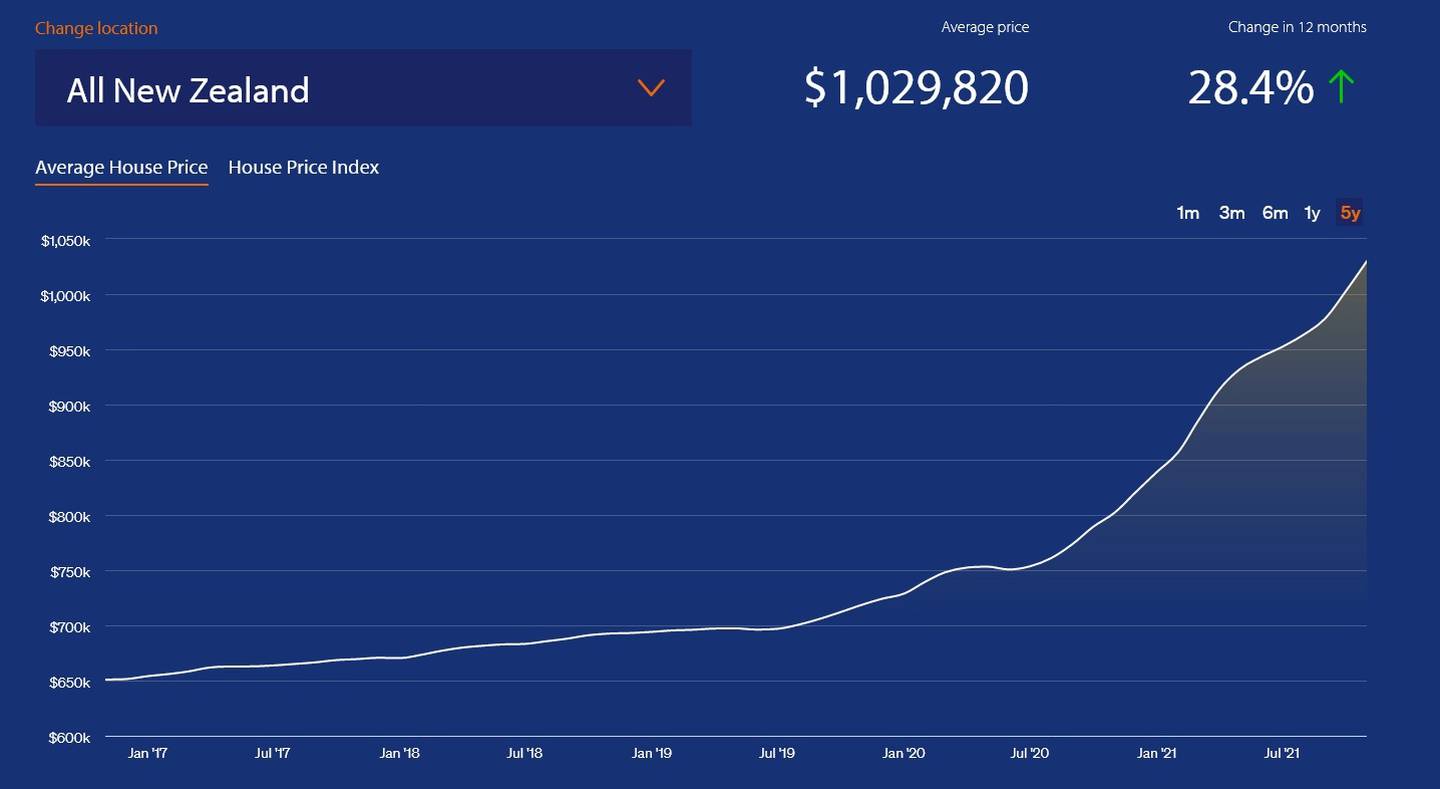 A graph of the QV House Price Index over five years. (Photo / QV)

Evan is trying to save for a deposit with a partner and young child.

"As fast as you save it, the prices go up and the deposit [goes] up, so without some kind of help - I guess if you have parents that can help you, great, but if you don't have that kind of help, it's starting to look like a monumental task."

Since January this year, when Prime Minister Jacinda Ardern said house price growth was "unsustainable", they have gone up 22.7 per cent.

And it is not just urban areas or Auckland and Wellington skewing the figures.

Ardern said they were still unsustainable, but she hoped that would change soon.

"We see first home buyers, having made up 22 per cent of the market, now making up 26. And we see record consents. All of that should contribute, alongside of course the decisions of the Reserve Bank, to us seeing change in the market. That's what we're all working towards."

Green Party MP for central Auckland Chlöe Swarbrick said it was clear the government did not have any intention of meaningfully fixing this.

"With the effective political guarantee of what the prime minister and minister of finance call 'sustained moderation' - that is continual growth in the price of these assets - we are not going to deal with this problem." While there was no silver bullet, Swarbrick said New Zealand needed a "seismic shift" in how we see housing, including actually taxing wealth and capital gains.

"It's looking at things that are completely uncontroversial in other democracies and jurisdictions: the likes of rental warrant of fitness, landlord registers, property manager regulations and rent controls. That is a suite of tools that could really do something here."

He was asked if he thought house prices should come down.

"There might be a period as you go through, a period of time you might see a dip in property prices," Luxon said.

"Over the long run what we want to see is stable, consistent growth in property prices, not the crazy out of control that we're seeing today.

"But it's happening because we have got a supply side problem, where we're frankly not consenting building houses or intensifying our cities sufficiently."

"There is far too much of a skew to those who currently own homes, and not anywhere near enough recognition of the fact that Aotearoa New Zealand signed up to housing as a human right at the United Nations," Swarbrick said.

"Right now, housing in Aotearoa is effectively a runaway gravy train that 1.4 million New Zealanders cannot afford a ticket on, and it continues to get further and further away from their grasp every other day."