Apple has become the world's first company to be valued at US$3 trillion as Wall Street bet that the iPhone juggernaut's record run during the pandemic would carry on.

Shares climbed by up to 3 per cent on the first trading day of the new year to send the company's market value past the milestone.

It crossed the threshold less than four years after becoming the first publicly-listed trillion-dollar company, and just 16 months after hitting the US$2 trillion mark.

Apple lost its status as the world's most valuable company to its old enemy Microsoft as recently as October. It has now surged beyond the software company, whose value yesterday was US$2.5 trillion.

Investors are betting that Apple will continue to defy warnings that it is over-reliant on slowing sales of the iPhone, its most popular product, with new ventures into virtual reality and cars.

Daniel Ives, an analyst at Wedbush Securities, described it as a "watershed moment" for the company and other players in Big Tech, defying fears that global inflation will put the brakes on surging stock markets.

He said: "Hitting US$3 trillion is another historical moment for Apple as the company continues to prove the doubters wrong with the renaissance of growth story playing out in Cupertino."

The milestone will be seen as another victory for Apple chief executive Tim Cook, who was doubted when first taking over from Steve Jobs 11 years ago but has since presided over an increase in its share price of more than 1,200 per cent.

Apple is expected to report record sales for the Christmas period when it unveils quarterly results in the coming weeks, driven by the success of its latest iPhone 13 models and digital services businesses such as the App Store.

Analysts have upgraded expectations for the company in recent weeks due to excitement about new products. Apple has long been working on virtual reality and augmented reality headsets, which may be unveiled this year, and rumours about the company entering the car market have increased in the last year.

Sales of VR headsets have been slow but advocates believe Apple entering the market would finally bring the technology mainstream.

Meanwhile, the company is expected to unveil a more substantial design overhaul to the iPhone this year in a move that typically drives up sales.

Shares in Apple, Amazon, Google, Facebook and Microsoft have outpaced the wider stock market since the start of the pandemic as consumers and businesses became increasingly dependent on their services and devices during lockdowns. 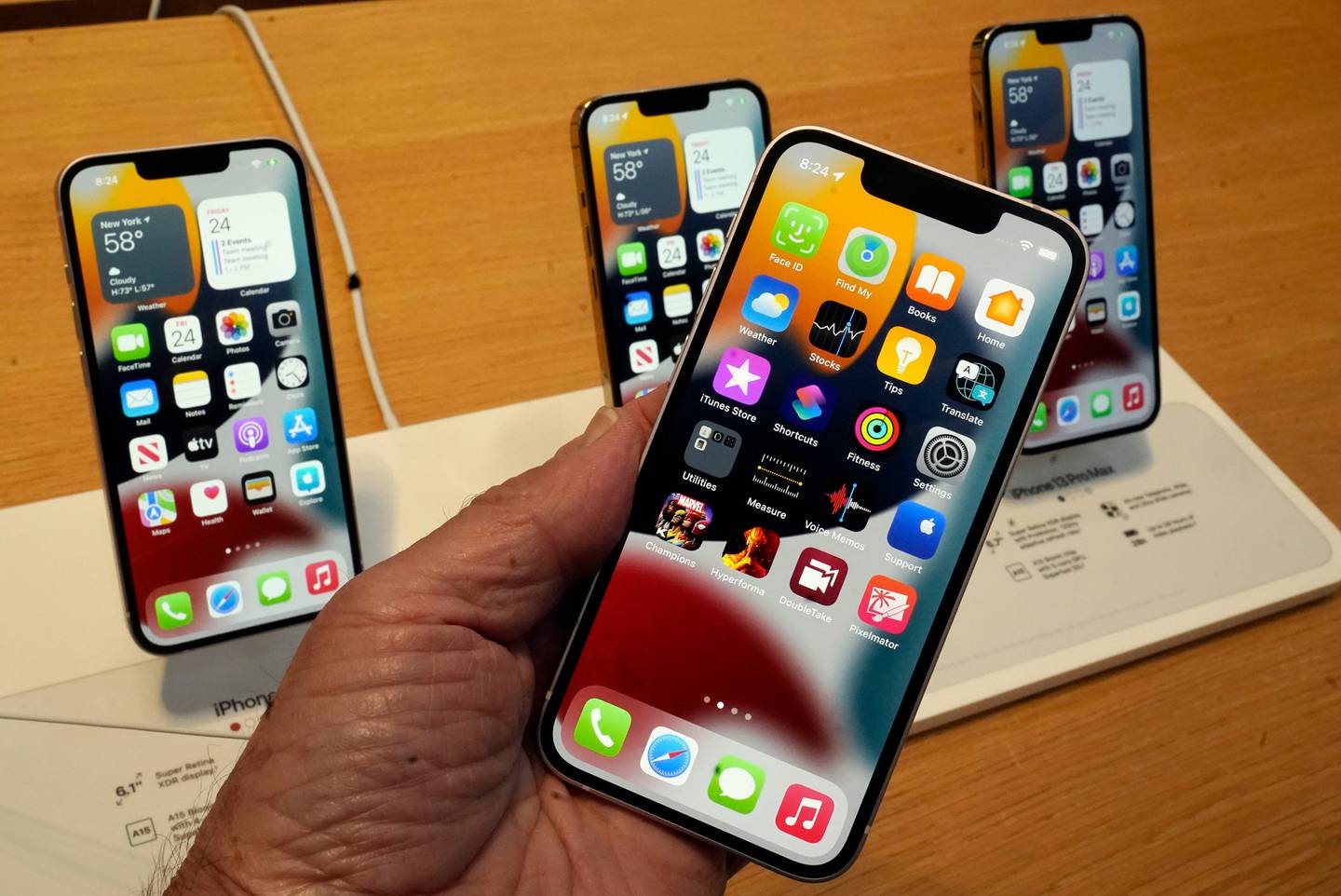 Investors are betting that Apple will continue to defy warnings that it is over-reliant on slowing sales of the iPhone. Photo / Richard Drew

The companies' valuations have also shrugged off growing pressure from competition regulators, which have led to US lawsuits against Amazon, Google and Facebook. All five companies are also facing investigations in the UK from the Competition and Markets Authority.

At Tesla, which crossed the US$1 trillion-mark last year, shares rose by 12.2 per cent on Monday as Wall Street responded to record delivery numbers.

Tesla said on Sunday night that it had delivered 308,600 cars in the fourth quarter of the year, meaning full-year sales had climbed by 87 per cent to 936,000.

The figures were well ahead of forecasts and showed Tesla shrugging off a microchip shortage which has hit much of the car industry.

Sales are now predicted to surge by more than 50 per cent this year. Analysts at Deutsche Bank said they expect Elon Musk's company to produce around 1.5m cars in 2022 as new factories in Berlin and Texas come online.

Tesla's rise on Monday brought its share price close to record levels and added to the fortune of Mr Musk, its chief executive and the world's richest man. Musk has a net worth of around US$270 billion.