FLOODING LATEST:
• 50 homes were evacuated after a massive storm hit Auckland, houses have been flooded and cars swept away
• 'I've never seen anything like this': Incredible photos show extent of West Auckland flooding
• West Auckland's Kumeu, Huapai, Ranui, Piha and Henderson Valley appear the worst hit as Civil Defence assess the damage
• Kumeu copped 208.2mm of rain in 14 hours - the area's second wettest day since records began in 1943.
• Heavy rain warning is in place until 4pm, with more rain expected to hit

A family with a young baby had to be rescued from their property near Kumeū on an inflatable rescue boat after the deluge overnight.

Water was lapping at the ranch sliders at Hayley and Dylan's single-level property, and they had been left without electricity or drinking water.

Local resident Briar Dunn told the Herald said she would be picking them up and driving them to the police station before taking them to meet her mother, who was parked on the other side of the floodwaters and couldn't get through.

Dunn's mother would then drive them to their own parents' home.

"They pin dropped me their address because you couldn't see their mailbox," said Dunn.

Dunn and her family had offered up their help with rescue efforts, using their vehicles and jet skis. Their house wasn't affected but their farm was.

"We're flooded ourselves. We live on a farm just out of town and we're underwater but I can't do anything until the water recedes so there's no point in me panicking.

"We're just out there doing whatever we can." 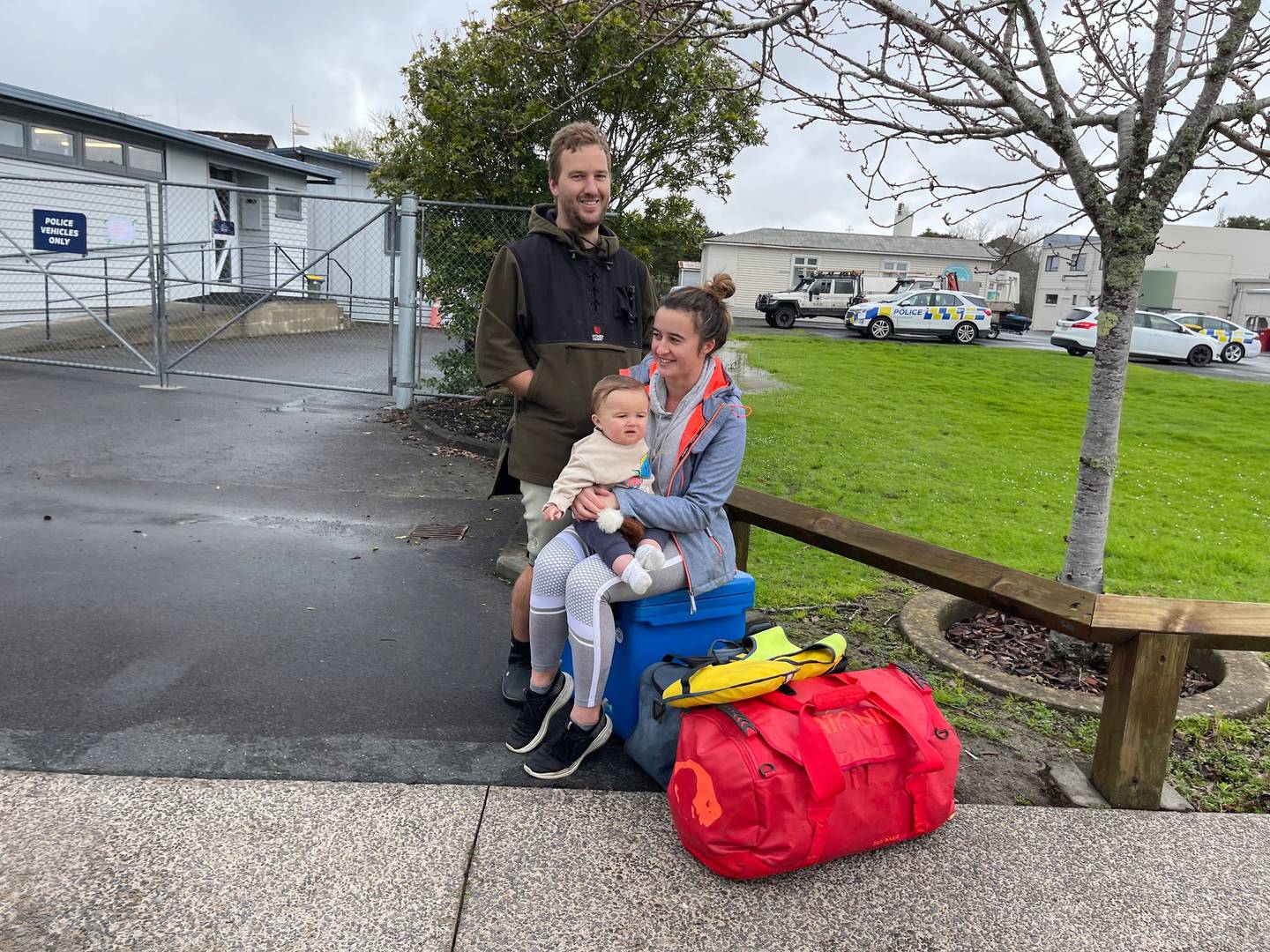 Hayley, Dylan and their baby were rescued by local resident Briar Dunn as water was lapping at their doors. Photo / Supplied

Meawhile other west Auckland residents have fled raging floodwaters with their animals, risking their own safety to keep their pets and livestock alive.

More than 50 homes in West Auckland have been evacuated by emergency services as the region was inundated with rain overnight.

One man has been trapped in the second storey of his home since this morning after swimming his horses up the stairs to safety.

The view from the end of the driveway of the flooded Huapai home. Photo / Facebook

The Huapai man, who lives on Matua Rd, posted to the local Facebook page early this morning saying the family has lost everything.

"We have pushed ourselves to the limit swimming horses in and bringing them up into the second level of our house.

"We lost all of our cars. All of our belongings, everything is gone.

"Thankfully we were able to get the kids taken out by jetski, which is the most important thing."

They had headed out for the last pony who had disappeared. "She is absolutely buggered and barely made it." 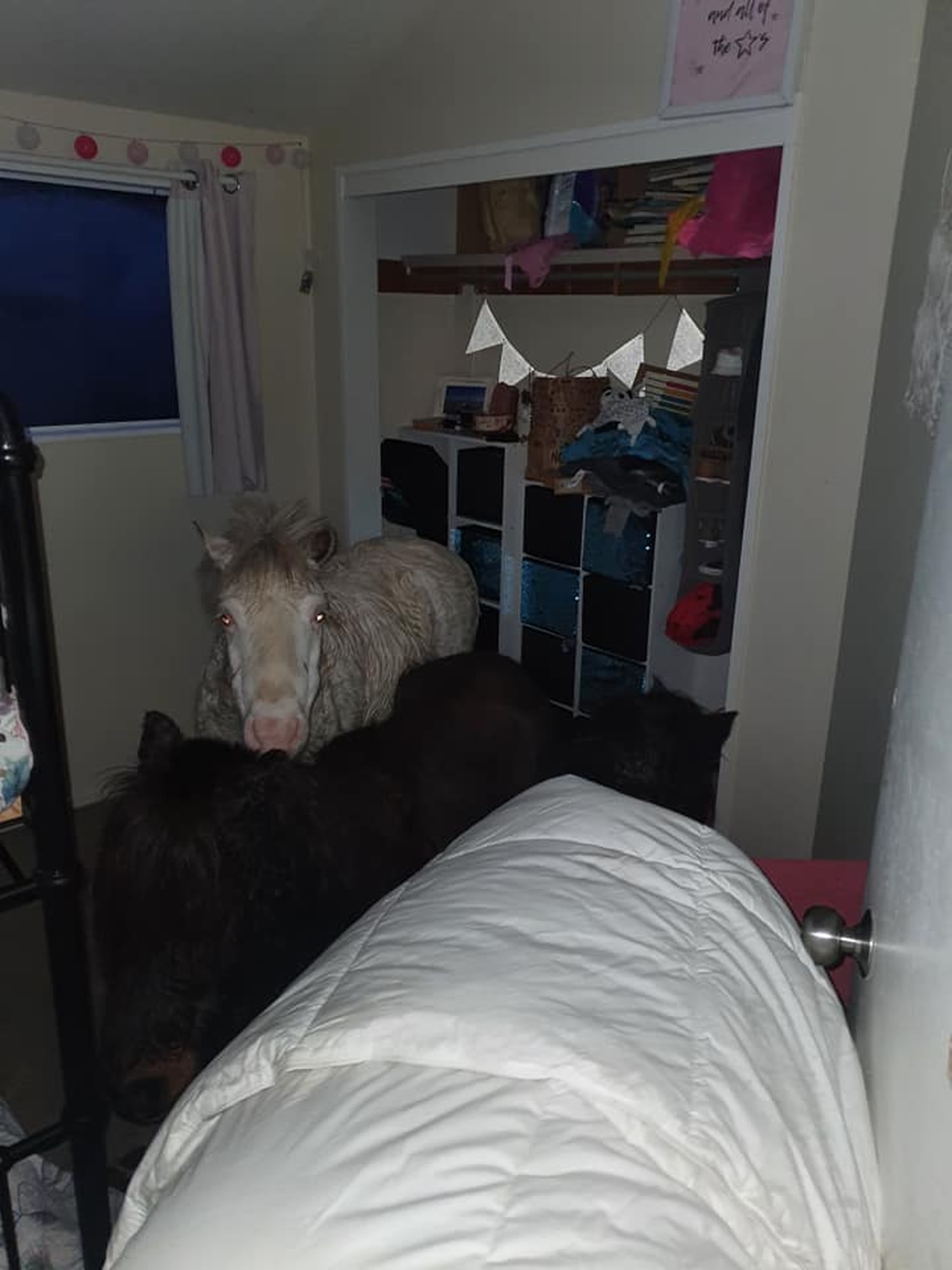 Locals have been bringing hay and horse food to tide over three bedraggled horses stuck upstairs in a Huapai property. Photo / Facebook

Squashed into the top floor with three horses, two dogs and four puppies, he pleaded with anyone who had spare hay or dog food to bring it over.

And the community responded, with dozens of people offering food and transport as well as power banks for his dying phone.

He has thanked the community for their help, saying they were "amazing". The puppies have since been transported to safety but the man remains in his home and is still working out how to get the horses out, with the heavy rain set to continue into the afternoon.

They will also need to find somewhere to live with land for the horses. 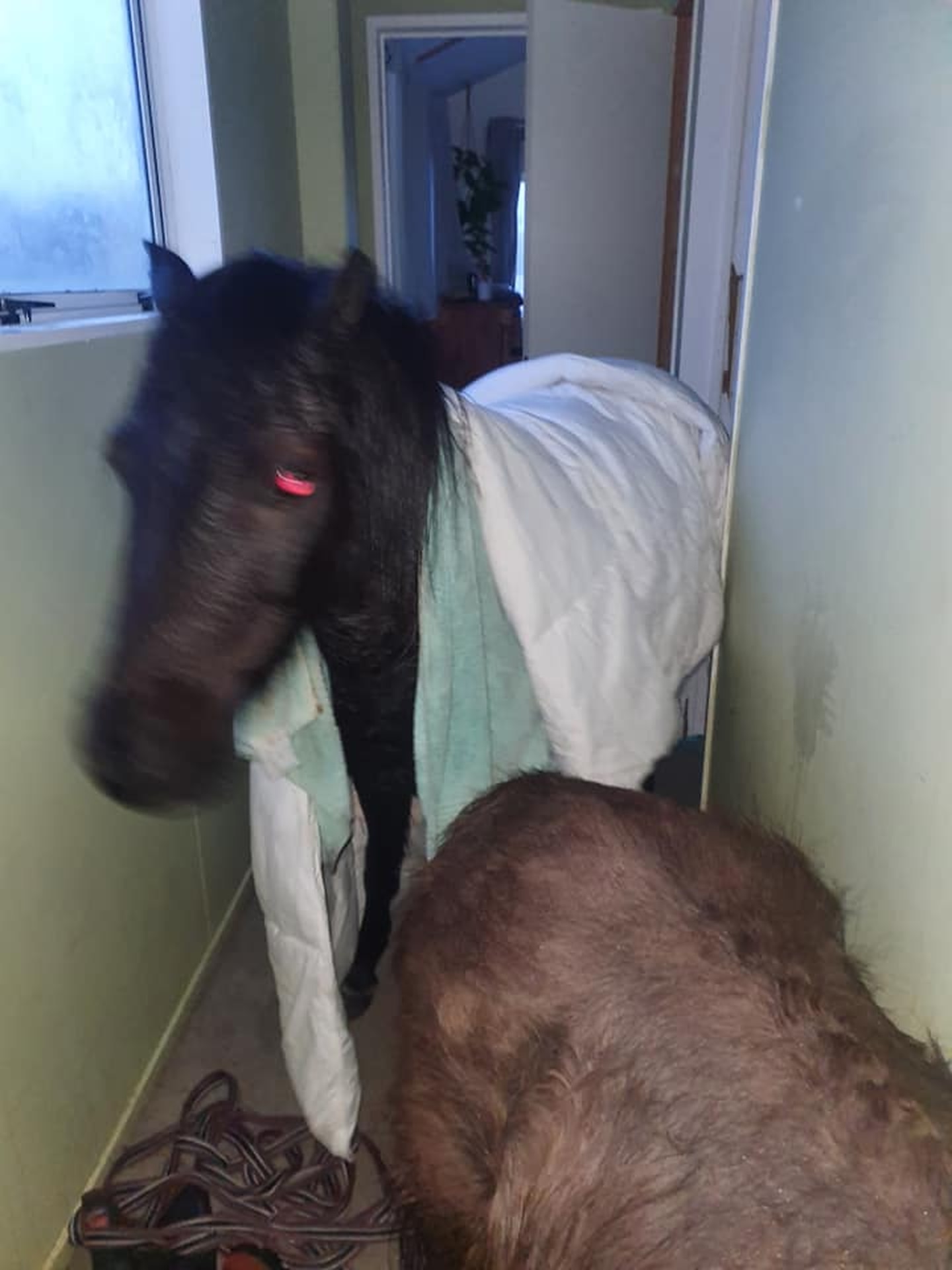 A Huapai resident has rescued his horses, swimming them upstairs to safety as the bottom floor is flooded. Photo / Facebook

Daniel Bott lives five minutes away on Rheingold Place, next to a floodplain reserve that borders the Kumeū River.

The bottom floor of his house is flooded to the top of the stairs and he's looking at water outside his window. 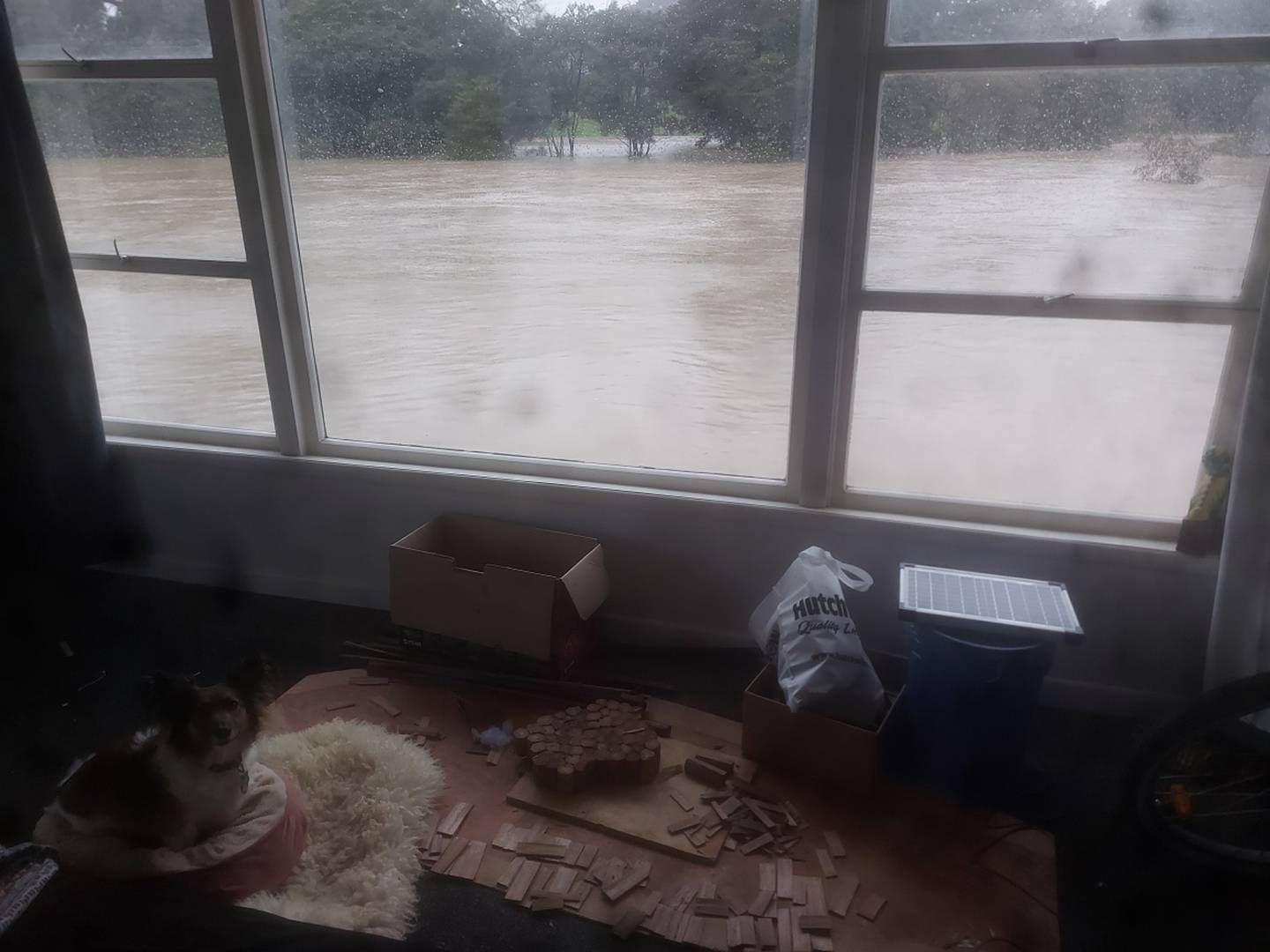 Daniel Bott and his dog Missy are stuck in the top floor of his two-storey house, near the Kumeu River, with water close to the windows. Photo / Supplied

Bott had alerted the fire service earlier to give them a head count - it's just him and his dog Missy inside. His phone is now running out of battery.

"My paddleboard's trapped under the stairs. I'll have to wait, it's going into a sketchy torrent of water - there's logs floating around. Logs and bloody furniture, bits of cars."

His van has floated away. "All my downstairs is a writeoff. Lawnmowers and motorbikes are all gone.

He was tempted to jump in the water and swim to safety but said it was too cold.

"I've gotta wait for the water to subside so I can paddle board out of here." 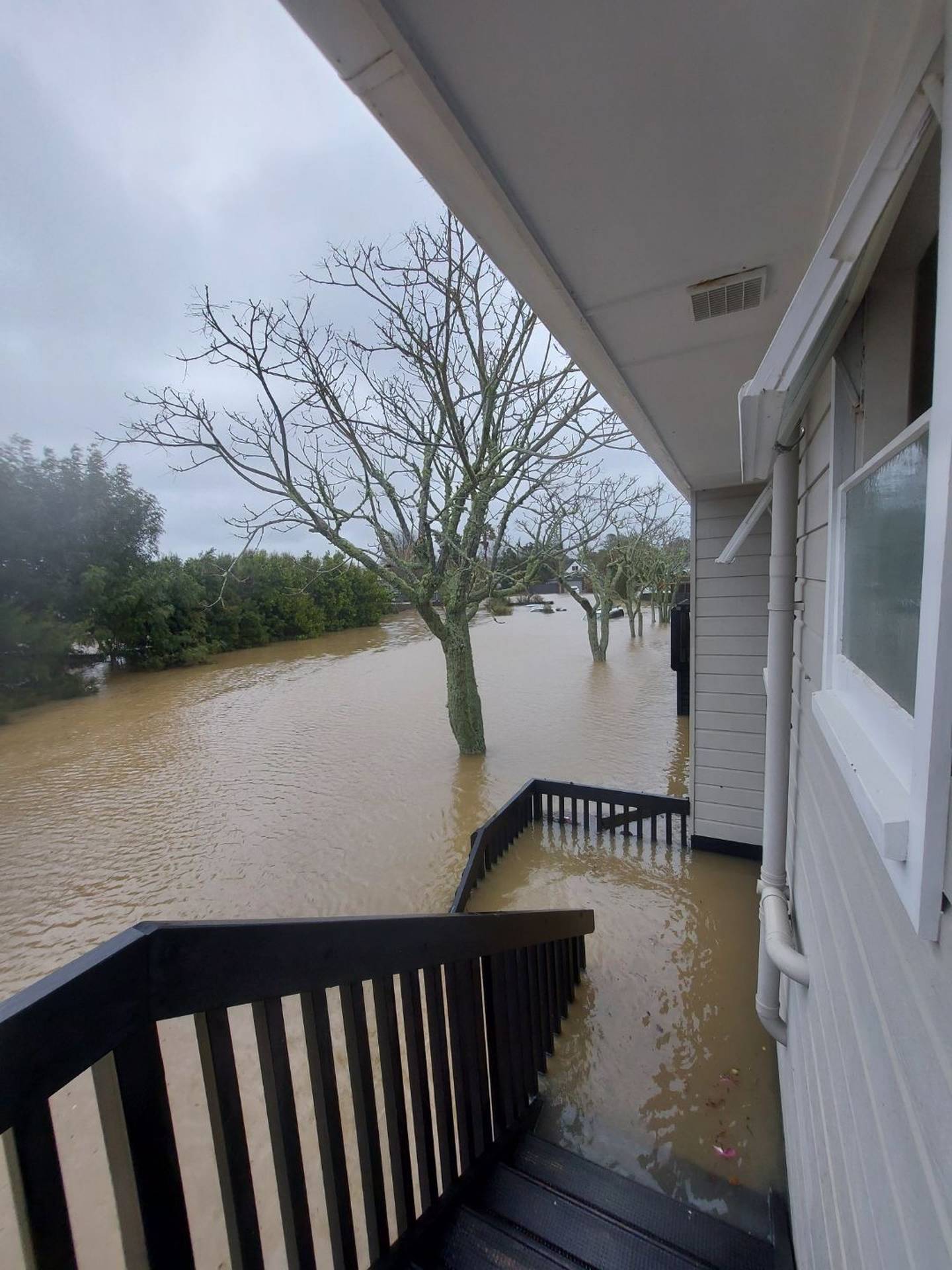 Almost everything Daniel Bott owns is underwater. Earlier this morning he watched his van float past. Photo / Supplied

Daniel's sister Lesa van Bott said her brother's lawn has a 20ft drop to absorb floodwaters and stop them from reaching the house - but it hasn't worked.

"It's horrendous really. We can't get in to him because the bridge is flooded - even our 4WD can't get through."

Daniel was running on adrenaline, she said.

People in the area with boats are heading out to rescue others and help their animals.

"That's one of the things we love about here - Riverhead, Kumeū, Huapai - we band together. People are organising clothing, duvets, bedding, food and everything," she said. 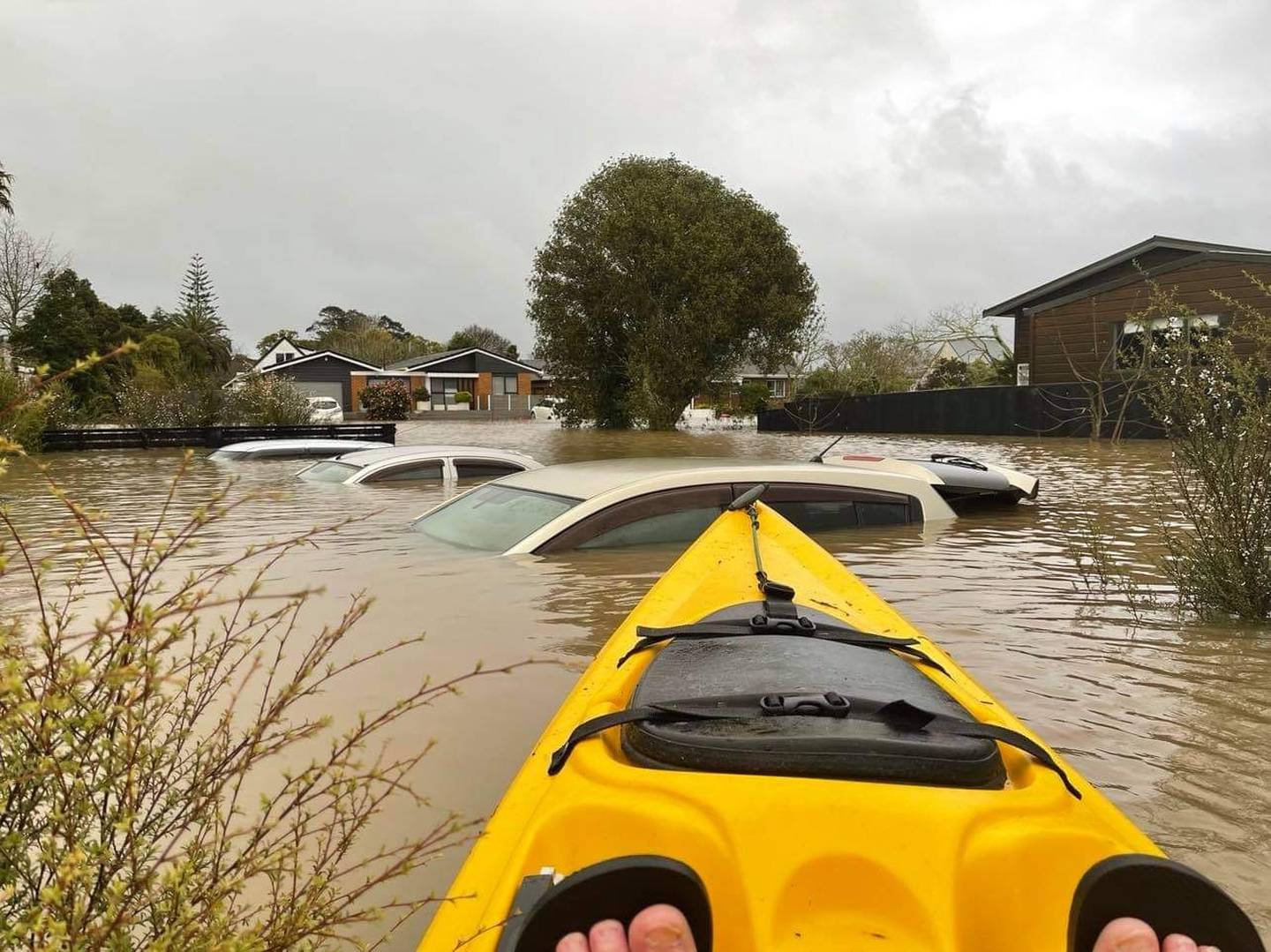 A Huapai local sets out to assess the damage on Rheingold Place, close to Kumeu River. Photo / Supplied

Van Bott is in Riverhead where there's extensive flooding, with low-lying subdivisions flooded and the Riverhead Bridge underwater. A brand new subdivision in Duke St and a fairly new development in Crabb Fields Lane are both flooded.

More than 150 calls about flooding had come in to the fire service by 5am.

A witness told the Herald numerous homes were flooded in and around Birdwood Rd in Swanson and cars were being swept down the road.

"Houses are underwater, cars are flooded and kids are being plucked from their homes in their pyjamas."

The witness said emergency services were out trying to help people and it's understood at least one home was at risk of collapsing.

Firefighters have resorted to using jet skis to reach trapped motorists as Kumeū township on the Twin Coast Highway is inundated.

Surf Life Saving Northern Region search and rescue supervisor John-Michael Swannix said about 9.10am the Muriwai squad was helping to rescue a woman and two children trapped in water at a Kumeū property.

Many of those rescued have been saved by local residents, who've heroically headed out in kayaks, boats and jetskis to get their neighbours to safety.