Aucklanders travelling south should expect delays as tractors and utes congest traffic after a protest in the city centre.

A serious crash has closed also the northbound lane at Mangere's Coronation Rd and an incident involving a truck losing its bin near Mercer has delayed southbound travellers.

Waka Kotahi, New Zealand's Transport Agency, said traffic was "very heavy" on the southern motorway at 2pm and advised motorists to delay their journey or consider using State Highway 20 as an alternative route to Manukau.

At 2.30pm, Waka Kotahi confirmed southbound traffic was still moving slow from the city centre to Papakura. Motorists were advised to allow extra time for their journey.

The most recent update said most of the slower vehicles were clear of motorways but traffic was still slow.

The Howl of a Protest event, organised by Groundswell New Zealand, has seen thousands of farm vehicles rumbling through cities in protest against what farmers say is increasing interference from the Government, unworkable regulations and unjustified costs.

The protests are taking place in 55 cities starting from Kaitaia to Southland. 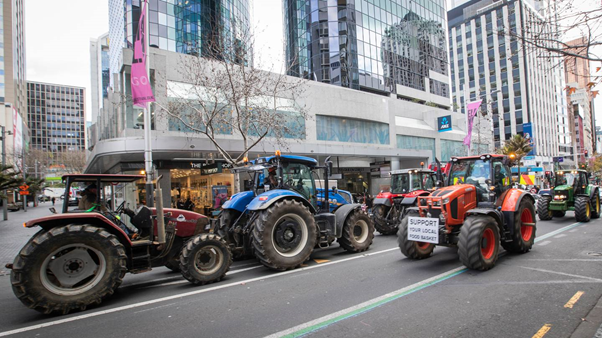 Hundreds of farmers have hit Auckland CBD after taking to the Southern Motorway in tractors, heavy farm equipment and utes to participate in the protest.

SH20 CORONATION RD ON-RAMP CLOSED - 2:55PM
Due to a serious crash the on-ramp from Coronation Rd to SH20 Northbound is currently closed. Please follow the diversion to Rimu Rd for access to SH20 northbound. ^TP https://t.co/LfFxXJwphg

The area around Drury and Ramarama was gridlocked at 9.30am as the convoy made its way to the motorway. It appeared motorists would face similar delays heading south this afternoon.

Elsewhere, NZTA warned commuters that the on-ramp from Coronation Rd to SH20 northbound in Māngere is currently closed after a serious crash.

Further south, a truck has reportedly lost its bin near Mercer, causing kilometres of backed up traffic heading south.

Meanwhile, SH1 between Oteha Valley Rd and Silverdale will be closed between 9pm-5am for maintenance in three four-day periods.

They would be from July 18-21, August 1-4 and August 9-12. The maintenance was weather dependent and could be rescheduled for late July and early September.

A detour along Dairy Flat Highway would be available. The BP Service Station at Dairy Flat and other shops on SH1 will be closed.