One person is dead and another injured after a tornado ripped through a Ports of Auckland shipping container yard in South Auckland this morning.

Dozens of stacked shipping containers collapsed on Wiri Station Rd, Wiri, when a tornado hit the area around 8.30am.

It is understood the fallen shipping containers may not be directly responsible for the death.

Speaking in Papatoetoe this afternoon, Auckland Mayor Phil Goff said he had been informed the Wiri yard worker's death was a result of the person being picked up and thrown in the air.

"I want to be careful about that [cause of death]. I've had conversations about it," Goff said.

"I understand that the person's fatal injuries were caused literally by the person being thrown at a distance and hitting a solid object.

"It's really sad and our thoughts are with all of those that worked with and were family to and friends of the person that was killed."

Goff said he understood the deceased worker was a contractor not employed directly for Ports of Auckland.

"I've talked to Ports of Auckland, they said that the force of the wind was so strong that 30-tonne containers were being picked up and blown about in the air," Goff said.

"There were two people injured. I understand those injuries are not life threatening and we welcome that.

"I know one of the other injuries was inflicted on a person that was a truck driver on the site. But as I said before I think that those are non-fatal injuries."

Another injured person was treated at the scene and taken to Middlemore Hospital in a moderate condition.

WorkSafe have been notified and police say they are also making inquiries into the incident. Fire and Emergency also confirmed they attended the scene.

Ports of Auckland spokesman Matt Ball says the damage is widespread in the yard and dozens of containers have toppled over.

One container weighing 30 tonnes was lifted by the wind. Signs from the neighbouring motorway were also blown onto the site.

"We're very shocked by what is a horrendous freak event and our thoughts are with the family and friends of the people who've been affected," Ball said.

"This will be difficult for our staff. They're not just affected by what's happened at work, many of them also live in the area.

"We're providing as much support as we can for our people to help them through this."

The recovery job at the site will also be difficult, Ball said.

"There's a lot of damage in terms of containers and things like that lying around, so we'll get specialist help to get that back up and running. There is a mixture of full and empty containers on the site."

Ports of Auckland issued a statement explaining its South Auckland freight hub was hit by the tornado.

"The tornado caused significant damage to the site and dislodged multiple containers.

"We are shocked by this freak event and our thoughts are with the people affected."

One witness said: "It was carnage through the rail yard. They were all staged out the front of the yard.

"Workers were standing around looking quite distraught. There were three ambulances and a specialist response team, multiple police.

"One person has been removed by ambulance from the scene I've seen. They were working on someone in the back of the ambulance. Multiple containers had been blown over." 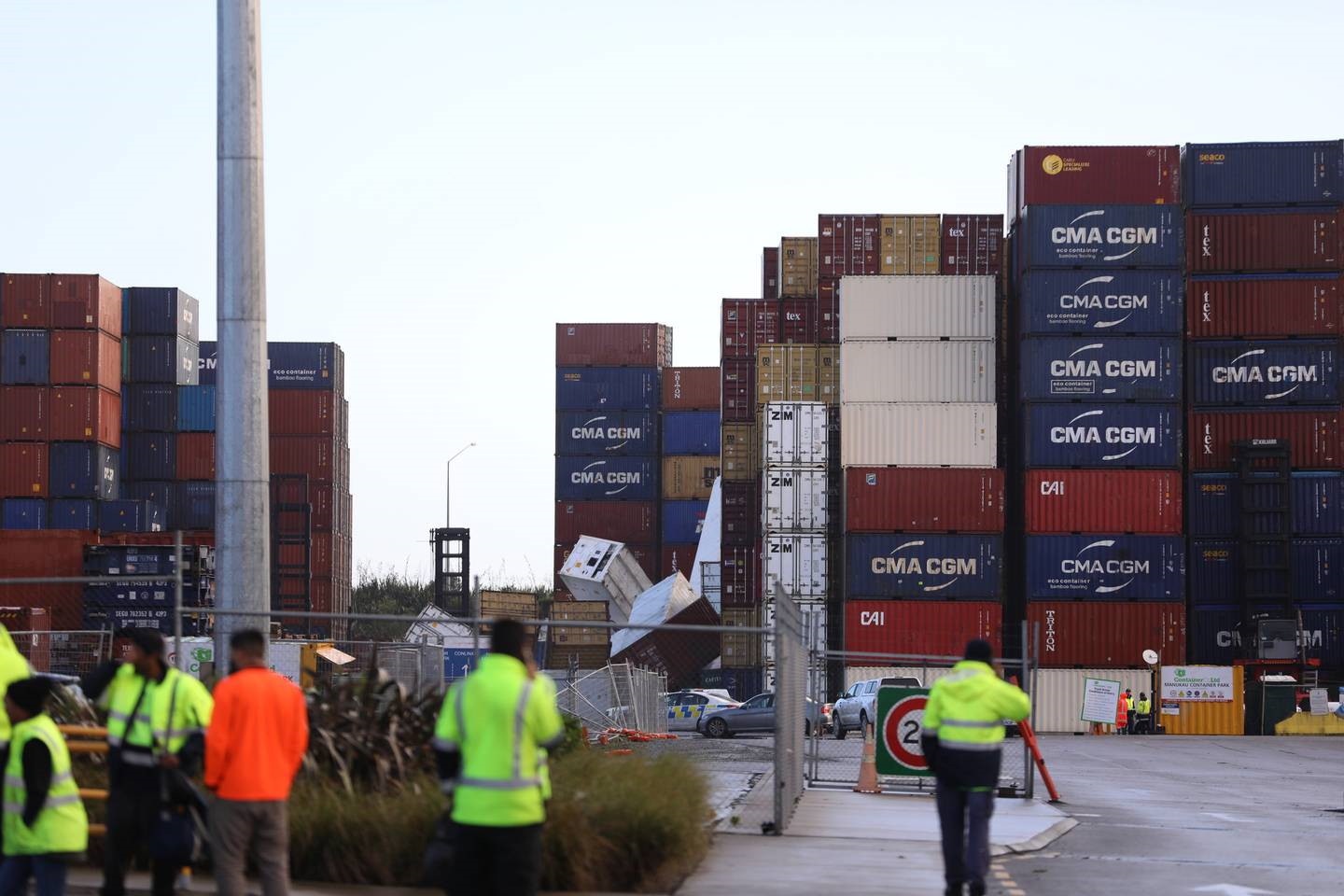 A witness at the scene said multiple containers have toppled and it was understood they had fallen on a worker. (Photo / Hayden Woodward)