The Government is contributing $100,000 to a Mayoral Relief Fund to support Auckland communities impacted by the Papatoetoe tornado, Acting Minister for Emergency Management Kris Faafoi says.

The financial help comes as Auckland Emergency Management, together with emergency response agencies and teams from Auckland Council, are today continuing to support people affected by yesterday's tornado and focus on clean-up efforts.

One person is dead, one injured and residents of more than 1200 mostly Papatoetoe homes - 60 of which are now uninhabitable - have been left picking up the pieces after an ordinary Saturday morning turned to terror when a tornado ripped through South Auckland.

It was just before 8.30am when the tornado struck, in a matter of seconds tearing off roofs and garage doors, uprooting trees, smashing windows, toppling a truck and power poles - some on to cars - and leaving stunned residents cowering and praying in their homes from Manurewa to Papatoetoe.

They estimated more than 1200 homes had been affected by the tornado, with the majority without power.

"My heart goes out to the family and friends who have lost a loved one, and to those who have been injured. I know this been a distressing weekend for people in Auckland, with many lives disrupted, and many homes and businesses damaged," Faafoi said.

"While it's too early to know the full cost of the damage, this initial contribution will help those communities start to get back on their feet.

"We will stay in contact with Auckland Council, which is contributing a similar amount to the fund, to see what further assistance may be needed as site assessments are completed in the coming days," he said.

Mayoral Relief Funds provide an additional way to help communities bounce back after an emergency. Local communities and councils are well-placed to know exactly what they need so this funding can be used, for example, to meet the needs of affected families and individuals, community organisations or marae. The funds will be provided to the Auckland City Council Mayoral Relief Fund to be disbursed across the region.

"This funding is in addition to other support that people may be eligible for through the Ministry of Social Development," Faafoi said.

"I'd like to recognise the extraordinary efforts of emergency management staff, first responders, volunteers, businesses, community leaders and residents who have also provided support.

"There is still a recovery effort ahead for this impacted community. They should know the Government will be standing alongside them," the minister said. 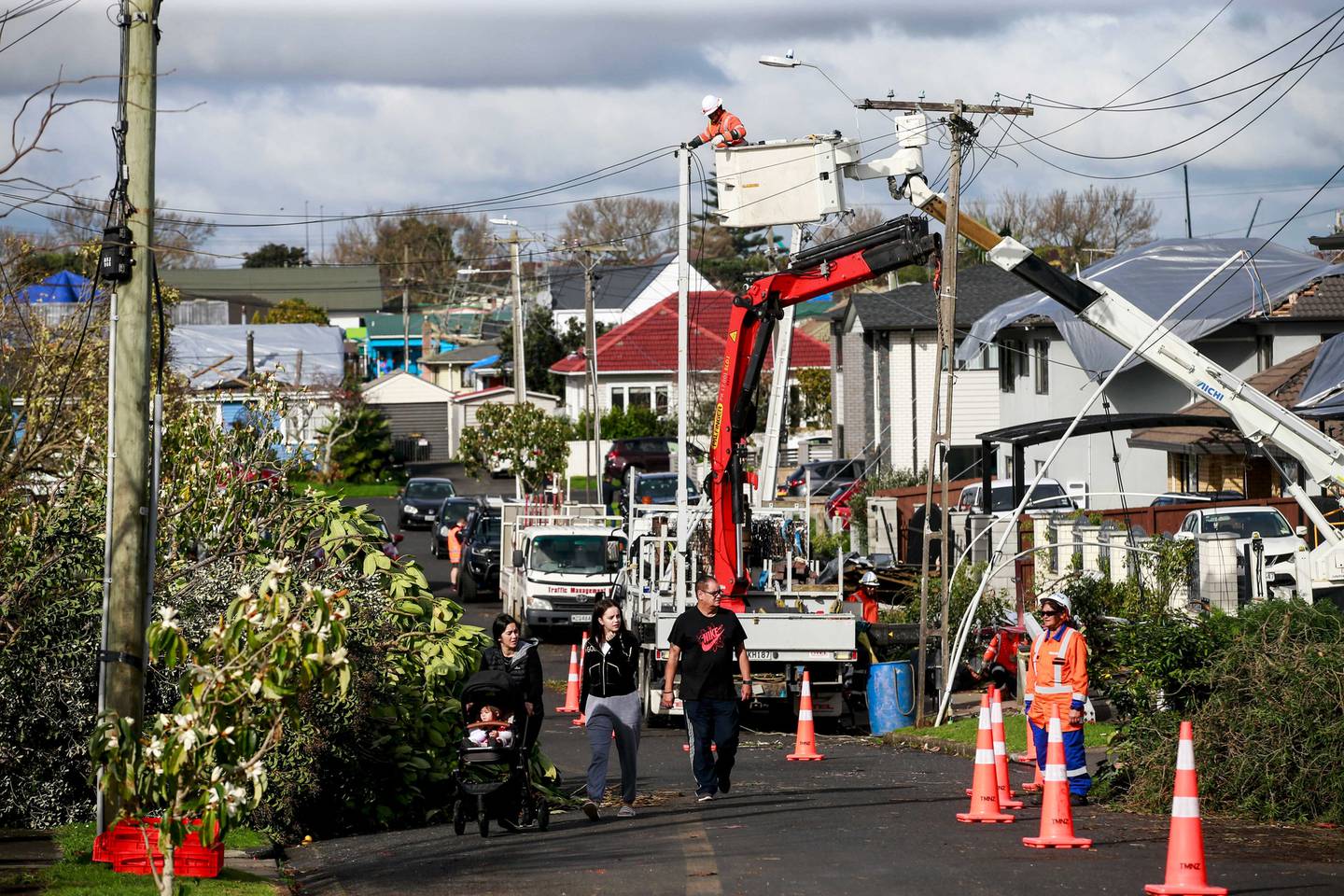 Vector personnel repair damage to powerlines on Hayward Rd sustained in the tornado that ripped through Papatoetoe. Photo / Alex Burton

Death at Ports of Auckland

At a Ports of Auckland yard on Wiri Station Rd, dozens of stacked shipping containers collapsed as the powerful funnel of spinning air crossed Wiri, with at least one container weighing 30 tonnes tossed into the air.

A contractor not employed directly for the Auckland Council-owned port company was killed and a truck driver on site injured but it's understood the fallen shipping containers may not be directly responsible for the death.

Auckland mayor Phil Goff said he'd been told someone at the yard died after the force of the wind threw them some distance in the air and they then struck a solid object.

"I want to be careful about that [cause of death]. I've had conversations about it … I've talked to Ports of Auckland, they said the force of the wind was so strong that 30-tonne containers were being picked up and blown about in the air."

A person at the yard described the scene as "carnage", with distraught workers watching as three ambulances, a specialist response team and multiple police officers rushed to help, with someone being "worked on" in the back of an ambulance.

As well as toppled containers, including the 30-tonne one lifted by the wind, signs from the neighbouring motorway were also blown onto the site, Ports of Auckland spokesman Matt Ball said.

Since the tornado was localised and brief, and because it didn't cross paths with any wind gauges, wind speeds weren't known, MetService forecaster Gerard Bellam said.

The rain gauge at Auckland Airport in Mangere recorded 25mm in the hour to 9am yesterday, with the downpours "a good indication of the amount of energy that was around", Bellam said.