Queues of cars are snaking out from Covid-19 testing sites as Aucklanders do their part to help track down any signs of community transmission of the virus.

However, multiple people were reporting long delays at testing sites, with one person saying they had been in line for two hours at the new pop-up testing site in New Lynn.

Another Facebook user on a Mt Albert community page suggested a traffic jam was stretching 2km along New North Rd from the testing station in Eden Terrace all the way to Morningside.

One Herald reader said they had been in the line for the Eden Terrace testing station and that more than four-and-a-half hours later they were "still ages away behind a big line, can't see where it ends".

One man caught in traffic on Druces Rd near the Wiri testing station said he was just 70m from his workplace but couldn't move because of the jam. He said he had been waiting one-and-a-half hours in the traffic.

Police said traffic jams were also clogging up College Rd in Northcote and at the corner of Edsel St and Catherine St as a result of those visiting Covid-19 testing sites at the two locations. Anyone with symptoms is urged to get a free Covid-19 test.

Motorists were asked to avoid unnecessary travel in the area if possible.

A testing centre in Hamilton also reported being "overwhelmed", and was now turning people away.

The Covid-19 testing site at Claudelands Event Centre had shut its gates and won't be accepting any new patrons today.

It said it hadn't run out of tests, but the wait time for the current queue was up to five hours, with some people saying up to 300 vehicles were waiting.

Hamilton locals could still ring and book an appointment to be tested by designated GPs or an Urgent Care Clinic.

Ardern told the nation that four new cases of community-transmitted Covid-19 had been detected in Auckland, ending the 102-day-streak of no new community cases in New Zealand.

That put health teams in a race against time to track down all cases of Covid-19 in the community in a bid to prevent a devastating second wave of the virus hitting New Zealand.

To help slow the spread of the virus, Ardern also announced Auckland will move to level 3 restrictions from midday today until midnight on Friday.

The rest of the country will move to alert level 2 over the same duration. 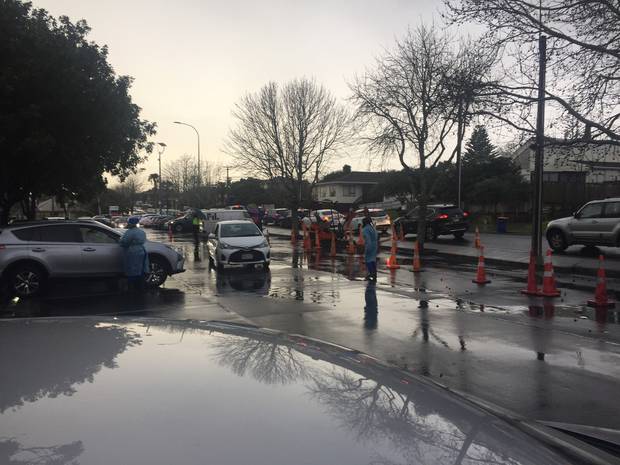 Health teams have thanked all Aucklanders going to get tested but as long queues formed they have asked people to be patient.

Those who should immediately get tested included anyone with symptoms of Covid-19 - such as a new or worsening cough, sore throat, runny nose, fever, temporary loss of smell and difficulty breathing - should be tested.

"This news is of concern, but we expected to see further community cases in Auckland at some point in this pandemic, and we are well prepared.

"We are working closely with the Ministry of Health and other agencies to ensure everything possible is done to contain the spread of Covid-19 in our communities."

"The best defence against Covid-19 is to follow the same actions we took earlier in the pandemic. Maintain good hand hygiene.

"If you are sick, stay home. Keep track of your movements to help us with contact tracing. Maintain physical distancing."

All health services are regarded as essential and should continue as usual, with an additional focus on infection prevention control measures and distancing of patients, she said.

"Hospitals will continue with planned care including clinics and surgery – patients should keep their appointments unless advised otherwise by their specialists.

"The city's hospitals and aged residential care facilities are updating their visitor policies and other protocols to protect the most vulnerable."

Anyone with concerns should seek advice from Healthline 0800 611 116 or call the GP.