An armed person has been shot by police after a vehicle pursuit spanning several suburbs in Auckland this morning.

Police shot the person - who was in possession of a firearm - and have taken another person into custody following a fleeing driver incident that spanned across Ōtahuhu and Hillsborough this morning.

The person shot by police is in a serious condition.

Police said a driver had failed to stop for officers in Ōtāhuhu shortly before 9am.

The car eventually came to a stop on Lilac Grove in Hillsborough, where a person was shot.

A second person from the fleeing vehicle was arrested in Rendcomb Place.

Locals have been told that there is a currently a heightened police presence in the area, including in Carlton St and Frederick St.

Police said they are not seeking anyone else from the vehicle.

One of the city's top-ranked police officers - Detective Inspector Scott Beard - has also arrived at the scene.

Video footage of the pursuit shows a black Holden making a fast right hand turn through an Auckland intersection with traffic banked up at the stop lights.

The car's rear wheels can be seen snaking out during the turn as three police cars follow close behind.

A fourth police car then joins the chase.

At least a dozen other cars driven by members of the public are pulled up at the intersection as the pursuit sweeps through.

A black station wagon has come to a stop haphazardly at the bottom of a dead end street in Rendcomb Place.

A resident in Rendcomb Pl saw police officers arrest a man at the bottom of the dead-end street.

After hearing sirens he came outside this morning to find the front of his house blocked off and armed police officers standing nearby. Two helicopters were circling above.

"I heard something that sounded like firecrackers, it could have been gunshots, three of them," Joseph told the Herald.

Police officers told him two offenders had been arrested and the threat was no longer there.

Joseph saw one man being put into the back of a black police car and a mask put on his face. He sat there for 15 - 20 minutes before more police cars came and they all left together.

A nearby resident said she saw a car being pursued down the road by police followed by the sound of what appeared to be gunshots.

She believed there were two people in the car - both wearing bandannas to cover their faces. 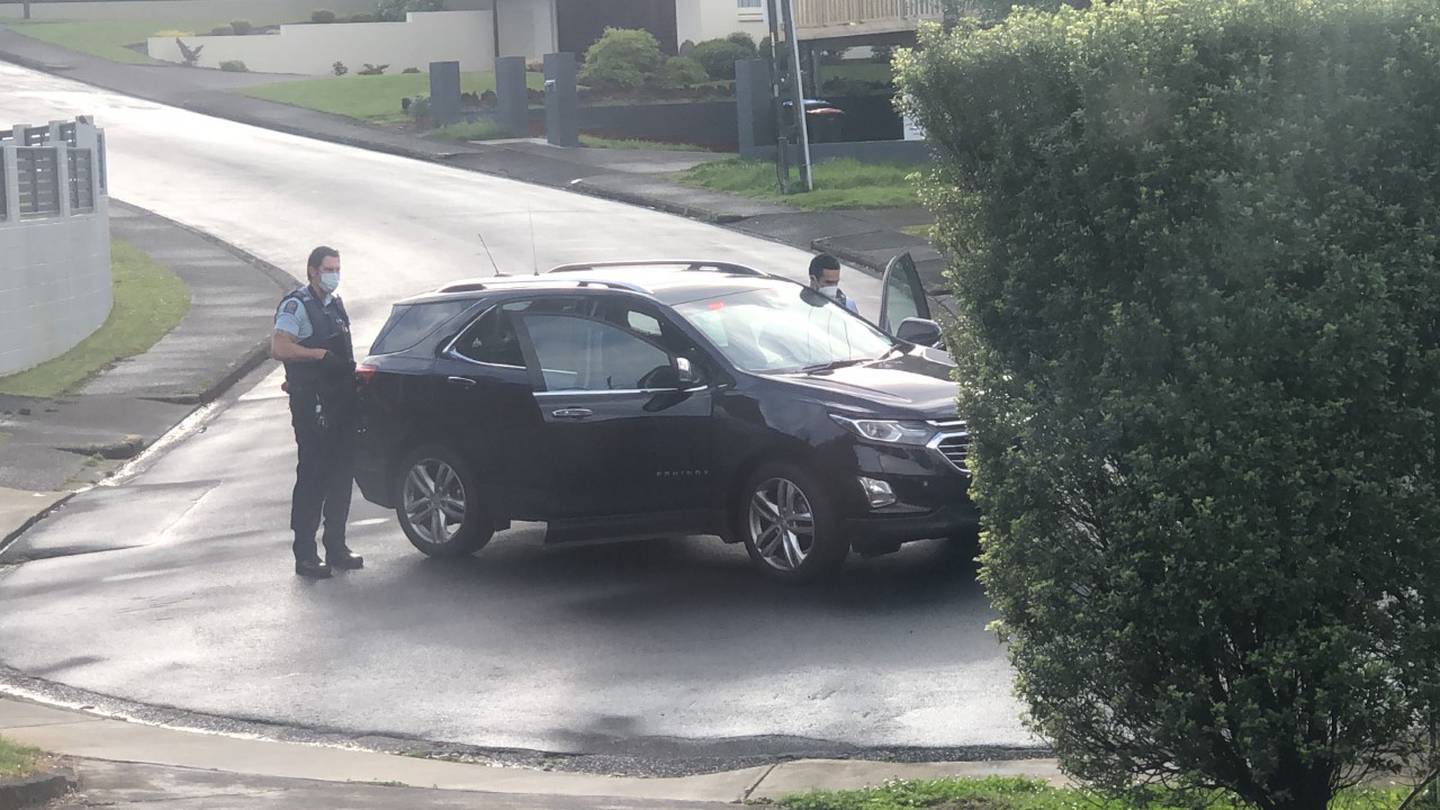 A black stationwagon has come to a stop haphazardly at the bottom of a dead end street in Rendcom Place. Photo / Supplied

A resident in the nearby suburb of Ellerslie said he heard gunshots at about 8.55am followed by sirens and the police helicopter near the intersection of Great South Rd and Rockfield Rd.

Another resident said they heard five gun shots and what sounded like a car chase.

A resident living near the corner of Great South and Rockfield Rds said they heard what sounded like three loud gun shots and a speeding car passing by at about 8.55am.

"It sounded like a car was driving extremely fast, you could hear there was a lot of revving," the man said.

"Then there was heaps of sirens that followed throughout the next five minutes, and then the police helicopter wasn't far behind that either."

The man, who had been working from home at the time, said it sounded like a police pursuit. 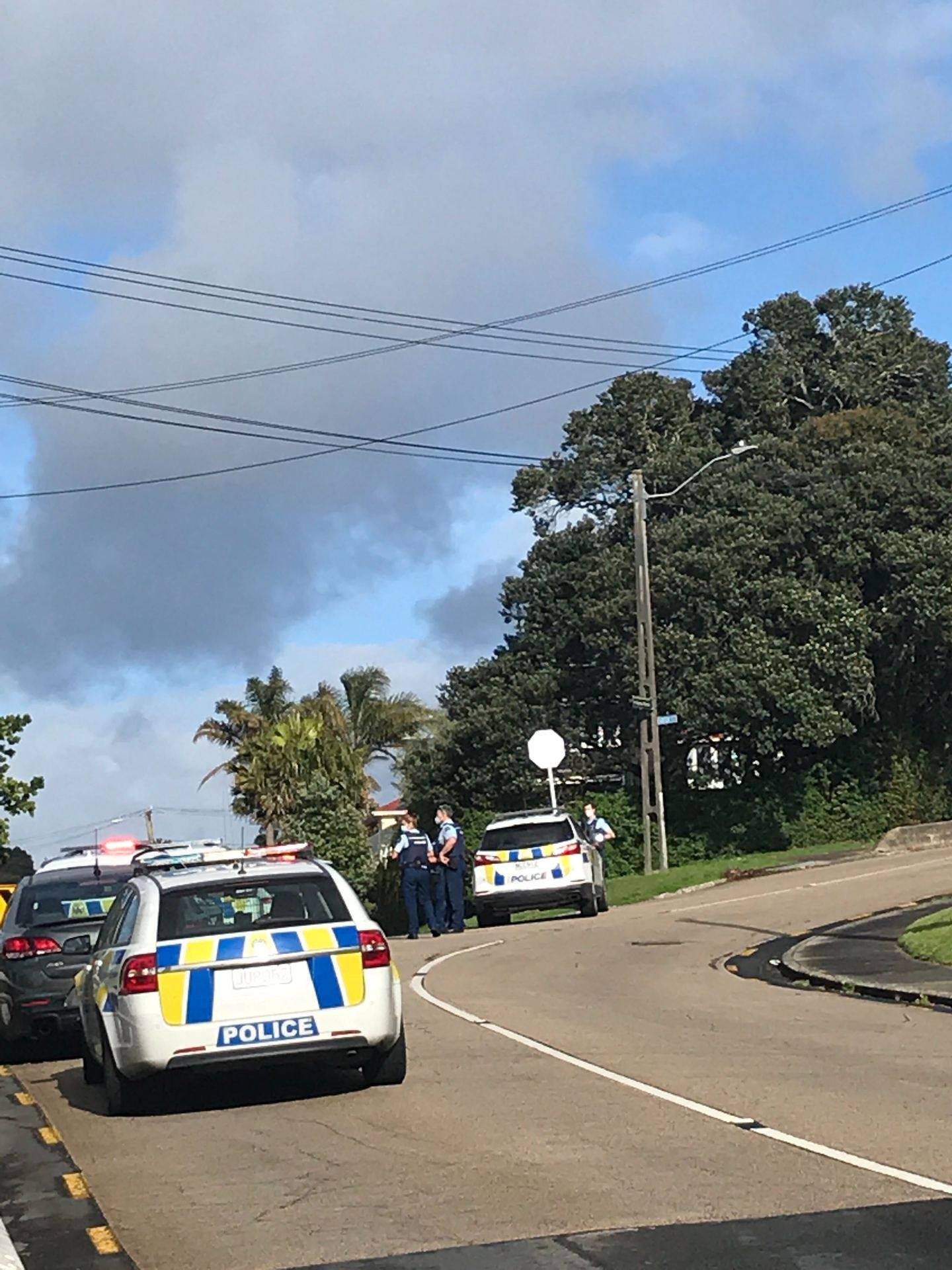 Police can be seen gathering in the Auckland suburb of Hillsborough.