A man is dead after falling from a moving vehicle on Auckland's Southern Motorway.

All city-bound lanes were closed for more than two hours, causing lengthy traffic delays, after the incident near Ellerslie.

The police Eagle helicopter had to twice land in the middle of the motorway to provide immediate first aid but the male patient died at the scene.

The motorway re-opened to citybound traffic just after 1.30pm. Police said all four northbound lanes between the Ellerslie-Panmure Highway on-ramp and the Greenlane East off-ramp were now open. Northbound traffic was still backed up to Mt Wellington.

The view from the other side of the incident. Photo / Vinesh Haribhai

"Traffic is also slow southbound due to rubberneckers," police said.

A witness said she saw a man fall from a white van that was travelling at 100km/h in the far right lane at 11.15am.

The woman, who was in the second car behind the van, said all of the cars behind it came to a sudden stop.

"I have no idea how that happened. It was unbelievable how the man didn't get run over by the truck that was on the left lane as it happened so suddenly."

Witnesses say drivers are reversing down the motorway to try to avoid the crash scene, with delays stretching back as far as Sylvia Park.

All northbound lanes remain blocked and diversions are in place, with SH1closed to northbound traffic from the Ellerslie-Panmure Highway interchange.

Motorists heading north on the Southern Motorway are advised to get off before Ellerslie, or use SH20 via the Waterview tunnel, to travel north via the Western Ring Route.

"Police are working to open at least one northbound lane as soon as possible, however there is already significant congestion and delays are expected," a spokesman said.

"We are advising all motorists to avoid the area if they can."

The Serious Crash Unit is at the scene.

NZTA said the Eagle helicopter landed twice on the motorway.

A motorist who passed the scene said they saw a person lying on the motorway. 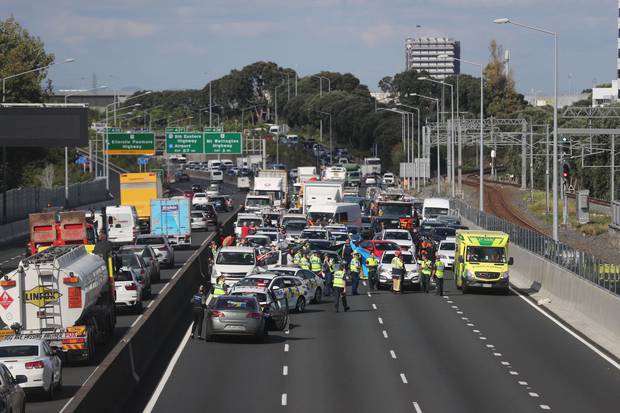 The crash in the city-bound lanes of the Southern Motorway. Photo / Doug Sherring

"There was a police officer trying to resuscitate them, and a whole lot of blood, a pool of blood, on the road. It did not look good," the motorist said.

"I don't know what happened, there didn't seem to be any crashed cars anywhere."

She saw two police officers, the police Eagle helicopter landing on the motorway, and several more people attempting to reach the person from the nearby Ellerslie Train Station.

"It is not every day you see a police helicopter blocking the motorway."

A police spokeswoman said the Eagle helicopter was requested to assist because it would be the quickest way to get to the scene. 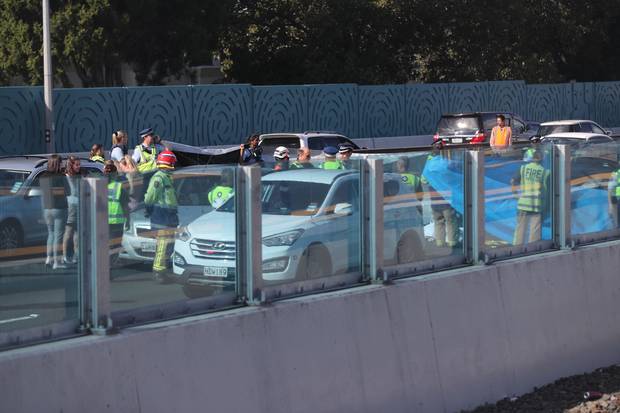 The scene of the incident. Photo / Doug Sherring