The Auckland Harbour Bridge has been fully reopened after today's protest action - but motorists have been warned to expect delays on the motorway network.

Police have confirmed 11 people were arrested, and said those arrests happened after multiple protestors failed to adhere to earlier set conditions with authorities.

A police van was also damaged in the protest.

"Over the past few days, we had received information that there was a group of people intending to do a march over the Auckland Harbour Bridge," Superintendent Naila Hassan, Waitematā District Commander said.

"We engaged with that group over the last few days, with a view to deterring them from undertaking unlawful activity. We continued to negotiate with that group this morning at Onepto domain however they were adamant they wished to march over the bridge."

Hassan said as a result of police "advising them of the serious safety concerns and the risk that they posed to themselves as well as other road users", they agreed to drive their vehicles over the bridge.

"We made an agreement with this group that they would travel at a set speed that would not cause undue risk to themselves and other road users."

"As they went over the Harbour Bridge, they failed to agree with the conditions we had set and started to undertake unlawful activity," Hassan said.

FINAL UPDATE 2PM
The delays are now EASED on SH1. Thank you for your patience. ^FP https://t.co/S8eRoKoYSp

"They slowed their vehicles whilst on the Harbour Bridge, brought them to a stop and a number of people jumped out of their vehicles. Thankfully we were prepared for that action and our staff acted very swiftly and professionally."

"They acted in a manner that was very professional and very swift to bring this dangerous situation under control."

Eleven people were arrested on the bridge. Charges some face include driving-related charges, obstruction, resisting arrest and also assault on police

"I just want to highlight the behaviour these people demonstrated today was extremely selfish and incredibly stupid behaviour."

NZTA said while a large backlog earlier had eased, delays were likely to continue for some time.

Protesters in a marked truck and a procession of cars were earlier escorted across the Auckland Harbour Bridge today by half a dozen police cars.

The escort happened about 12.30pm after a large police presence congregated at the northern entrance of the Auckland Harbour Bridge in anticipation of "planned protest activity".

Those lanes have now been reopened.

There was evidence of a smashed-up police van and a "wailing" woman was taken into custody at Onepoto Domain near the entrance to State Highway 1 on Auckland's North Shore around 11am.

Surrounding the white truck with the words "Mana News Live" printed in large orange letters on the side were numerous other cars with flags out their windows.

The procession of cars shortly after midday was travelling very slowly and constant honking could be heard on the harbour bridge as they crossed.

The Mana News company describes itself as an alternate news source concerned with disinformation. The group has aligned itself with the parliamentary anti-mandate protests in Wellington.

Both police and NZ Transport Agency confirmed this mornng they were aware of a planned protest, with the intention of pedestrians crossing Auckland Harbour Bridge on foot.

Witnesses at Onepoto Domain on Auckland's North Shore on the entrance to the harbour bridge have described around 50 police officers and over a dozen police cars parked near the on-ramp entrance.

Images from the scene at 11am today only showed two protesters - one man flying a United Tribes Flag, and a woman who was arrested by officers while "wailing". 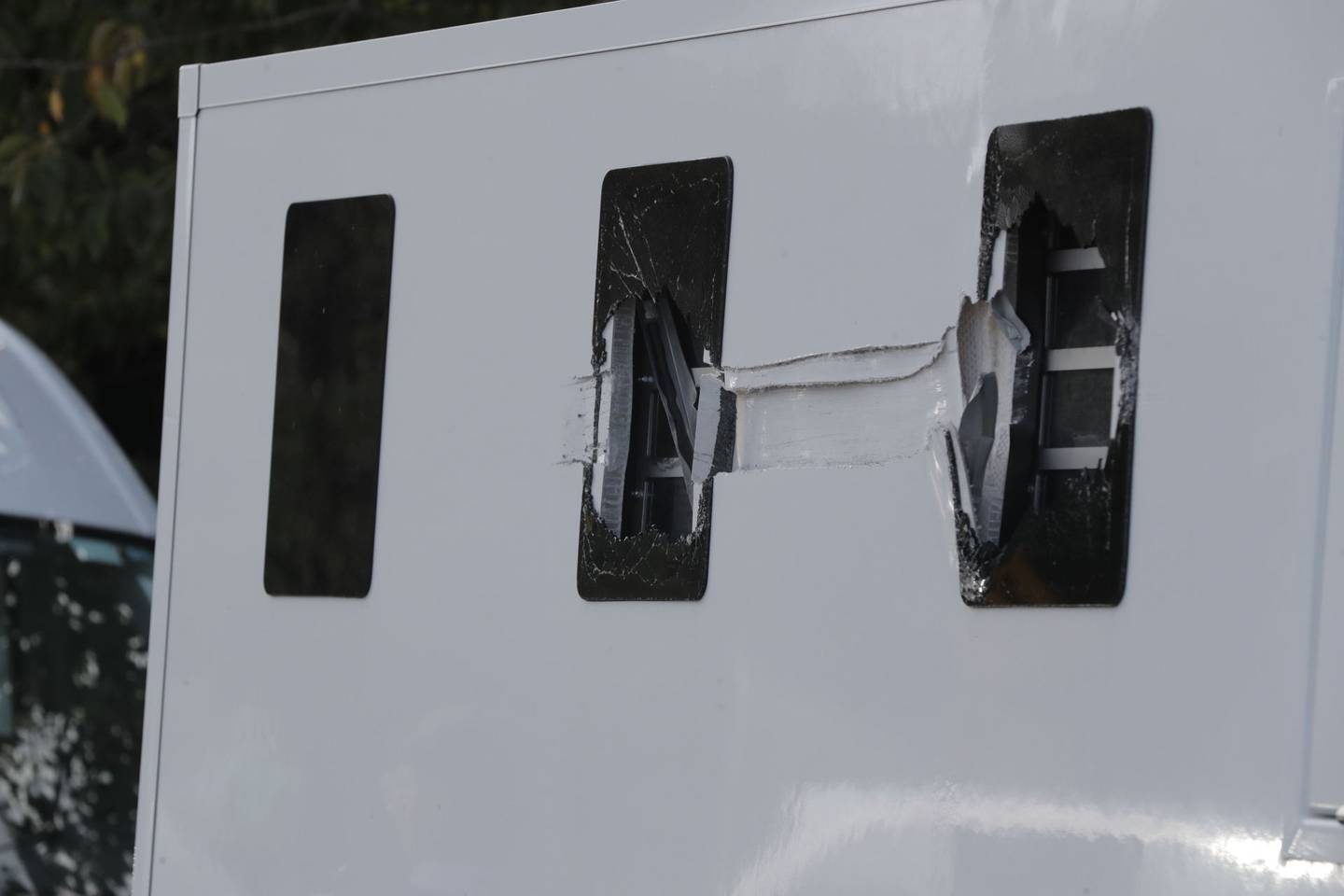 A smashed police vehicle at the scene. Photo / Michael Craig 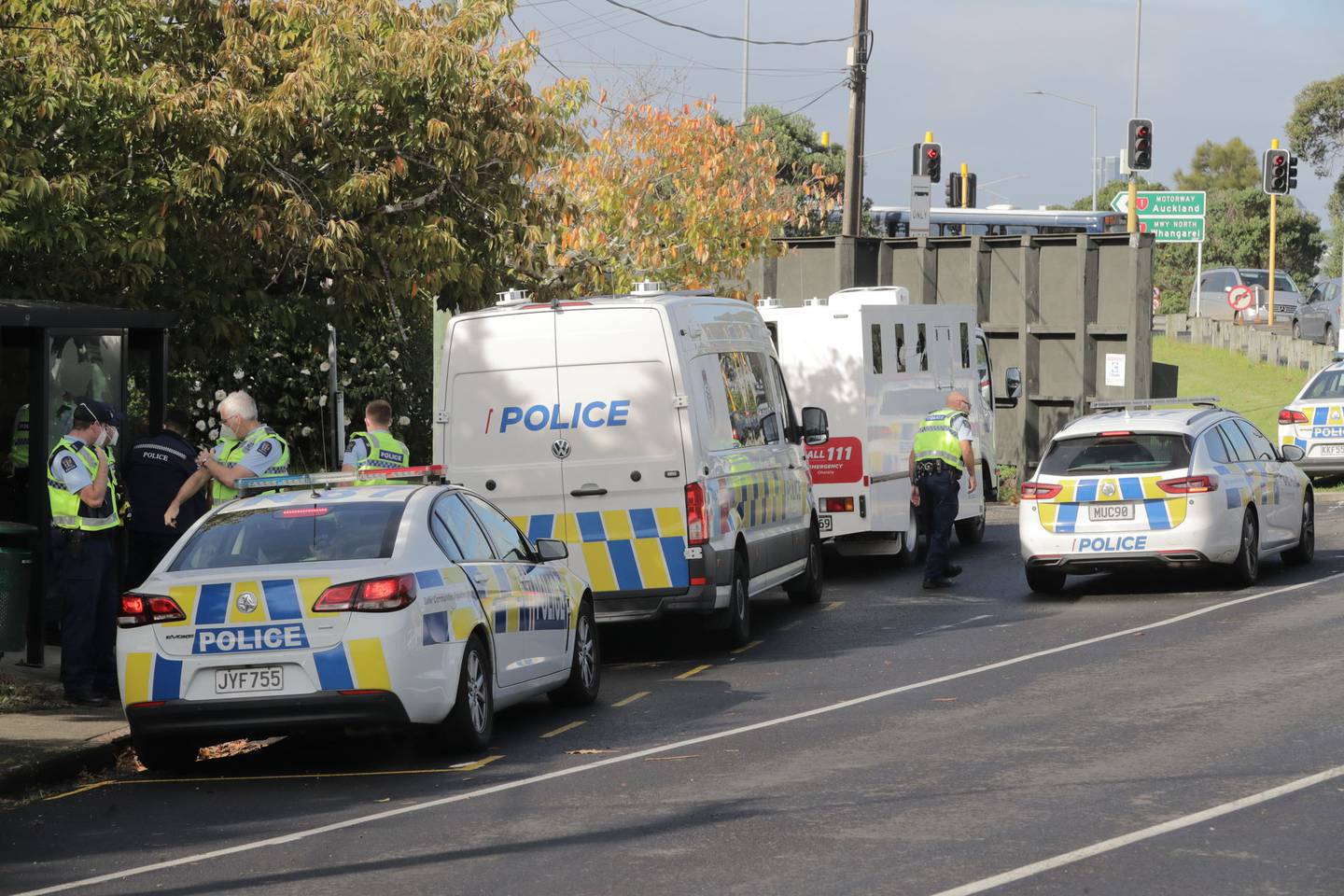 Police cars at the Onewa Road on ramp to SH1. Photo / Michael Craig

It is unclear at this stage what is the cause of the protest.

NZTA announced around this morning online they were aware of the protest and precautions were in place.

"Waka Kotahi is aware of potential protest activity in the vicinity of Auckland Harbour Bridge. Waka Kotahi has not and will not approve access for pedestrian access on any part of Auckland Motorways including the Harbour Bridge," the transport agency posted on their Auckland Facebook page.

"NZ Police have engaged with protest organisers and are managing the response."

Police also confirmed they are attending in anticipation of the protest. 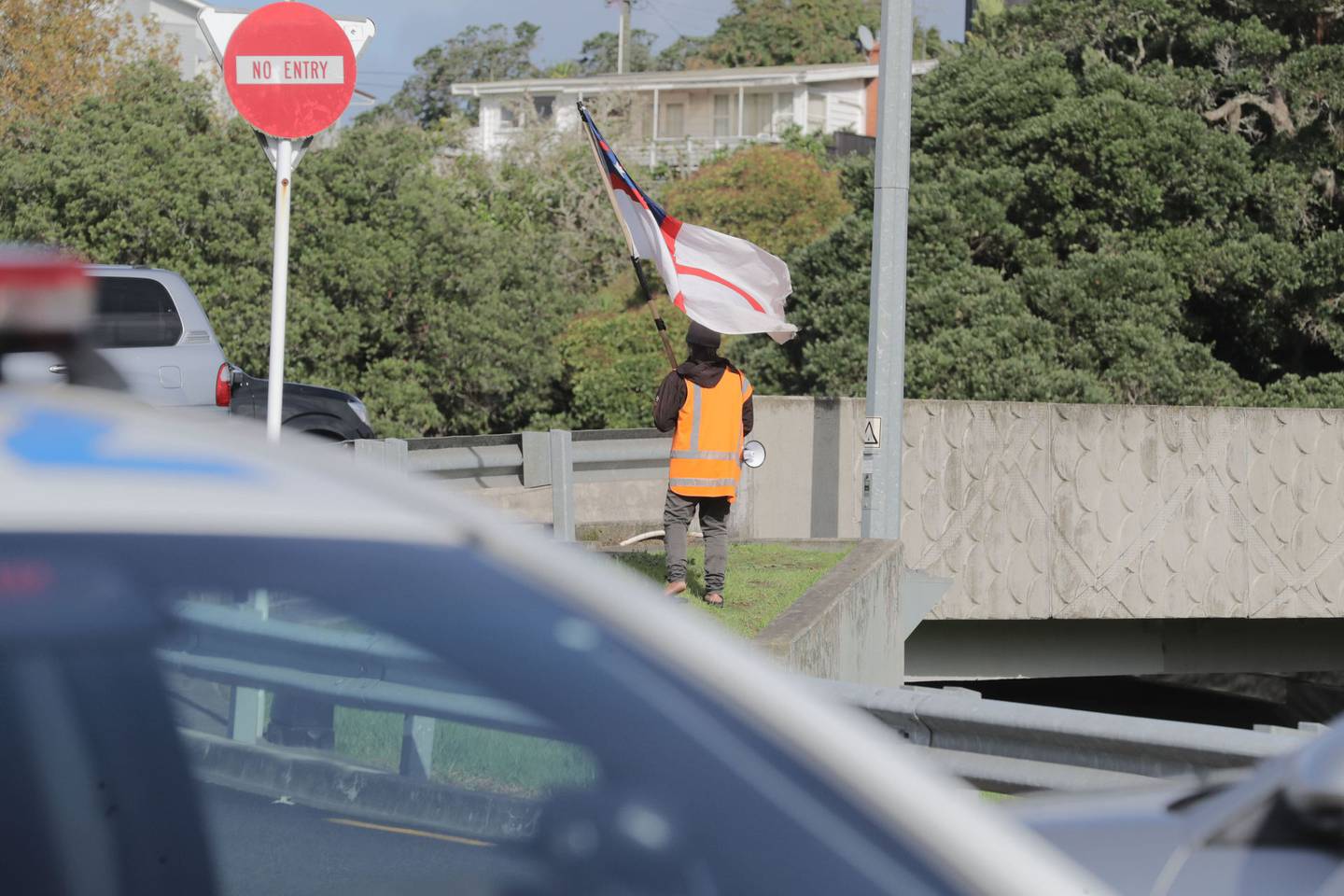 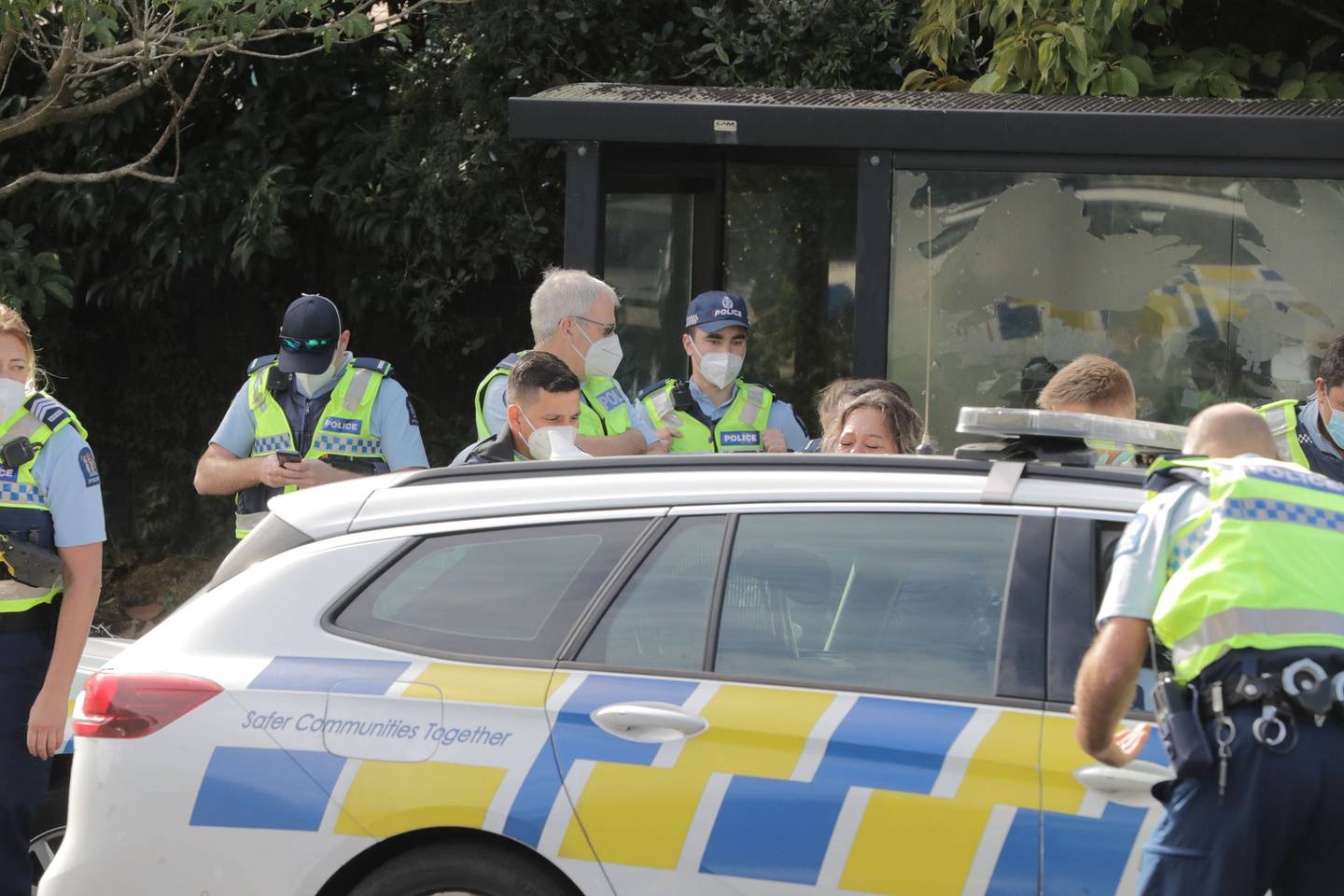 "Police are aware of planned protest activity in the Central Auckland area and are monitoring the situation. Police will respond if issues arise."

There are also around eight parked police cars on the Onewa Rd on-ramp to State Highway 1 leading onto the bridge at Northcote Point.

The cars are parked on one lane of a two-lane road but traffic is still flowing freely.