Bizarre markings on the floors of bedrooms being recarpeted have left an Auckland couple wondering about the history of their old villa.

The pair were in the process of recarpeting the Okura house they've owned for 30 years when a pentagram and a ritual circle were discovered etched into the floors.

The wife said they have no idea how or when the markings got there and they were completely shocked when they discovered them in the villa's bedrooms.

"My husband and the carpet layer pulled me in and showed me and I thought 'oh my goodness'," the woman told the Herald.

"Then they started on the other bedroom and the carpet layer called me again and said I might want to check this one too.

"The strange thing is we've had our carpet laid three times ... and it hasn't been pointed out to us before but the first two times we weren't there." 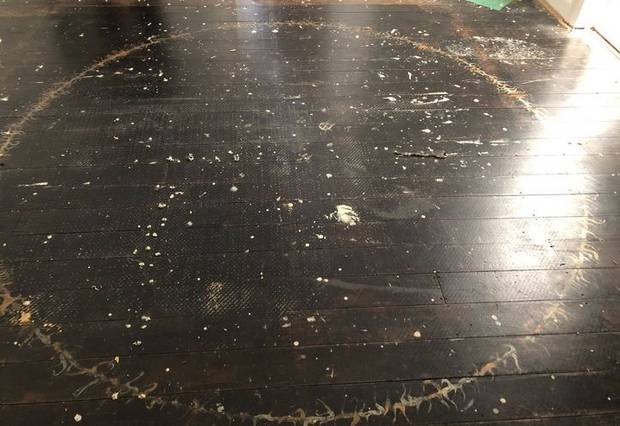 The history of the house is largely unknown and the home owners now plan to contact Auckland Council to try and find out more.

However, she said it was built on Shelly Beach Rd, St Marys Bay, near the Pt Erin Pool in 1904 by a timber merchant. The current couple moved the house to Okura 30 years ago.

"I'm curious to go to Auckland Council with the address and see what the historical details about the house might have been," the woman said.

She said the couple doesn't have any "solid" religious beliefs and said this was the first time anything strange had been found in the villa.

The woman said it was a bit of a mystery and yesterday posted pictures of the markings to Facebook asking for help to clarify what they were.

"There's no weird feeling or vibes or things like that it's just a normal family home with strange drawings on the floor we never knew about," the woman said.

"I believe there is something occult about it because we've all read or seen movies with those items described but I haven't had a chance to explore."

On Facebook, opinions were split about whether the markings were for pagan worship, devil worship or even Christian worship.

The couple had the carpet replaced twice before the markings were made known to them. Photo / Supplied