Transport bosses have apologised for Auckland's "horrific" traffic delays and warned that the harbour bridge remains "vulnerable" despite overnight repairs.

In the meantime the bridge remained in a "vulnerable state".

Heavy vehicles are still being urged to avoid the bridge and to use the Western Ring Route instead.

Gliddon thanked Aucklanders for their patience during the "horrific" delays.

The repair team was sourcing the steel and working on the design, which would then have to be peer-reviewed by other experts.

This would take a few weeks to complete and be installed.

Gliddon thanked all members of his team for working flat out to try and get traffic moving again over the bridge.

He was very relieved when temporary repairs allowed transport teams to open two more lanes over the bridge this morning.

Teams would monitor the performance of the bridge every day.

"Because if we have any concern, we will 100 per cent shut it down again," Gliddon said. 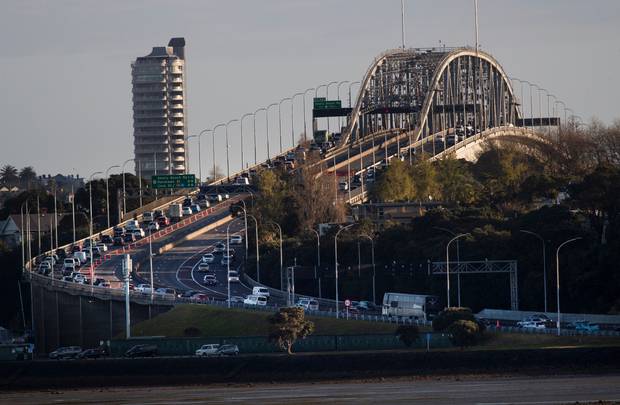 NZTA did not yet know how much the repairs would cost, the overnight repair was all about speed and safety.

A permanent fix was much more complex, Gliddon said.

Then it would need to be double and triple peer reviewed by other experts, Gliddon said.

He said the bridge was still in a "vulnerable" state.

That was why two lanes remained closed and heavy vehicles were recommended to take the Western Ring Route if possible and the speed limit had been reduced to 50km/h.

The permanent fix would take four to five weeks to be installed at which point the bridge would operate as normal again.

The time taken in completing the repairs was all about the calculations and equations of making sure the fix worked as expected.

Gliddon said he thought Aucklanders would have been relieved to see two more lanes opened this morning after the temporary repairs.

This meant the run into work was a lot smoother than the past few days, he said.

Design consultants Beca would design the permanent repair of the bridge. Their design would then be peer-reviewed by other consultants.

Gliddon said NZTA had not made a final decision on the preferred option for a second harbour crossing. However, it was likely to be a tunnel.

Auckland motorists have endured a painful week of gruelling traffic jams stretching from the south of the city to the north and west.

A freak gust of wind on Friday morning blew a truck into a metal support strut, damaging the bridge and forcing engineers to close four of the eight lanes.

Specialist bridge engineers and fabricators assessed the damage, designed the new strut, calculated and planned the repair as well as manufactured the strut itself.

Waka Kotahi NZ Transport Agency said: "We had perfect weather conditions on the harbour bridge overnight and so progress was much faster than we had hoped.

"There was very little wind, good temperatures and visibility - which meant the team were able to get the new section installed and carry out the testing all in one night."

The fix meant three lanes were being opened to traffic coming from either side of the bridge from early this morning.

NZTA said although that was hugely positive for the public, it was important to note that the bridge is still "compromised", so loads on it will need to be managed carefully.

"This will remain until the permanent solution is in place and the bridge can support its full weight capacity again."

The crew involved in the overnight work carried out real-life tests to ensure the bridge was performing the necessary design specifications and requirements, NZTA said. 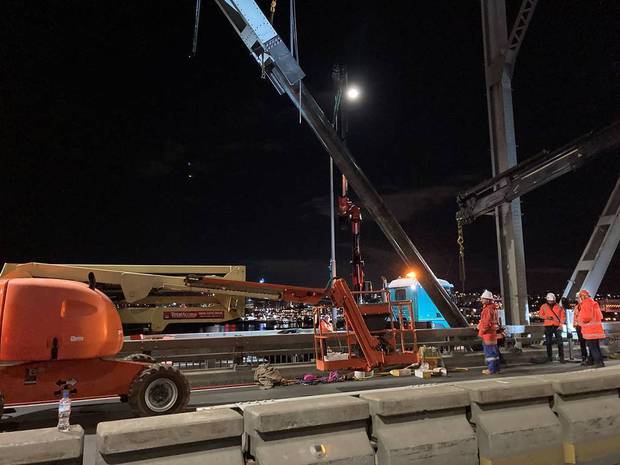 Heavy vehicles were brought in for that testing.

However, no overweight vehicles are allowed across the bridge at the moment - and they are being asked to stay away until the permanent fixture is installed.

Work is now moving towards a permanent repair to reopen the bridge entirely. But NZTA warned that could still be "weeks away".

The bulk of that permanent solution involved the calculation and peer review of the new permanent strut in relation to how it will affect the performance of the whole bridge.

"This includes careful calculations on how to re-balance its load-bearing function.

"The new modelling is necessary because the materials of the new structure will not exactly match those that were installed 60 years ago.

"Teams would monitor the performance of the bridge every day."