A 9-year-old girl was playing in shallow water at Eastern Beach when she was attacked by a dog.

Neal Holt was sitting less than 10m away from his daughter Christiana when a rogue staffy-cross put its face towards hers.

"We starting getting up, thinking 'no, this isn't on' and all of a sudden she screamed."

The dog had latched onto his child's ear, drawing blood.

"I just couldn't get to her fast enough," Holt said.

He and his wife managed to wrestle the dog away from Christiana and carry her back to their nearby beach blanket.

"I chased off after the dog and some 30ft down the beach, there was a little girl, younger than my one ... and it actually went towards her," Holt said.

Holt warned the girl's parents and continued to chase the dog, finally seeing a man slowly walking down the beach holding a tennis ball, oblivious to what had happened. 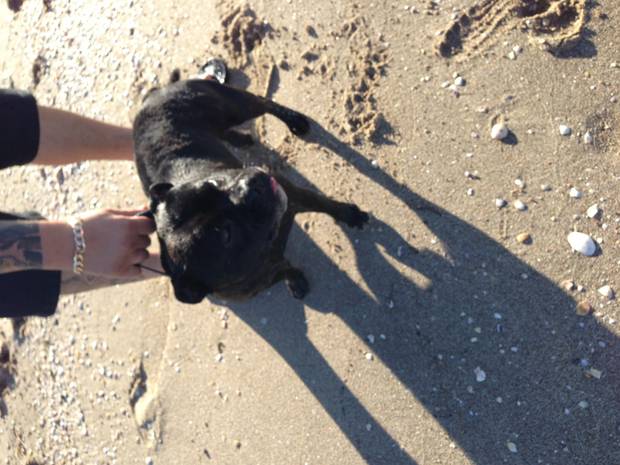 Dad Neal managed to snap a few pictures of the dog that attacked his daughter before the owner fled. Photo / Supplied

Holt said the owner apologised and said his dog had "run off".

He asked to see how Holt's daughter was, but Holt said he didn't want the dog near his already upset child.

Holt managed to snap a few photos of the dog, whose registration was "at home," the owner told him. 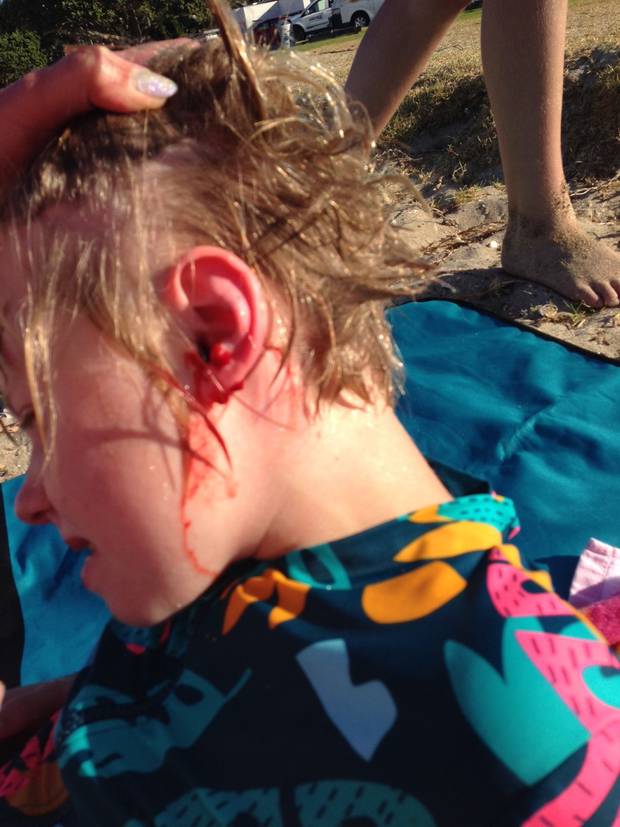 Nine-year-old Christiana Holt was taken to hospital after a dog attacked her on Eastern Beach. Photo / Supplied

The owner said he would put his dog in the car and return, but suspicious of the man, Holt followed him as he started to run towards a waiting car.

"The passenger side of the door was open, he jumped in and cleared off."

Holt didn't have time to get the fleeing car's registration number, he said.

Christiana was taken to Botany Accident and Emergency and then to Middlemore Hospital to treat multiple lacerations in and around her ear.

The injuries are expected to leave a small scar.

"It's something that didn't have to happen to her," Holt said.

"It's something that nobody should be going through," Holt said.

Holt called the police immediately after the attack, which happened just after 6.30pm on Tuesday evening.

He was directed to Auckland Council, to whom he complained about the dog's behaviour.

"In the future, if that dog had a go at another child, the outcome could be far worse," Holt said.

Auckland Council's Kerri Fergusson said the council was investigating the incident and working with the family to try identify the dog's owners.

"We want to send our best wishes to the young girl involved in this incident and wish her a speedy recovery.

"We have very strict rules around dog control in public places and even in off-leash areas, owners are expected to have their animals under control.

Auckland Council would welcome any information which may help with their inquiries, she said.

Holt said that while the majority of dog owners are responsible, there are still some who don't follow the rules.

"Over the last week, it's been really hot and the beach had been packed," he said.

"It could happen to any child."

Holt thanked passersby by at the beach who ran to help just after the incident, as well as staff at Botany and Middlemore for looking after his child.

Anyone with information on the incident should contact Auckland Council.