A neighbours at war situation is brewing in the North Auckland suburb of Manly - over a planted-up berm which some think is an eyesore.

Its creator Dee Pigneguy says the berm - which has been planted with trees and flowers - is good for the environment and stops her yard flooding during downpours.

Dee explains to RNZ she planted the garden shortly after they moved into the house.

"Those drives over there acted like rivers and it came flooding across this grass, flooding down under and through the fence, and my garden I had put in ended up on the next door neighbour's property.

A sign proudly proclaims the garden as Bermland. Photo / RNZ

She says she started planting with bark chips and it slowly built up over the years to the point where it now includes lots of comfrey, scented geraniums and fruit trees.

Neighbours have complained, however.

"It's interesting, since I started a Facebook page about the berm we've got over 300 people now ... who walk their dogs, walk to kindergartens, all that, they always comment on how beautiful it is, they pick flowers, they look at the insects," she says.

However, Auckland Transport have sent Pigneguy a letter outlining the legal requirements for berms, which include restrictions from planting anything edible or having vegetation more than 60cm tall, and must have shallow roots.

She says if her berm were to fit those requirements, her property would flood. 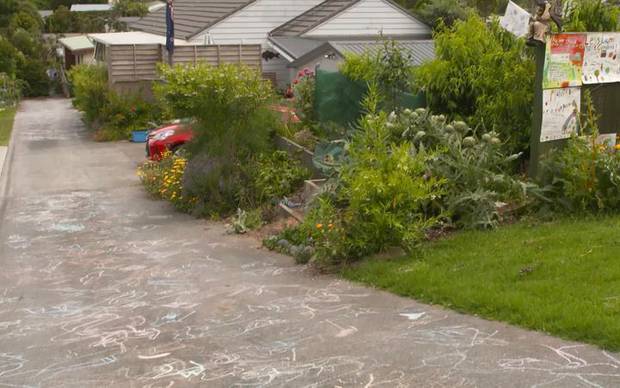 "I think Auckland Council need to look at 'bermaculture' - that's what this is, you've heard of permaculture well this is bermaculture. This is planting up your berm in a nature-friendly way that people love."

She also has the support of the local school where she teaches children about gardening, some of whom have written to Auckland Transport arguing the berm should remain as is.

-By Katie Doyle and Nick Monro of RNZ