A man suspected of starting an explosive fire in a west Auckland car yard early this morning was caught on camera, the business' owner says.

The fireball and massive plume of smoke at Select Wheels Ltd around 1am sparked multiple emergency calls from the public.

The company buys damaged vehicles from New Zealand and Australia and repairs them for sale. It has old vehicles sitting in a corner of its yard to use for parts - it was those cars that went up in flames this morning, causing an explosion heard for miles around.

Four fire appliances were sent to the scene, and police cordoned off a large area while they responded.

A fire investigator had returned this morning but has since left the scene, Khullar said. However, the police were still with him around midday checking through CCTV footage. 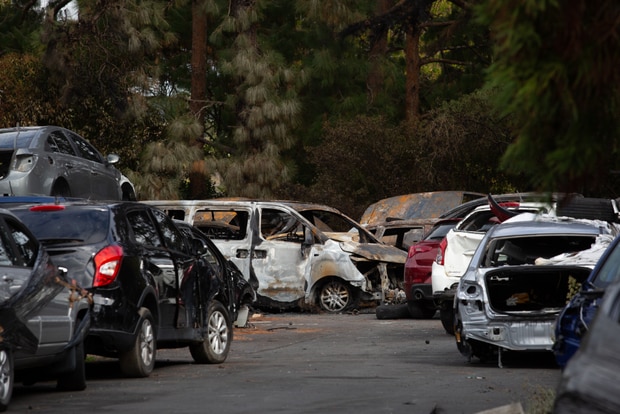 Police are combing through CCTV footage from a west Auckland car yard where a massive fire started around 1am, destroying 12-15 scrap cars. Photo / Sylvie Whinray

Khullar said the video footage shows a man walking in around midnight, looking at various cars. He believes more people were involved but they were not caught on camera.

Select Wheels has issues about once a month with people breaking in and stealing car parts such as batteries and wheels off cars that have been repaired.

"They were trying to steal something...we have absolutely no idea what has been taken. Then 45 minutes later we can see the fire's been lit," Khullar said.

The man's face was clearly caught on camera on entry, although he had later covered his face with a hoodie.

Khullar was unsure what the thief or thieves were after. A variety of cars had been damaged and broken into. "He was walking around checking cars, getting into one, getting out, lighting a cigarette - it's all been captured."

He was thankful the fire had been started in the corner by the wrecked cars area and had not affected the building, which is shared with other businesses. But Khullar was surprised by the strength of the explosion, which members of the public reported as sounding like gunshots. There was not usually petrol left in the donor cars but there could have been some residue in the fuel tanks, he said.

Employees had come to work on Wednesday while maintaining safe distancing procedures due to Covid-19.

"We were trying to assess whether it was worth coming in or sitting at home for another week...who's thinking of buying a car at this point?"

The burned vehicles were not insured but could still be sold for scrap metal, he said.

Detective Senior Sergeant Marcia Murray, of the Waitematā CIB, said police were called to the fire at around 1.07am.

"At this stage we are considering the fire as suspicious and Police are working with Fire and Emergency investigators as part of our inquiries.

A scene guard has been in place at the property overnight and a scene examination is due to take place today. 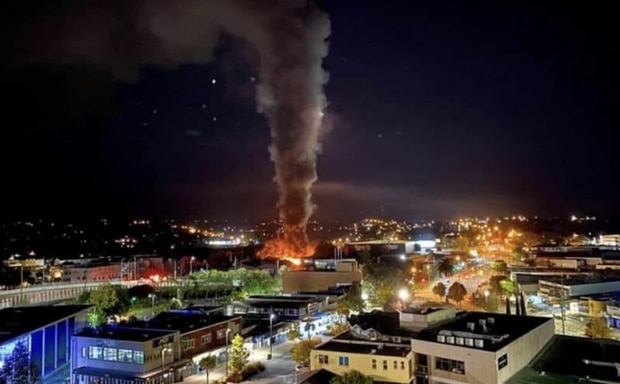 The explosive blaze sent smoke soaring into the air, destroyed at least a dozen cars and singed nearby trees. Photo / Armin Pasagic