A concerned resident and a surfer, allegedly flouting the country's lockdown rules, were involved in a heated discussion at Auckland's Takapuna Beach today.

A man, who did not want to be named, witnessed the confrontation after taking photos of a group of five surfers in the water at the southern end of Takapuna beach early today.

It's not the first time surfers around the country have been in the spotlight; police have spoken to others at Piha, Muriwai and Gisborne.

The photographer, who was also surprised and disappointed to see so many surfers in the water, said he caught the surfer 'flick the bird' at another resident annoyed that he was allegedly breaching the lockdown.

"I feel uneasy about doing this but I get pissed off about people doing this sort of thing and it was an uncomfortable moment on the beach this morning.

"I was down there having a walk this morning and I often take my camera with me as I love doing sunrise photography. 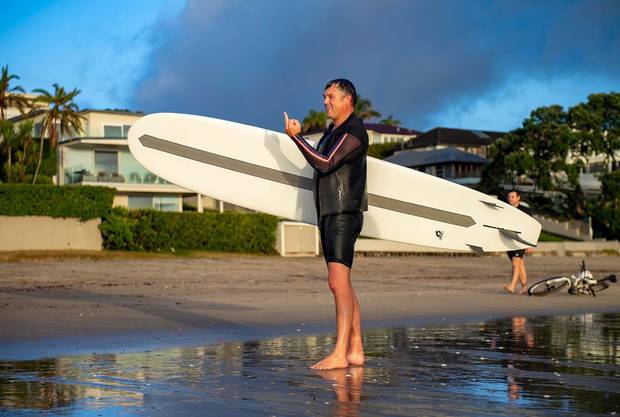 A man reacts after a heated conversation about him breaching the Covid-19 lockdown rules by surfing this morning. Photo / Supplied

A concerned resident questions a man why he is deliberately flouting lockdown rules by surfing at Takapuna beach this morning. Another young resident, to the right, was spoken to by police yesterday.

"I was quite surprised to see five surfers in the water. There were a lot of people from the public walking up and down with dogs etc. They were clearly fed up with them, it was ridiculous."

The man said he was waiting to get a silhouette photo of a surfer coming out of the water when one walked past him.

"He walked straight past me and said 'good morning' and he wandered up.

The longer the pair chatted, the more heated it got and the more people began watching.

"The guy was clearly asking 'what on earth are you doing during the lockdown' but [the surfer] was clearly not bothered about that and then gave him the bird."

He wasn't sure exactly what was said but the surfer was trying to justify being in the water, while the resident was "clearly not happy explaining the lockdown rules and why are you so special".

"The surfer who came out of the water...he was more concerned the dog walkers on the beach who didn't have their dogs tied up on a leash." 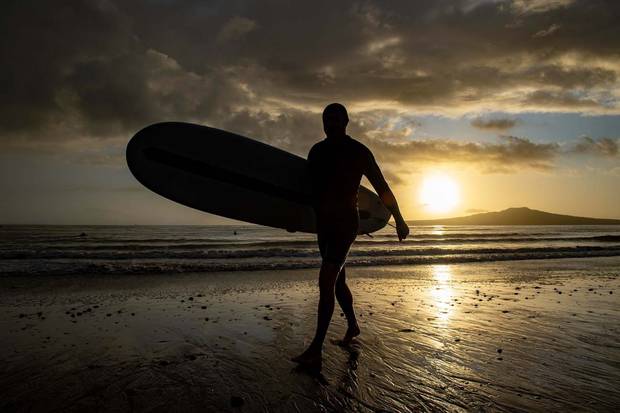 A man leaves Takapuna beach after a surf just after sunrise this morning. Photo / Supplied

He said there was also a young man on the beach who was told off by police for surfing at the beach yesterday.

His parents had banned him from surfing so he'd popped down for a look and also took photos.

"He didn't think it was a big deal and piped up to the guy who was complaining and I turned round to this small kid and said 'look, I would just keep your gob shut if I were you'.

He said residents were "just fed up with it" because they were worried about having their beach shut down.

"The surf conditions have been a bit of a magnet for surfers [today]. There were a few small waves ... but it doesn't give them any right to go down there and flout the rules.

"You could see so many people on the beach who were walking were like, 'what the hell are you idiots doing'.

Last week he saw the one or two paddleboarders at the southern end of Takapuna beach as conditions were "like a pond" but today was the first time he'd spotted surfers.