Lime says it is "devastated" by the death of a 59-year-old man who was killed while riding one of its e-scooters last night in central Auckland.

It was the first fatal accident involving the controversial e-scooters in New Zealand.

"We are devastated to learn of this tragic incident in Auckland overnight, and our thoughts are with the victim's family and friends during this extremely difficult time," a Lime spokeswoman said.

She said the company had been in contact with local authorities and would continue to assist however possible.

Meanwhile, Auckland councillor Christine Fletcher is calling for "a complete review" of the e-scooters in a bid to introduce tighter safety regulations.

Fletcher - who was almost knocked over by a Lime scooter last year - says there needs to be a reduction to the speed limit and compulsory helmets should be worn.

"One death is too many deaths," she said.

An Auckland Transport spokeswoman said they were sad to hear about the incident but had no further comment to make.

Police confirmed the incident took place on a footpath beside Fanshawe St near the intersection with Bradnor Lane shortly before 10pm.

The circumstances of the death were unclear, police said, but the man had been riding the e-scooter. His death is not thought to be suspicious and has been referred to the Coroner.

Detectives from Auckland Central along with staff from the Serious Crash Unit were at the scene for several hours and the man's body was taken away by a hearse shortly before 1am. 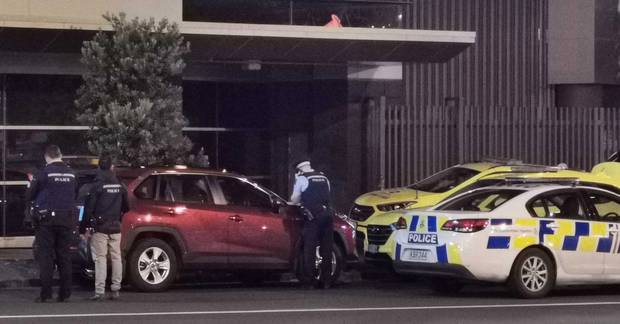 Police officers at the scene of the crash. Photo / Supplied

Police at the scene said a post-mortem examination would take place on Tuesday morning to determine the cause of death.

A small pool of blood could be seen where the male was lying.

The Lime scooter was removed as evidence and will be investigated.

Five police cars, a serious crash unit and multiple police officers were on the scene about 11.30pm. St John also attended the incident before leaving the scene.

One of the first people on the scene told the Herald: "Police won't tell us anything but there is a scooter right next to him laying on the ground. They've covered him in a sheet.

"I was going to the bus stop. There's a scooter next to the gentleman. It looks as though he's come out and maybe hit something. I don't know what happened. I was walking down the road, I nearly walked over the gentleman."

Police are asking anyone who witnessed the incident to contact Auckland Police on 09 302 6400. 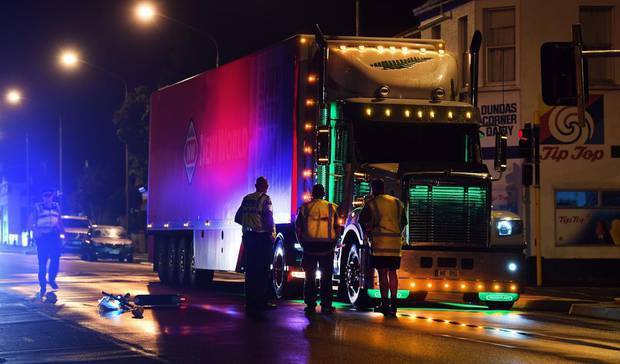 Renee Whitehouse suffered lifethreatening injuries after she was hit by a truck while riding a Lime scooter in Dunedin. Photo / Stephen Jaquiery

Last night's death comes five months after a Dunedin woman was hit by a truck while scootering through the city after visiting the supermarket.

The 26-year-old was rushed to Dunedin Hospital, where she underwent surgery and was in a serious condition. The emergency and intensive care teams were able to work her to recovery.

Following the incident Lime signed a memorandum of understanding (MoU) with the Dunedin City Council that included a requirement for scooters to be removed from public places each evening.

The eight-page November briefing said there could be more safety incidents "in the short term" and the government was looking at safety measures. It advised councillors not to reduce the scooters' speed limit.

"Staff advise that the best way forward in the short term is to implement a safety communication and education campaign immediately," the memo said.

But it acknowledged some people would ignore the campaign, and warned that Auckland Transport and Auckland Council could be criticised for not taking stronger action.

If safety issues escalated, the council was advised to look at reducing the number of e-scooter rentals and cutting the scooters' maximum speed.

Several other people have been seriously injured while riding a Lime scooter including Amy Gianfrancesco who was left with a fractured neck, a lost tooth and severe facial bruising in December last year.

The scooters have been blamed for multiple accidents, and have faced a backlash from pedestrians and councils concerned about their high speeds.

Most recently, Lime pulled e-scooters from Lower Hutt for a "seasonal" pause and no set date has been made for their return.

The US company had 300 scooters on streets in the Hutt, with around 52,000 riders clocking more than 225,000 trips since it launched in the area in December.

Last week a spokeswoman for Lime said, "We will be temporarily pausing operations in the Hutt Valley over the winter. Seasonality is a normal part of the e-scooter industry and we intend to resume our premium service later in the year.

A glitch appeared in Auckland's lime scooters in February, which led to Auckland Council implementing a temporary ban.

Lime had to agree to a number of conditions before the scooters were deemed safe to ride.