A walker who watched from a ridge top as a surfer wrote a desperate message of help in sand on a secluded west coast beach initially thought he was writing "hello".

Karekare locals Vanessa Ingraham, 36, and her friend Dace Kalnina, 32, were hiking on a coastal track yesterday afternoon along from Karekare Beach when they noticed a lone man composing a message just above the high-tide mark on Mercer Bay.

Unaware the man was in dire straits after losing his surfboard and injured when he was pounded against rocks, the pair paused to take in the view high from their vantage point.

"We stopped and then we see this man trying to write with his leg something in the sand," said Kalnina.

"We wondered if he was being friendly and he started writing H, E, and we figured he was going to write a nice message of hello," said Ingraham.

"Luckily we stuck around. The L became a P. At that point he finished writing and he collapsed onto the sand."

Kalnina said while they initially wondered if it was a prank, it took just a couple of seconds to realise the man was in trouble and they needed to act.

"We shouted at him but because we were so high up and it was windy we couldn't really understand what anybody was shouting back but he did see us and he was waving back.

"He waved at us back while he lay down on the sand so that's when we realised it was serious."

She called the local North Piha Surf Lifesaving Club to come to the man's aid and sent the dramatic photo taken high above the remote bay, showing the man prone on the sand near the single-word message.

"They reacted immediately. They kept calling me back for an update so we stuck around for 20 minutes just to see what happened." 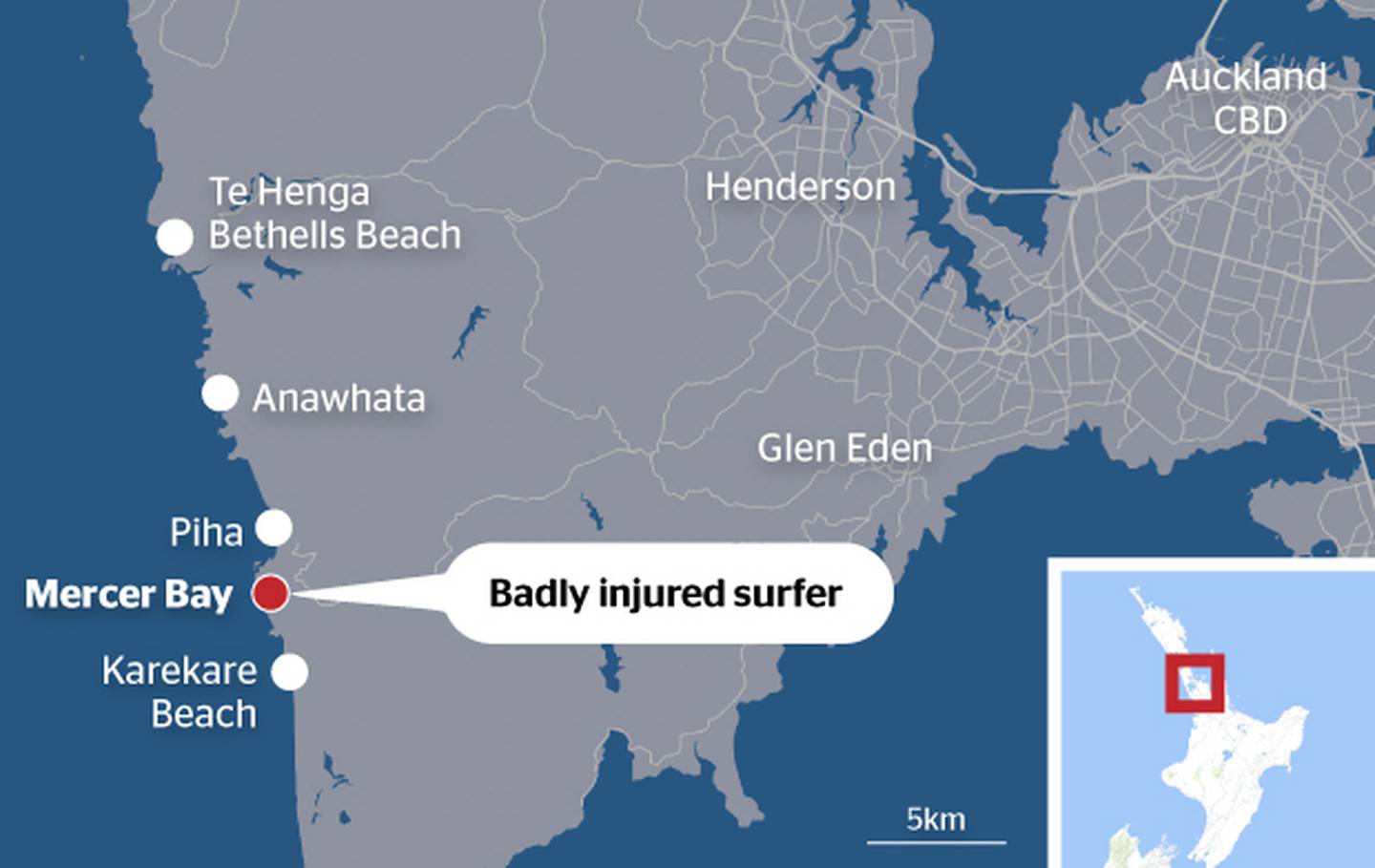 She said at one point the man managed to stand up and walk around but had a severe limp. They later discovered he had suffered a bad gash to his leg during his tumultuous ordeal in the heavy surf where he had lost his surfboard and once on land tried for two hours to climb through bush to get to safety.

Ingraham said the pair were concerned lifeguards would have trouble spotting the man from the sea.

"It was really rough. We watched the jetski come in and there was a big surf break. They took a little while looking for him before they took the risk themselves of coming into the beach," said Kalnina.

They later saw the injured man sandwiched between lifeguards on the rescue craft leave the bay headed to Piha for medical attention.

The women said they were pleased their outing had meant they could help though they insisted their role was very much behind the scenes.

Said Ingraham: "I think we were just lucky to be in the right place at the right time."

The friends said learning the man's wife had phoned police concerned he hadn't returned from his surfing trip gave them a great feeling they had done the right thing.

"I think taking that situation seriously and reporting it, even it was a prank, raises awareness in the community of looking out for each other, especially in such an isolated place where we live," said Kalnina.

"I was feeling a bit guilty I wasn't helping clients when I went for a hike. The universe gave us another opportunity to help," said Ingraham.

"The message in the sand is not visible from the walking tracks at the northern end of Mercer Bay, so it was very lucky the informant and her friend were at the southern end and able to see it.

"With Auckland in alert level 3, not as many people are out and about at the moment so it's also lucky someone was walking the track at that time."