A cyclist who was badly hurt in a collision with an electric bike is begging Auckland Transport to clarify rules around cycleways before someone is killed.

Dr Tony Hickey had a serious head-on crash with a man on an e-bike on May 14, while he was riding on the NorthWestern cycleway's Rainbow Path next to Unitec in Mt Albert.

Hickey was knocked out, so he doesn't remember much apart from riding down the hill and meeting a rider standing up in the saddle, biking uphill at speed. He understands the man was on the wrong side of the path and was on a motorised e-bike - although he can't prove it.

What happened next is pieced together from photos and damage to the bikes and his body. Hickey suspects he flipped and landed on his back, his bike snapping clean in half.

Luckily, an unknown paramedic was riding to work and stopped to help. The other rider involved also stuck around and left a phone number, but had limited recollection of events when Hickey spoke with him two days later.

Hickey woke up in Auckland Hospital in intense pain, unable to move his legs, his tearful wife at his bedside. He had a large haematoma and bleeding near his brain.

Hickey, a biological science professor at the University of Auckland, believes he could have died. The past month he's been slowly recovering, though he can only do half-days at work as he deals with back pain and headaches.

He has complained to Auckland Transport about poor visibility on the path, and asked for better signage and enforcement of rules using CCTV.

But he's frustrated that his complaints to Auckland Transport have not yet changed anything.

Despite everything, Hickey says he is a big fan of e-bikes because they get people out of cars.

"But there are a few numpties who haven't ridden for a while. It must be an amazing sensation...but they've got to realise they can come a cropper."

The Northwestern cycleway is billed as a safe way to get around the city while avoiding busy roads.

But Hickey is worried that the cycleway has become "awash with a***holes" who are endangering legitimate users, including children.

The cycleway had become a de facto road where self-powered cyclists were treated as a nuisance, Hickey said. "In fact, it is worse than a road because it is lawless and unregulated."

Visibility issues needed fixing, but those would not be a problem "if people do not overtake when they cannot see, and learn that ringing a bell, like tooting a horn in a car does not give you right of way, and the right to endanger others". 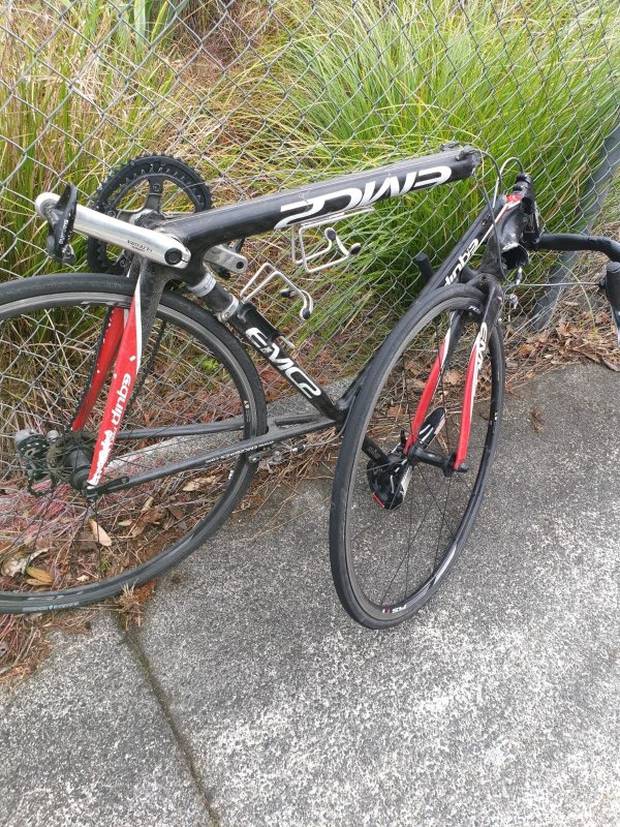 Hickey's bike was snapped in half in the collision, which he believes happened because the e-bike rider was on the wrong side of the path. Photo / Supplied

AT said it was "very sorry" to hear about Hickey's accident, spokeswoman Joanna Glasswell said.

"We have received [Hickey's] correspondence and we are currently investigating signage options for this part of the path, to remind people to take care on the hill and the approach to the rainbow section." No one else had complained about that section of the path.

"The Northwestern Path is one of our most popular routes for people riding bikes and as the number of people using it increases, we ask that everyone takes care, stays to the left, and makes space for people walking."

E-bikes are becoming increasingly popular on the cycling network and help remove some barriers to bike riding, Glasswell said.

AT "[expects] everyone using our shared paths to take care and be mindful of other users", Glasswell said - but the rules for e-bikes and scooters - including where they can be ridden - are set nationally by the New Zealand Transport Agency.

"There are no speed limits on cycleways but on the road ebikes are subject to the speed limits for all vehicles."

New Zealand's road code says e-bikes must be used on their lowest setting when on shared paths. Riders should keep left and cycle "at a speed that does not put others at risk".

Enforcement of the rules is the responsibility of the local authority and police, Walker said.