An Auckland woman looking for a productive, low-maintenance berm has fallen foul of Auckland Transport rules on berms and is calling for a change in the regulations.

Louise Burnie had begun converting the front garden and berm of her Torbay home shortly after she moved in this year.

Burnie was looking for a "no-mow option" and settled on the idea of a "food forest", planted with fruit trees and other edibles, which she planned to distribute to the community.

She laid down mulch across the garden and berm and set about planting, including peach, lemon, lime, mandarin and guava trees alongside rosemary and lavender bushes on the large berm in front of the property. 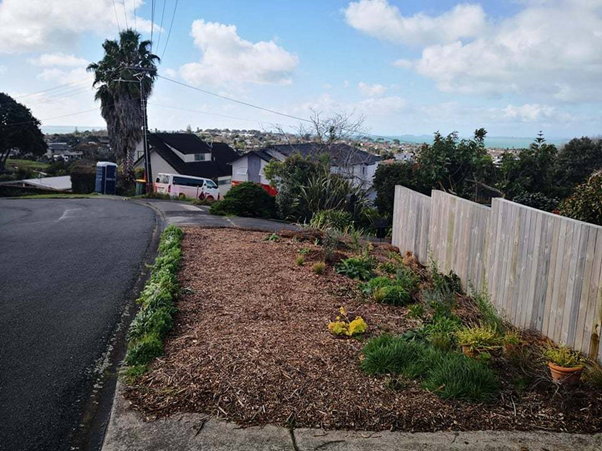 Yesterday Auckland Transport (AT) told her she was in breach of their rules and had 10 days to remove the mulch and plants, or pay $341.90 a day until they were removed.

Burnie told the Herald that she suspected that one of her neighbours had complained.

She said all the neighbours she had spoken to were in favour of the project but one resident was known for raising regular objections.

When Burnie relayed the news to a gardener who had been working on the property for her, the plantings were removed yesterday,

An AT spokesperson confirmed they had received a complaint.

"While Auckland Transport does not go searching for breaches of the guidelines, when a complaint is made, we are required to act," they told the Herald.

"We all do not have the same taste in gardens, people can make the call about their own property but they share the streetscape with their neighbours and we have to try to please everyone.

"If you want to plant in the berm you need a permit." 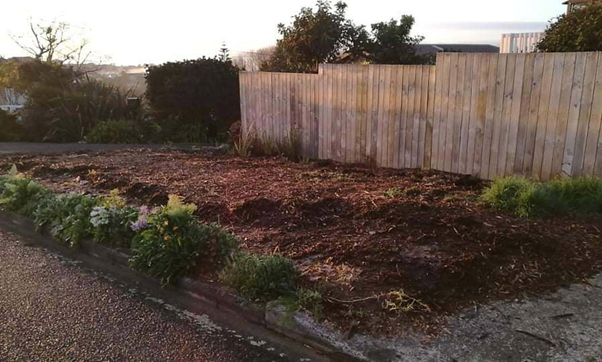 The berm after the trees were removed. Photo / Louise Burnie

The spokesperson also highlighted that private planting requires ongoing maintenance by landowners and may have to be removed and re-sowed with grass at ratepayer expense if the property changed hands.

Burnie admitted that she had not sought permission before planting the berm.

In response to Herald inquiries, AT contacted Burnie to discuss a compromise.

Burnie said she was happy with the move, saying she would love to plant the berm again and hoped it would be possible.

She also said that AT should consider allowing other forms of ground cover, such as thyme.

"[Thyme] will look beautiful, smell beautiful ... you can walk on it, you can drive on it but it's not something you have to mow all the time."

She said that maintaining a berm can be a "big ask" for some Aucklanders and a rule change would allow them to explore other options.

AT says that planting in the berm is usually only considered if it is behind the footpath so passengers can get out of vehicles without having to climb through a garden.